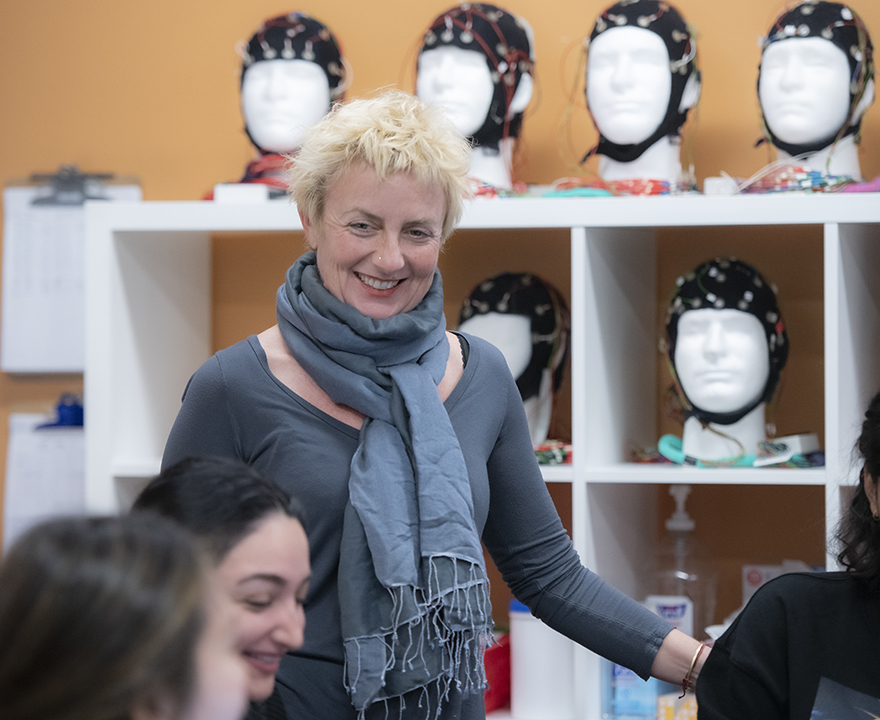 
The brain is a battlefield where cognitive domains vie for limited resources, and this appears to be particularly true during sleep. A University of California, Irvine-led research team has discovered that long-term memory consolidation and working memory processes that happen during rest do so at a cost to one another. The study, published in Proceedings of the National Academy of Sciences, is the first to illuminate this critical trade-off in the human brain.

“Separate offline neural mechanisms underlying long-term and working memory processing during sleep compete with one another, which means that the brain has to toggle between the two,” said co-author Sara Mednick, UCI professor of cognitive sciences. “Our findings provide the first evidence of this sleep switch mechanism.”

The director of UCI’s Sleep and Cognition Lab, she specializes in research on the critical role rest plays in human memory. For this study, Mednick’s research team focused on both long-term memory – the ability to remember information such as birthdays and important events for an extended period – and short-term/working memory – the ability to hold information such as a phone number or grocery list for a short period of time and then forget it when it’s no longer needed.

“The former is processed in the hippocampus and relies on the production of sleep spindles – short bursts of cortical activity measurable with electroencephalography – to consolidate,” said study co-author Pin-Chun Chen, a UCI graduate student in cognitive sciences. “The latter is processed in the frontal cortex and depends upon the parasympathetic nervous system – the body’s natural brake that lowers cortisol levels and aids in the ‘rest and digest’ function, measurable by heart rate variability.”

Research has found that both working memory and long-term memory rely on offline periods that include sleep to effectively accomplish their tasks. These two very different types of memory processes happen during the same cycle of slow-wave sleep, which occurs during the first three to four hours of slumber.

“We were interested in determining how sleep can be doing these disparate things at the same time. Specifically, we wanted to figure out what happens in the brain during slow-wave sleep that it can record long-term memories while also improving short-term/working memory,” Mednick said.

To do so, the team relied on work previously conducted in the Sleep and Cognition Lab that found that the sleep aid zolpidem – Ambien’s generic equivalent – boosts sleep spindle activity in the hippocampus, resulting in improved performance in long-term memory. In this new study, participants were pretested using operation span tasks – remembering strings of letters presented in between math problems – and word-pair association tasks – remembering presented word combinations – to get baseline measurements for working memory and long-term memory performance, respectively. Then subjects were given either zolpidem or a placebo and slept in the lab while researchers monitored their heart rate variability with electrocardiography and brain activity with electroencephalography. Electrooculography was used to measure eye movement to determine sleep stages at various intervals during the night. Upon waking, participants repeated the previous night’s tests.

Those who had ingested zolpidem performed better on the long-term memory tasks but worse on working memory tasks when compared with those who had taken the placebo. The findings aligned with EEG and ECG recordings showing increased spindle production and decreased heart rate variability among subjects who had ingested zolpidem and vice versa with the placebo. Notably, the extent of the trade-off between the improvement in long-term and working memory predicted the amount of bias found in performance the next morning; more spindles/less heart rate variability led to more long-term memory/less working memory.

“By understanding how memories are formed, processed and retained, we can understand how they can be improved, as well as how memory abilities can falter due to aging or disease,” Mednick said. “These findings are important for further work aiming to understand the cognitive consequences of pharmacology, as well as sleep’s impact on the aging brain and on those with neurodegenerative disorders such as Alzheimer’s and Parkinson’s.”

As for optimizing performance in both long- and short-term memory, she added: “The importance of a good night’s rest can’t be overstated. Skip the urge to binge-watch TV and instead get to sleep as early as you can so that you maximize every minute of your slow-wave sleep cycle.”

Additional co-authors include Hamid Niknazar, a UCI postdoctoral scholar in cognitive sciences; William A. Alaynick, co-founder of ScholarNexus LLC; and Lauren N. Whitehurst, assistant professor of psychology at the University of Kentucky.