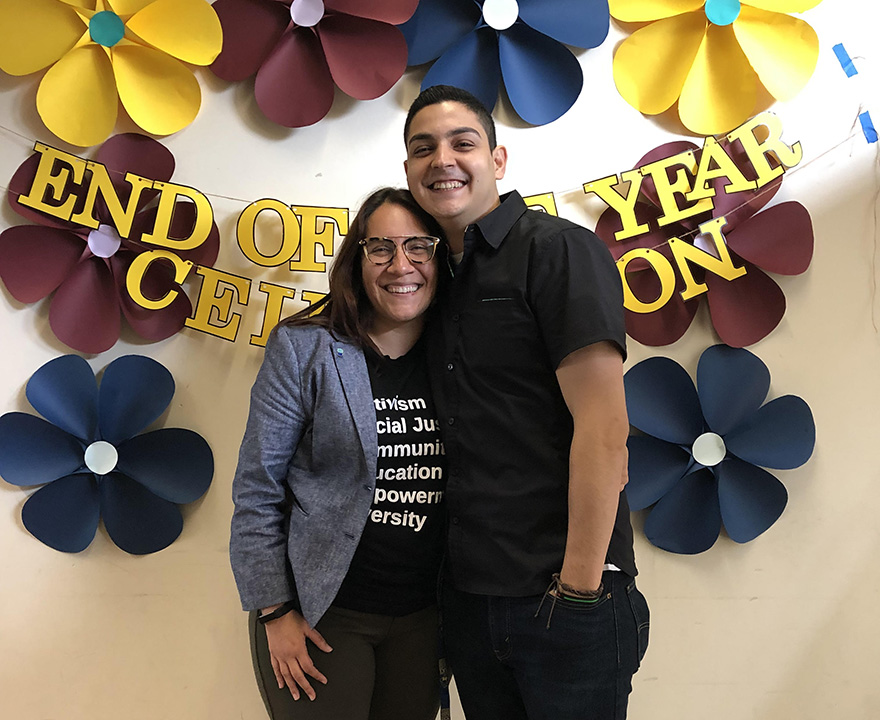 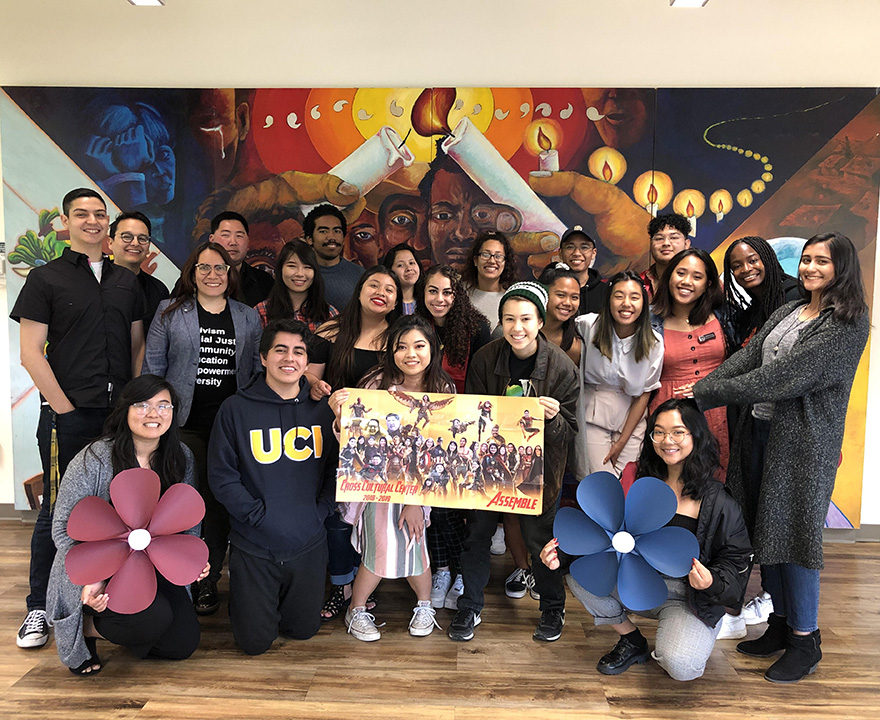 For UCI political science and Chicano/Latino studies major Josue Ruedas, two childhood experiences stand out as shaping his trajectory as an Anteater advocate for change.

When he was in 5th grade, members of his extended family were deported in front of him. He saw what he thought were police officers and wondered if they were looking for a criminal. He would later come to understand that those officers weren’t the police, but from Immigration and Customs Enforcement (ICE), and that they were looking for his aunt, uncles, and cousins.  “It was such a traumatic experience,” he says. “Very quickly, my ethnic identity became central to who I am.”

When Ruedas was in middle school, his school received a bomb threat by someone named “Jose.” Although his name is “Josue,” not “Jose,” police officers handcuffed him.

“I was interrogated for two hours. No one contacted my parents,” he says. “Afterwards, it felt that the school just moved on.”

Ruedas was born in east Los Angeles, but soon after, his parents moved to MexiCali, Mexico where he lived until he was four. His family relocated back to the U.S. when his father changed jobs.

In high school, Ruedas felt that he was aware of things others were not. He noticed that his school, which had a majority of students who were Black and Latinx, seemed to have fewer resources than the neighboring school, which was made up of mostly white students. He witnessed classmates being what he thought was overly disciplined. He heard students being discouraged to take AP exams and suspected it was over fear they might bring down the school’s scores. His efforts to try to discuss race, gender, and class with his teachers were brushed off.

Today, Ruedas is a senior at UCI taking action as an advocate for change. He had always been fascinated by politics, but hadn’t consider pursuing it until he arrived at UCI and realized the field could be a good way to address inequality. He’s found a balance in his two majors.

“Political science is fantastic for addressing institutional systems. Chicano/Latino studies helps remind me of historical inequities and that my experiences aren’t isolated, but are part of a greater phenomenon,” he says.

Not surprisingly, the classes Ruedas has enjoyed the most are the ones that have focused on the intersection of race, gender, law, and politics. He’s found that instead of his questions being rebuffed, like they were in high school, they’re encouraged. Ruedas describes his first critical race theory class with delight.

“Given my past experiences with law and institutional racism, I came to find out that the field I was really interested in, what I’ve been looking for my whole upbringing, is the field of critical race theory. My first politics of protests class with professor Claire Kim in the School of Social Sciences was reaffirming and empowering to an indescribable degree,” he says. 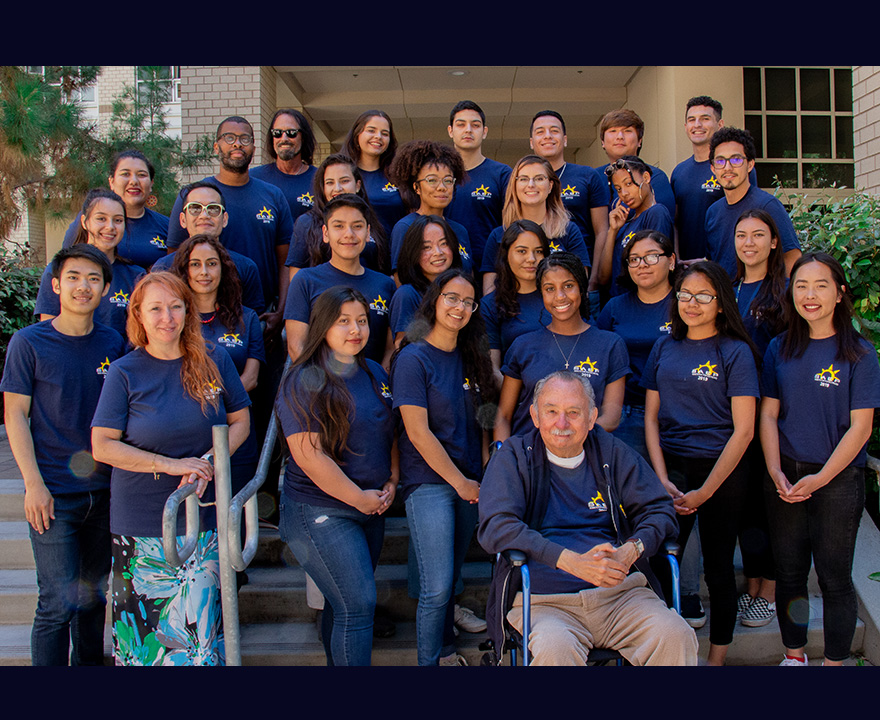 After that class, Ruedas became a member of the Latinx Resource Center Advisory Committee and a discussion leader for the Freshman Edge/ Summer Bridge programs, where he talked about academic success and navigating university life for first-generation students of color. A lot of Ruedas’ motivation for his busy schedule, on and off campus, stems from his calling to help others.

“A lot of first-gen and low-income students are Latinx. How are they being supported and what faces will they see when they first arrive on campus? Are they empowered and encouraged to pursue their interests? I try to make myself as available as possible. I know what that struggle feels like,” he says.

Ruedas was also selected by the Associated Students at UCI (ASUCI) to lobby in Sacramento and Washington, D.C. for the University of California Hill Day and the University of California Student Association, Student Lobbying Conference. He advocated for the expansion of mental health services, for financial aid for undocumented students, and for the extension of the Pell Grant.

“It was a once-in-a-lifetime experience. I won’t forget the people I was with or the institutional introduction to being a changemaker,” he says.

Ruedas’ internship with UCI’s Cross-Cultural Center proved to be another formative experience. One of his duties at "The Cross" was putting together weekly discussion groups for students on topics ranging from the militarization of the U.S. border to healthcare access.

“The Cross encouraged me to be a more active representative of communities of color and to be as outspoken as I am today. It has been central to my professional, personal, and academic development,” he says.

Glenda Flores, associate professor in the Department of Chicano/Latino Studies, got to know Ruedas when he was selected as a student for the UCI School of Social Sciences’ Summer Academic Enrichment Program (SAEP). She was co-director of the program at the time.

“What stands out about Josue is how involved he is on and off campus.  He balances a lot, on top of doing so well in his classes,” she says.

SAEP is an intense, summer program where students receive a fully funded graduate student experience over the summer break. Students receive training in conducting research, public speaking, and how to apply to graduate school.

“One of my best experiences at UCI was participating in SAEP,” says Ruedas.

Ruedas later enrolled in Flores’ “Chicano/Latinos and Labor” class and wrote a personal legacy of agricultural work. “Sometimes, when reading papers, you can just feel the love of what the student is doing. It definitely came across in Josue’s work,” she says.

In addition to finishing up his last year at UCI, Ruedas is a law fellow in the Loyola Legal Education Access Pipeline (L.E.A.P.). The program is meant to introduce students of color to the legal profession.

“The program asks us what kind of attorneys we want to be. It’s been a fantastic experience,” he says.

When he graduates, Ruedas plans to apply to law school. And as he gets ready for his next chapter, he knows education will continue to be a critical component along his path for justice and empowerment.

“I can’t escape my past experiences and I can’t escape who I am. But I can train myself to be an advocate for communities of color.”