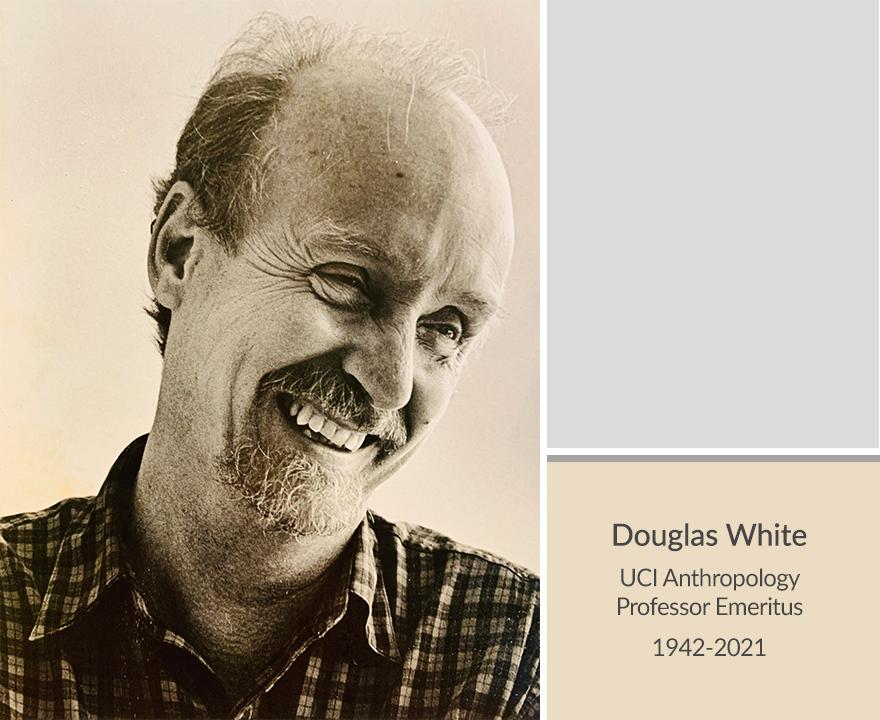 White was recognized widely for his research on social networks, longitudinal cross cultural ethnographic analysis and human-centered complex systems. During his 40-year academic career, he published more than 100 scholarly articles appearing in journals as diverse as Science, American Anthropologist, American Journal of Sociology, Mathématiques et Sciences Humaines, and Complexity to name a few. He authored, co-authored or edited five books, and founded the open access electronic journals World Cultures and Structure and Dynamics. He also developed and contributed to software that is now widely used in comparative studies, community-level network analysis, and the longitudinal analysis of social change. Across his body of work, he contributed extensively to the study of how societies, cultures and social roles evolve dynamically out of multiple networks of social action.

“Doug really systematized the study of classic anthropological topics like kinship and exchange,” says Bill Maurer, anthropology professor and social sciences dean. “He was a dedicated mentor and colleague and a warm and generous friend.”

White’s work on network dynamics and social groups was funded by organizations such as the National Science Foundation, Santa Fe Institute, and Mellon Program. He earned recognition for outstanding scholarship from the American Journal of Sociology and American Sociological Review. In 1989, he was named a recipient of the Alexander von Humboldt Distinguished U.S. Senior Social Scientist Research Award, an honor recognizing White’s lifetime academic achievements.

“Douglas White made major contributions to cross cultural analysis of the sexual division of labor and marriage and kinship, among many other topics. He was also known for innovative work in network analysis and mathematical modeling of social, economic, and historical dynamics,” says Leo Chavez, anthropology Distinguished Professor and department chair. “He also played an active leadership role in the department and in the School of Social Sciences more broadly. I will remember him fondly for his friendship and advice as one of core members of the anthropology department when I arrived in 1987.”

“Doug was my colleague in the Program in Comparative Culture in the 1970s and we both moved to the group in social relations in 1978 and then into the new anthropology department in 1988,” says Karen Leonard, anthropology professor emerita. “Doug was a strong supporter in my fight for tenure; academia can be a battlefield, but Doug was a principled person as well as an excellent scholar. He was a valued colleague and friend.”

Throughout his career, White had a wide-ranging set of international collaborations and served more than a dozen visiting professor posts in top tier institutions in countries including the U.S., France, Germany, Hungary, Slovenia and China. Although his roots were firmly tied to mathematical anthropology, in his latter years he was particularly passionate about cross-disciplinary research investigations tied to network dynamics and complex systems affiliated with such institutions as the UCI Institute for Mathematical Behavioral Sciences where he chaired the cross campus Social Dynamics and Complexity Research group and the Santa Fe Institute where he was on the external faculty.

“The death of Douglas White makes the discipline of anthropology much poorer,” says Dwight Read, UCLA anthropology Distinguished Professor emeritus and longtime colleague of White’s. “Doug’s long legacy of important contributions to anthropology developed through rigorous model building and the application of innovative analytical methods, especially in the area of network analysis, will, itself, be a memorial to him and his work.”

White is survived by his longtime partner and research collaborator, Lilyan; his son, Scott (Katherine); and grandchildren Hayden and Claire.