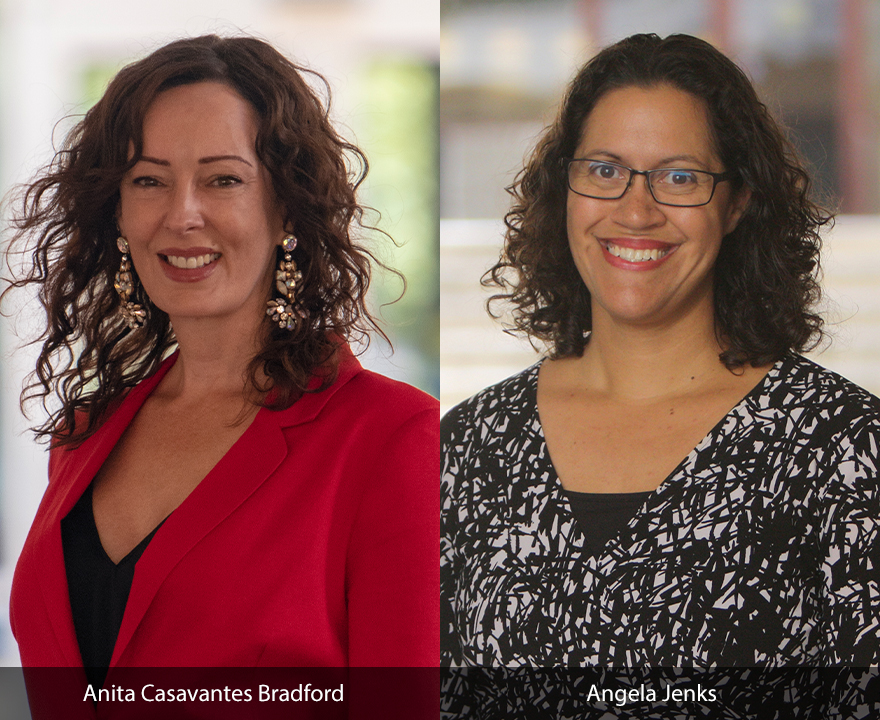 Casavantes Bradford is an internationally recognized scholar of Cuban and Cuban American history, immigration and critical refugee studies, and childhood. She's the author of the books The Revolution is for the Children: The Politics of Childhood in Havana and Miami, 1959-1962 and Suffer the Little Children: Child Migration and the Geopolitics of Compassion in the United States, numerous scholarly articles and reviews, and public scholarship on the experiences of undocumented and first-generation students in higher education. A former first-generation college student, high school teacher and freelance journalist, she completed her Ph.D. in U.S. and Latino/Latin American history at UC San Diego in 2011 and spent two years as a UC Presidents' Postdoctoral Fellow before being hired in 2013 as a faculty member at UCI. In 2014, she partnered with the Division of Undergraduate Education to launch UCI's First-Generation Faculty Initiative, which quickly became a systemwide initiative involving more than 1,000 first-gen faculty members as mentors and advocates for first-generation UC students. She also founded and continues to serve as faculty in residence of the School of Social Sciences First-Generation First Quarter Challenge, a free co-curricular program that seeks to promote diverse first-generation student academic success and wellbeing.

Deeply proud of her immigrant and bicultural Latina identity, she is well-known across campus as an advocate for immigrant students, including undocumented students and those from mixed status families. She served as the advisor for the former student organization Dreams @ UCI from 2013-15, as founding chair of UCI's Committee on Equity and Inclusion for AB540/Undocumented Students from 2016-17, and as a member of the 2018 Academic Senate Ad Hoc workgroup on Undocumented Students. As a military daughter and spouse, she also actively advocates for UCI's veteran students, serving as invited faculty in the Warrior Scholars Program and as director of the School of Social Sciences' new Veterans Studies certificate program, for which she also created the curriculum. In recognition of her outstanding work to promote inclusive excellence at UCI, she received the 2019 UCI Academic Senate Faculty Award for Mentorship; the 2019 UCI Latino Excellence and Achievement (LEAD) Award for Outstanding Faculty; the 2017 Graduate Division's Tom Angell Faculty Award for Outstanding Mentorship; the 2016 Social Sciences Dean's Award for Outstanding Mentorship; and the 2015 UCI Dynamic Womxn Outstanding Social Justice Activist Award.

Working alongside her will be Angela Jenks, a medical anthropologist who joined the UCI faculty in 2013. Jenks attended the University of Pennsylvania as a Mellon Mays Undergraduate Fellowship Program scholar which exposed her early on to the idea of earning an advanced degree. Jenks applied and was accepted to the unique medical anthropology doctoral program offered jointly by UC Berkeley and UCSF. Backed by the National Science Foundation Graduate Research Fellowship Program and the UC Chancellor's Graduate Opportunity Fellowship, which is awarded to outstanding applicants who also advance the Regent’s goals of diversification of the academy, she completed her Ph.D. in 2009. Her first job out of graduate school was as a tenure-track instructor with Los Angeles Southwest College where she pursued her passion in teaching and mentorship. She spent four years at the community college, working closely with diverse students, including many minority and first-generation students. She was then hired on as a faculty member at UCI where she's continued her concerted work mentoring first-generation and minority students.

Jenks pursues research at the intersection of anthropology and medicine, focusing on efforts to improve the cultural competence of U.S. health care. Her work has taken her to medical schools, managed care organizations and hospitals where she’s explored the understandings of culture and race that are incorporated into efforts to address health disparities. In the classroom, Jenks teaches roughly seven courses a year which primarily fill the medical anthropology minor, including Medical Anthropology; Anthropology of the Body; Cultures of Biomedicine; Disease, Health and Inequality; and Race, Gender and Science. She's taught graduate courses in medical anthropology and one on pedagogy for future professors, and she's taught courses for the UCI School of Medicine's Program in Medical Education for the Latino Community (PRIME-LC). She also helped revamp the anthropology department's honors program from a series of independent studies courses into seminars that allow students to meet and work together as a cohort under a faculty advisor. She served for four years as the coordinator of anthropology's master's program in Medicine, Science, and Technology Studies and she taught the graduate program's proseminar. She also served on the department's Undergraduate Committee, which came under her directorship in 2018. Jenks also contributes to the broader field of anthropology via service work. In 2016, she was the scholar in residence for Cultural Anthropology, one of the field's main academic journals. The journal's rich online environment gave her a platform from which to publish nine teaching tool blog posts focused on everything from backwards course design, to pieces on why students don’t read and how new teachers can develop a standout statement of teaching philosophy. She launched the online open access Teaching and Learning Anthropology journal - for which she serves as editor in chief - to share articles, films, digital materials, syllabi and more with teachers who can also then exchange important ideas, reflections and support. Her work earned her recognition with the 2017 Teaching Assistant Instructional Development Award; as the 2017 Dean’s Honoree for Excellence in Undergraduate Instruction in the School of Social Sciences; the 2018 Provost's Teaching Fellowship; and the 2019 Academic Senate Early-Career Faculty Award for Teaching.

In their new roles as associate and vice associate dean of faculty development and diversity, Casavantes Bradford and Jenks look forward to building on the foundational work of former associate deans Belinda Robnett and Barbara Sarnecka, and former vice associate dean Mimi Liljeholm, with a focus on developing new programs and policies to support the recruitment and career advancement of underrepresented faculty and graduate students, while championing efforts by faculty of all backgrounds to further equity and inclusion through research, teaching and service.