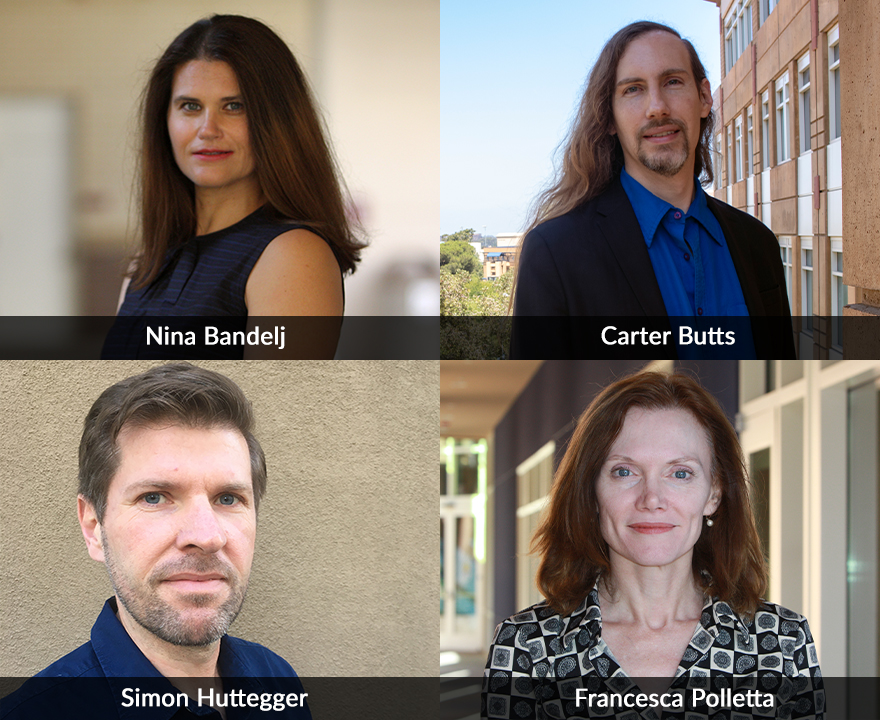 Bandelj, who also serves as UCI’s associate vice provost for faculty development, is noted for her research on the social bases of economic processes through which she dispels the assumption that the economy runs solely on the supply and demand rationale. She’s the author or editor of six books and she’s the current editor of the Socio-Economic Review and associate editor of the American Journal of Cultural Sociology. An elected member of the highly selective Sociological Research Association, Bandelj is also vice president-elect of the American Sociological Association and treasurer of the Society for the Advancement of Socio-Economics. She earned her Ph.D. at Princeton University and joined the UCI faculty in 2003.

Butts is a mathematical sociologist who specializes in the study of social networks. He’s applied complex system models to shed light on everything from how proteins form new structures - leading to insight about Alzheimer’s disease and diabetes – to the role Twitter plays in emergency management and communication during times of crises. His work has been funded by multimillion dollar grants from the National Science Foundation, National Institutes of Health, Department of Defense and National Oceanic and Atmospheric Administration. He joined the UCI faculty in 2002 after completing his Ph.D. at Carnegie Mellon University. He’s an affiliated researcher at CALIT2 and he holds courtesy appointments in UCI’s statistics and electrical engineering and computer science (EECS) departments.

Polletta's research focuses on the cultural dimensions of protest and politics. She's the author or editor of four books, including the multi-award winning It Was Like a Fever: Storytelling in Protest and Politics and her most recent book, Inventing the Ties that Bind: Imagined Relationships in Moral and Political Life in which she explains how we can find our way back from political polarization without having to become friends first. Polletta earned her Ph.D. at Yale University and spent a decade as a faculty member at Columbia University before joining UCI in 2005.

Huttegger is the chair of UCI's top-ranked Department of Logic & Philosophy of Science. His work, funded by the National Science Foundation, spans game theory, the philosophy of measurement and methodology, and probability, with significant contributions to allied fields, including the philosophy of biology. He's the co-editor of The Review of Symbolic Logic and the author of the book, The Probabilistic Foundations of Rational Learning. He earned his Ph.D. at the University of Salzburg and spent two years as a postdoc at the Konrad Lorenz Institute for Evolution and Cognition Research near Vienna before joining the UCI faculty in 2008.