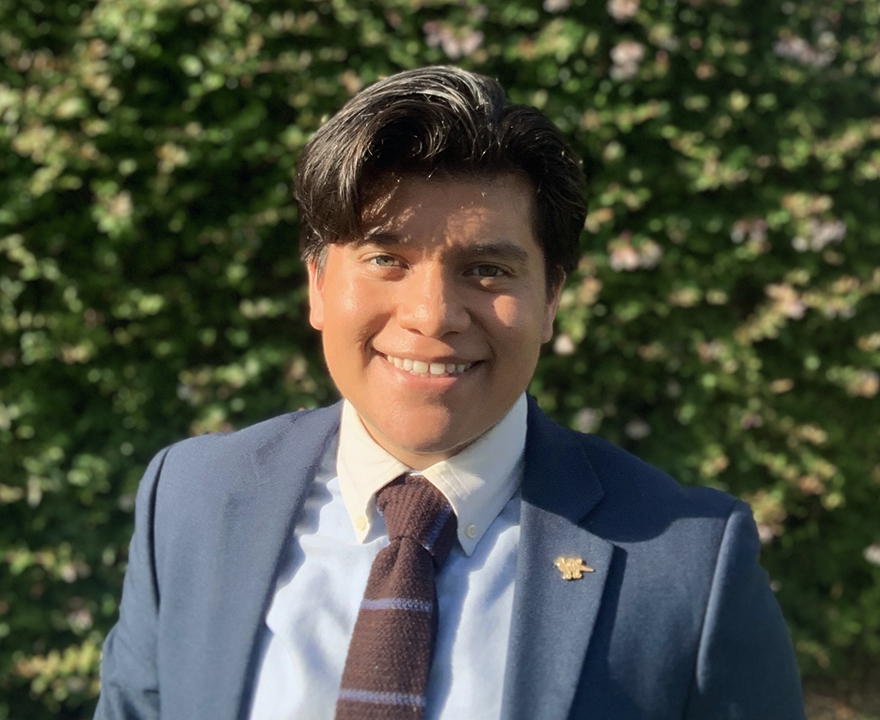 Why did you decide to come to UCI, and what fueled your interest in political science?

I wanted the feel of a large university which would provide the best challenges and opportunities for my academic and professional development.

I’ve always been involved in politics. My early involvement in civic engagement and student government was fortuitous. I consider myself lucky to have discovered my passion at a young age. I also plan on attending law school and political science naturally lends itself towards that goal.

Besides this scholarship, I think my recent nomination for membership in Phi Beta Kappa stands out as my biggest accomplishment thus far at UCI. It certainly validates the hard work that I not only put into my classes, but also into my extracurricular activities.

Have you received any other major grants, awards or scholarships while in pursuit of your degree?

Yes, I received the Adib Family Scholarship to help pay for the travel cost associated with the Olive Tree Initiative’s summer program. I also received a scholarship to supplement my UROP project. Additionally, I have been recognized and commended by the UCI Ethics Center and the Office of 5th District Supervisor Lisa Bartlett.

What activities have you been involved with on and off campus?

I’ve been involved with UCI’s Mock Trial team, the Olive Tree Initiative, the Deconstructing Diversity Initiative, Congresswoman Katie Porter’s Youth Advisory Board, and the OC Board of Supervisors. As a member of St. Timothy’s Catholic Church, I try to assist their charitable efforts when available; furthermore, at UCI I have helped out at events organized by the service club “By Any Means.”

Tell us about your research work as an undergrad.

I just completed a 30-page paper as part of my UROP project. The article examines the intersection between racial identity and national identity in the United States. It does this by analyzing the political thought of James Baldwin and Elijah Muhammad.

My mother and father have been wonderful role models in my moral, intellectual, and personal development. They have taught me the importance of humility and kindness above all other things. My sister is a beacon of patience and compassion, I am indebted to her example. My 7th and 8th grade history teacher, Johanna Heavlin-Martinez also played an important role in affirming my path and encouraging me to continue on toward political science and law. I’d like to thank all of my friends for their support in addition to the amazing faculty who have contributed so much to my education. Specifically, professors Topper, Greenberg, Chambers, Petrovic, Monroe, and McThomas.

What challenges have you had to overcome, and what do you feel has served you well in the work?

I had a few speech impediments growing up, though I was able to progress beyond them and developed a love for public speaking. Eventually, I became the club president of my high school debate team and the Captain of the Speech Team. Finding my own voice (and being proud of it) was certainly a major milestone. Concerning academics and leadership, I think getting selected by the American Legion to participate in the California Boys’ State leadership program was one of the highs of high school. Of course, graduating as a valedictorian and getting accepted to UCI was life-changing. I’m especially thankful to have had the opportunity to study abroad in Israel-Palestine with the Olive Tree Initiative.

I was initially rejected by UC Irvine; in fact, I was rejected by every UC school I applied at. During this time, I was incredibly distraught and questioned my own intelligence, my self-worth, especially since I had worked so hard in high school. Luckily, my tenacity told me to press ahead. I wrote an appeal letter to UC Irvine which was granted—I heard this news only two days before graduation. This experience taught me the importance of persistence and of believing in your own potential.

While tenacity is certainly a personal virtue of mine, it can sometimes deteriorate into stubbornness. In that sense, I think the greatest challenge to my own success has always been myself. That is, I hold a certain vision of what the (idealized) future looks like, I create plans and strategies to get there and stick to the chart I’ve laid out. Of course (as this past year as shown), even the best laid plans are subject to disruption. Learning to balance my tenacity with flexibility and a healthy dose of curiosity (and skepticism) has been helpful in this regard.

I’m fond of Aldrich Park; however, before COVID, I could typically be found studying on the upper patio of Langson Library or at Brandywine.

Myself, my roommate and his friends raced on a tandem bike around Ring Road in the middle of the night.

When do you plan to finish your degree and what will you pursue after?

I will graduate in 2022. Afterwards, I plan to get a master’s degree (ideally with a focus in political philosophy), travel, and attend law school. After my (formal) education is completed, I hope to work for the federal government—focusing on the diplomatic or public-policy sector.