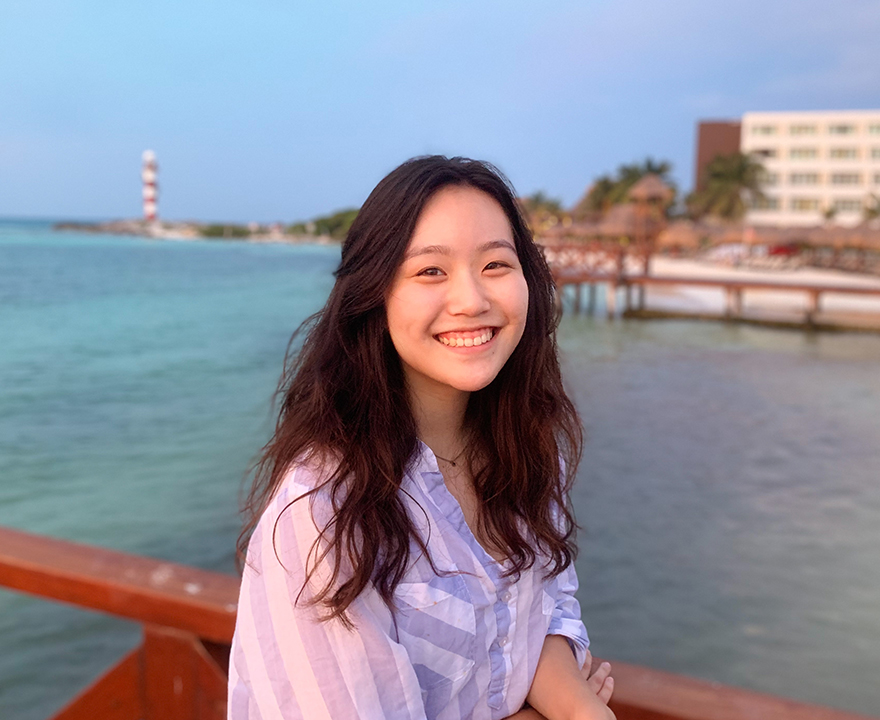 Why did you decide to come to UCI and pursue majors in social policy and public service and education science?

I decided to come to UCI because one of my high school teachers mentioned how everyone at UCI is always smiling and that he thought I would be a good fit here. Also, the proximity to LA, the beach, Disneyland and SD were very helpful too.

My AP government class required us to watch the “West Wing” as summer homework and it made me interested in government. I’m also interested in education because of how education policies affect me as a student and the relevancy of education to my life now.

I plan to finish my degree in June 2022. Afterwards, I hope to conduct research with Fulbright or as part of the Carnegie Junior Fellows Program. I plan to attend law school and eventually run for office. Ultimately, I hope to be elected President of the United States.

My biggest accomplishment at UCI has been mentoring a few first-year students and then going on to see them join other programs, mentor other students, and step into leadership roles on campus.

Have you received any major grants, awards, scholarships while in pursuit of your degree?

I’ve been on the Dean’s honor list for each quarter since I’ve been at UCI. This year (2020-21) I was given an award from UROP for $650 for my research on first generation Taiwanese American identity formation.

What activities have you been involved with as an undergrad?

Previously I’ve been involved as a staffer for the Student Parent Orientation Program, an intern for the Student Programming Funding Board in ASUCI, a student athlete tutor in Calculus and Writing, and a mentor for CONNECT@UCI, and an assistant event coordinator for UCI Guest and Events Services. Off campus, I’ve interned with Assemblywoman Cottie Petrie-Norris and with the Orange County Asian Pacific Islander Community Alliance. Currently I’m a Sierra Programmer for Sierra Hall in Mesa Court, a member in the Dean’s Ambassador Council, and an undergraduate research assistant for professor Hardt. I’m also interning with the Center for Racial Justice in Education.

Tell us a bit about your research.

My UROP independent research is on first generation Taiwanese American identity formation. I’m studying the components that contribute to the formation and development of Taiwanese identity to understand what it means to identify with a homeland that has consistently been in a struggle for independence from colonization and acknowledgement as an autonomous country. Such understanding is critical because identity influences self-esteem and predicts behavior.

I am currently conducting a field study on Black-focused curriculum and how the lack of it shapes student perceptions regarding the Black community. I utilize Critical Race Theory to examine student experiences learning about Black history in K-12 to better understand the impact of an incomplete curriculum on student racial attitudes.

I’m also a research assistant for professor Hardt’s project with professor Smith (Iowa State University) and Shauna Gillooly (UCI). They are studying the impact of female academic role models on female Ph.D. students. Additionally, I’m a part of a team of undergraduate research assistants to support professor van Es and Stephen Skoropad (UCI) in their study on teacher preparation programs and advancing racial and social justice.

Richard Steffen. He’s a retired math teacher from my high school that volunteered to tutor students afterschool in the Students for Success program. I started out going to the tutoring program to get help, but eventually I went for the company. He not only helped me understand math but also read through at least 10 versions of my college application essays. We solved a lot of crossword puzzles together, ate a lot of snacks in the library, and told a lot of jokes. He is basically my second grandfather.

What unique life circumstances have had an impact on who you are today?

A year and a half ago I was in a car crash. It made me rethink how I want to approach life and what is important to me. I used to feel this sense of urgency and have this belief that I need this job to be successful. While I still feel pressure to follow certain paths, I now try to be more appreciative of what I do have and trust in the process because I know everything will be okay in the end.

Being an exchange student to Japan and volunteering in Taiwan.

In the mini outside courtyard next to the Blood donation center. It’s super calming there and also a really good place to do work.