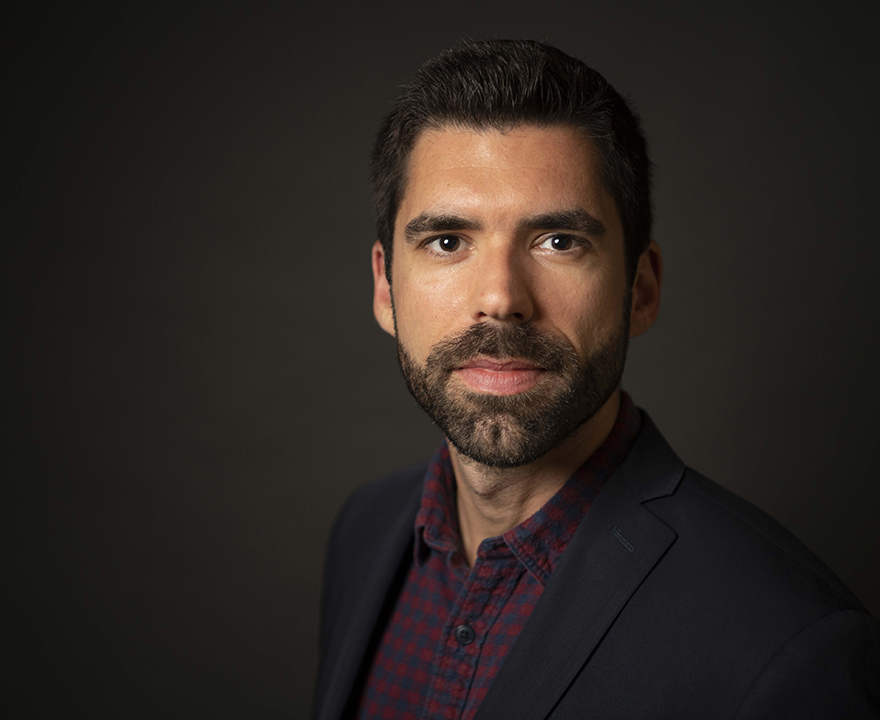 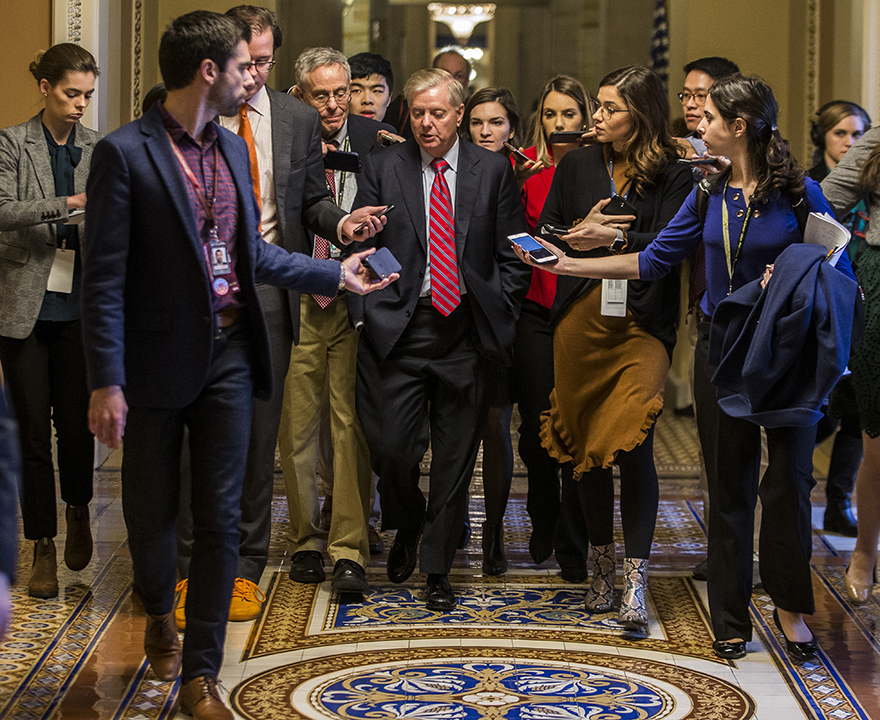 Igor Bobic ’10 arrived at work on Capitol Hill January 6, prepared for a long but perfunctory day at work, reporting on Congress certifying the presidential election. Within hours, he found himself at the epicenter of an historic insurrection -- which he caught on tape.

You may not recognize Bobic’s name, but you almost certainly have seen the footage he captured on his cell phone just outside the Senate chamber that day. The 85 seconds of intense interaction between a lone Black police officer and a crowd of angry trespassers has been viewed well over 10 million times and included in scores of news reports.

The officer in the video, Eugene Goodman, has been hailed as a hero, but some, too, have called Bobic’s coverage that day heroic. Appreciative strangers now send him gift cards and encouraging messages.

Seated on the third floor of the Capitol in the Senate press gallery that day, Bobic was covering the Senate proceedings for Huffington Post when he heard shouting downstairs. Bobic and his colleagues had no idea that protesters had entered the building, so he grabbed his phone and ran downstairs while recording.

“Oh ----, this is bad. I should not be here,” he remembers thinking to himself at the sight of the angry crowd in front of Goodman. “But instinct kicked in and I just kept recording.”

It was several days before Bobic learned that the doors to the Senate chamber, with senators and the vice president inside, were sealed at almost exactly the same time that the protesters made their way up the stairs. Locked out of the press gallery, Bobic tried to look unassuming — even in his suit and press badge — while the crowd around him started shouting “Where are they?!” looking for lawmakers.

Later, Bobic followed a group into the Senate’s public galleries, where he photographed rioters repelling down the walls into the chamber itself and, ultimately, posing in the vice president’s chair.

“They were jubilant, they were cheering,” says Bobic. “They had never been inside the Senate chamber before.” 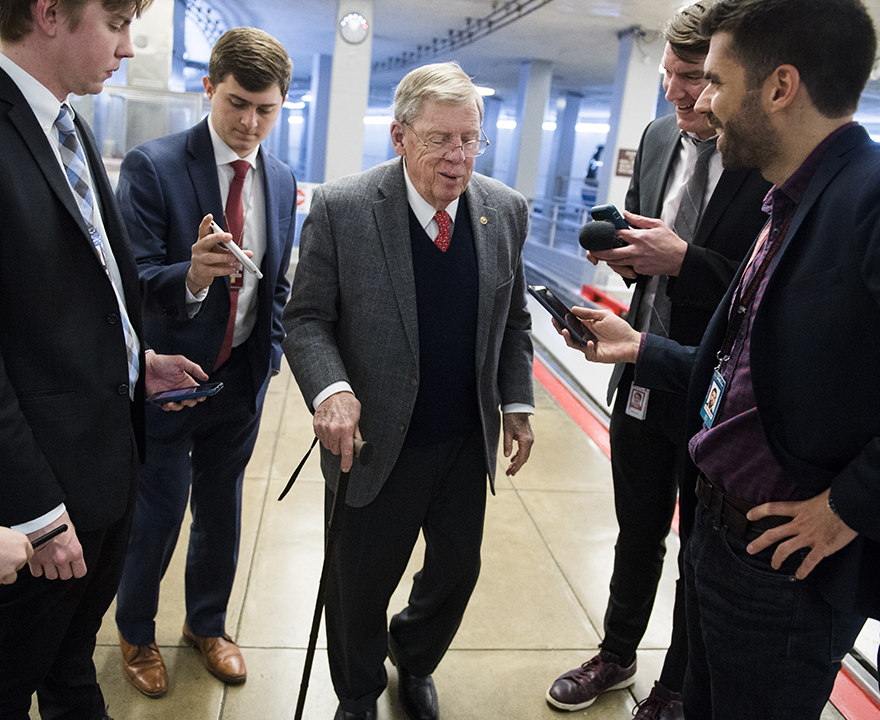 Eventually, Bobic found a place to hide with a couple of other reporters until the police arrived to secure the building and evacuate them. Even days later, he’s still processing everything he witnessed, and how it might have ended differently.

“That cop was such a hero, and in the moment, I didn’t know what he was doing, but it looks like he was leading the mob away from the most immediate Senate door,” says Bobic. “I’m still trying to find him and thank him for what he did for everybody, and especially for me.”

Bobic’s family, both in the U.S. as well as Bosnia and Herzegovina and Croatia, watched the news unfold as well. Several reached out to wish him well and gently remind him that he’s been through much worse.

“A lot of people I know from growing up are either dead or still living in Bosnia and Croatia,” says Bobic. “Meanwhile every day, I’m fortunate to be here in the halls of Congress.”

Growing up in the former Yugoslavia, Bobic’s early childhood was punctuated by violence of the Bosnian War.

“One of my most vivid memories as a kid is when all of a sudden you’d hear sirens and you’d have to run to a bomb shelter in the basement, go through an hour of shelling,” he recalls. “And then you’d go back outside and play with your friends.”

His parents’ inter-ethnic marriage — his father is Serbian Christian and his mother is Muslim — made the family a target amid the political turmoil, so they fled their home in the middle of the night, sleeping in soccer stadiums and ice rinks until they were taken in by a Serbian Christian family. When he was 7 years old, Bobic and his parents were accepted into the U.S. as refugees, and settled in San Diego with the help of the U.S. Catholic Services.

Bobic says he was drawn to history and government classes in school, largely because of his first-hand childhood experiences with the consequences of geopolitics and war. After finishing high school in San Diego, Bobic chose UCI for college, and he explored other academic fields, before ultimately making his way to the political science department.

Matthew Beckmann, associate professor of political science with expertise in American presidential politics, remembers mentoring Bobic for his senior thesis on the “supply” of and “demand” for presidents' political capital.

“Igor is a quintessential Anteater. He is smart and hardworking, thoughtful and fun,” says Beckmann. “There are many reasons I am proud to be a professor at UCI. Igor is one of them.”

With a recommendation from Beckmann, Bobic was accepted into the UCDC program and spent a quarter in 2009 interning at the Department of Transportation’s legislative affairs office.

After graduating from UCI, Bobic worked at a law firm and seriously considered law school, but he applied for a job at his favorite political blog, Talking Points Memo, in what he describes as a last-ditch effort to get back to D.C. He got the job. His first day working on the Hill in 2011 was the day after President Barack Obama announced that U.S. forces had killed Osama bin Laden, and Bobic got to attend a press conference held by congressional leaders.

In the following years, Bobic got to know the cast of characters who work in Congress, learning tricks like waiting in hallways outside of bathrooms to get comments from legislators as he mastered the job of political journalist through “trial by fire.” In 2014, he was hired by Huffington Post as a political reporter.

Bobic remains connected with UCI and stays in touch with Beckmann. He has even hosted UCDC students in the Huffington Post offices to talk politics and life in D.C. It was through Twitter that Beckmann realized his former student was reporting from within the Capitol as rioters made their way inside on January 6.

“The insurrection at the Capitol was a dark day for American democracy. But in that darkness shined glimmers of hope,” says Beckmann. “Igor captured a Capitol Police officer doing heroic work at a historic moment, and then told that story in a way that inspired as much as it informed. What I appreciated was how Igor, in that perilous moment, focused his camera on the officer rather than himself, and told the officer's story rather than his own.”

Barely a month into 2021, Bobic has covered the second impeachment of President Donald Trump and the insurrection. He was recently promoted to senior politics reporter for Huffington Post, and has no plans to move on from covering Congress anytime soon.

“I got absolutely hooked,” Bobic says. “It’s thrilling right now to be in the business, and I get to be in the front row of history.”