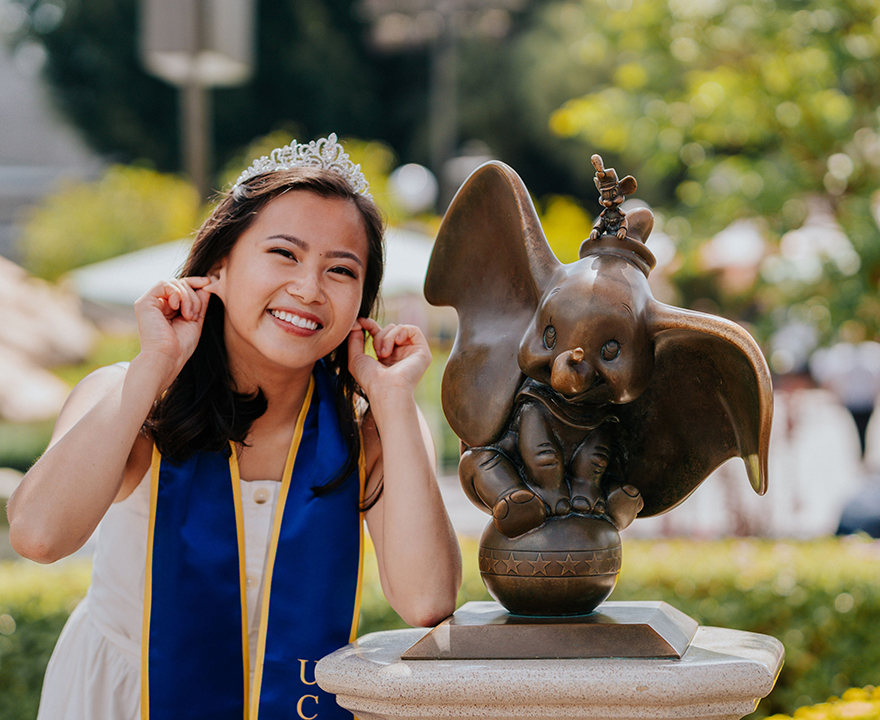 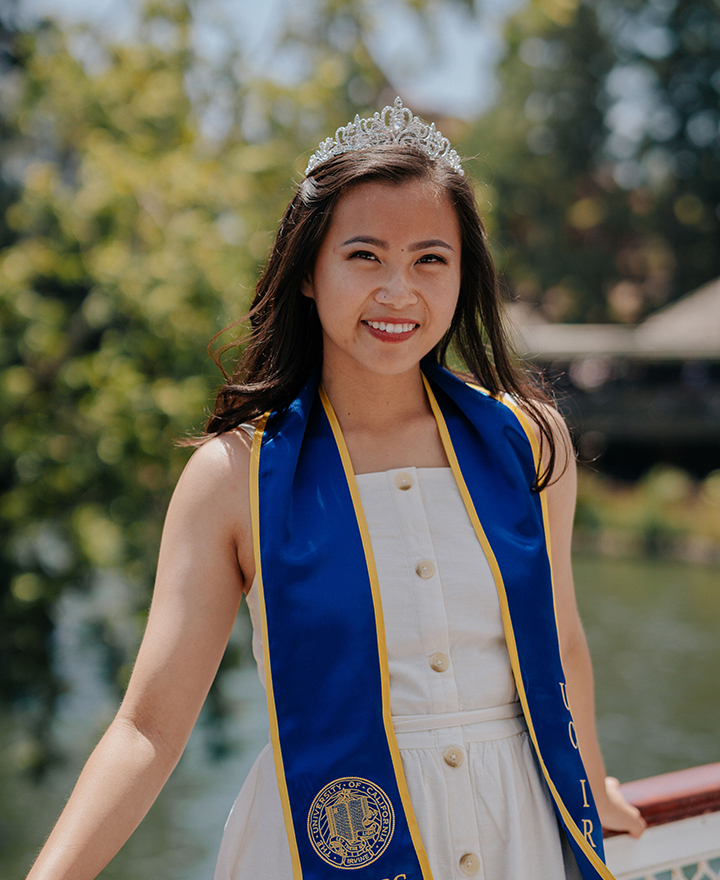 Senior Joyce Nguy exudes enthusiasm for her soon-to-be alma mater. In her time on campus, she has served as a Campus Representative, student blogger, Residential Adviser, Global Connect student leader and self-proclaimed zot zealot, to name a few. And there’s also that Fulbright she won to teach English in Taiwan. Majoring in political science and education sciences, Nguy is a persistent and tenacious explorer of opportunities, and it has paid off in spades.

San Diego roots
Nguy is the middle child of three daughters born to her father, a Vietnam war refugee, and her Chinese immigrant mother. Her parents came to the United States, settled in San Diego, and shared the same dream as many immigrants: to provide opportunity for their children.

Nguy grew up in a culturally diverse area, with Vietnamese, Mandarin and Cantonese spoken in the home. Because of this, Nguy had a strong sense of her family’s roots. She also had a deep understanding of the sacrifices made by her parents to provide a bright future for her and her sisters. Though not college graduates themselves, Nguy says that her parents made it clear to their daughters that they would attend college: “There was never a discussion of whether or not we would go to college - it was we were going to college.”

When considering her college options, Nguy knew she wanted to be close enough to home to visit her family on weekends, but far enough away to feel as though she was independent. She applied to five UCs as well as one state school. Nguy did campus visits at her top two choices: UCSB and UCI, and it was her campus visit to the Irvine campus that sealed the deal. The location was ideal in terms of proximity to family - as well as the beach.

It helped that Nguy’s older sister was already attending UCI, and she knew that having family close by would be like having a “home away from home.” Nguy became an Anteater in the fall of 2015.

As a first year, her desire to get involved in campus activities led her to join Global Connect. UCI Global Connect leaders teach in secondary OC classrooms where they team-teach relevant and recent global affairs curriculum, including topics such as economics, human rights, and fragile states.

This experience helped solidify Nguy’s passion for teaching, and she also found that teaching material to younger students helped her gain a deeper knowledge of the subject matter.

“All the things I got to learn in class, I got to apply to my students later on, said Nguy.  “It helped me grow as a student.”

Jessica Bit, former Global Connect Director, recalls the unique leadership characteristics that make Nguy so inspirational to her students: “She’s a fearless and tireless leader, caring and nurturing mentor, enthusiastic and passionate teacher, and a bright and ambitious scholar,” Bit says. “She always encourages the students to reach their highest potential and develops them into the next generation of leaders.”

Moreover, Bit recognizes the passion that drives Nguy, both in the classroom and in her life.

“She never grows tired of doing what is right, fighting for what is just, and pursuing knowledge to uplift those around her, especially those in marginalized communities.”

For this past school year, Nguy has served as the undergrad executive of the program, which entails leading the interns, coordinating site supervisors and reviewing curriculum. When asked about the program, Nguy’s passion for it is clear.

“I’ve enjoyed every second of it. it Global Connect was really a foundation for everything for me, and I’m so grateful for it,” she says.

When she started as an Anteater, Nguy had plans to become a high school teacher. Deeply interested in education and politics, she envisioned helping high school students gain a broader understanding of the political, cultural and racial issues facing the world today.

When she was a second year, Nguy enrolled in “The Philosophy of the Other,” taught by political science associate professor Daniel Brunstetter. The course was an eye-opener for Nguy, and changed her perspective as a student. The final for the course was fairly open-ended: do what you want with the course material to demonstrate your knowledge of the information. Nguy compiled highlights from the course material and developed a lecture, which she then presented to a group of ninth graders through the Global Connect program.

After reviewing her final, Brunstetter asked to meet with Nguy. In that meeting, he asked about her future aspirations, to which Nguy replied that she’d like to teach high school. Brunstetter suggested she consider pursuing a Ph.D. to teach at the university level.

“That really shook me” says Nguy. “I’ve really not had that - someone having that belief in me. That was one of the most impactful moments at UCI for me."

When asked about Nguy, Brunstetter is equally enthusiastic. “I recall distinctly her final project, and her sparkling enthusiasm and intelligent presence in the classroom.” Brunstetter felt a calling to help her discover her own potential as an educator.

“One of the exciting things about being a professor is that first encounter with students in class. There is so much unknown potential in the room, waiting to be unlocked,” he says. “When I think of Joyce, I recall that exciting potential. When I learned that she was working with high school students, I felt a sense of pride that she was carrying on the tradition of teaching as a career path. Joyce has such enthusiasm and passion, and her intelligence is contagious."

Wanting to enmesh herself in cultural studies in a different part of the U.S., Nguy applied for and was accepted to the UCDC program for the summer of 2017, which allowed her to live and work in DC along with other UCI students.

Nguy served as an intern at OCA (Asian Pacific American Advocates), a non-profit whose mission is to advocate for Asian American and Pacific Islanders.

Growing up in San Diego, Nguy was surrounded by a population with a heavy concentration of Asian Americans, which perhaps sheltered her in a way of which she wasn’t previously aware.

“When you live in a bubble, that makes people complacent. When you’re with a bunch of other people who are all like you, you never feel like you have to advocate for yourself,” she says. Her summer with OCA helped broaden her perspective and shape her future plans.

When she returned to campus that fall, Nguy sought opportunities in race curriculum and research. With that, she enrolled in an American metropolitan politics course taught by political science research professor James Danziger. His encouragement and mentorship inspired her to learn more about doing research and how to pursue further education.

“Joyce is a wonderful blend of intelligence and an adventurous spirit that has motivated her to learn in and experience many different domains, ranging from the UCI classrooms to twice interning in Washington, D.C.,” he says. Of her personality, Danziger says, “Joyce has a truly irrepressible joy of life and learning that enriches every activity in which she participates.”

Inspired by what she had learned on campus, Nguy spent the summer between second and third years serving as a Hilliard P. Jenkins Fellow at Frontline Solutions, a Washington, D.C.-based consulting firm that focuses on social justice.

Upon her return to UCI in the fall of 2018, Nguy enrolled in African American Politics, a course led by political science assistant professor Davin Phoenix. This course helped everything come together for her: she knew then that her passion was to study race, identity, gender, politics and culture.

Phoenix fondly recalls Nguy as an energetic and enthusiastic student.

“Two things in particular have stood out to me as I’ve taught Joyce and advised her on a research project. One, she has an infectious and charismatic energy. She’s carried that energy to every class session and one-on-one meeting, and this has the effect of lifting the spirits of those around her, including myself,” he says. “Two, Joyce displays a real emotional authenticity. She possesses a keen sense of self-awareness, and she’s displayed a willingness to be open about her challenges as she’s navigated the many pitfalls of the research process.”

After her academic path became more clear, Nguy started to think more about what life after graduation might hold. Nguy visited the Scholarship Opportunities Program (SOP) and learned about the post-graduate scholarship opportunities that were available. With her teaching background, and interest in the study of race and culture, it became clear that the Fulbright English Teaching Assistantship (ETA) in Taiwan was an excellent fit. Fulbright ETAs are placed in classrooms abroad to assist English teachers with their curriculum, as well as serving as a cultural ambassador.

Though she was a strong candidate, getting the scholarship was anything but assured. Competition for Fulbright scholarships is intense, and requires a rigorous application process. This process included a statement grant purpose, faculty recommendations, a language evaluation, and, most importantly, a campus endorsement. The campus endorsement itself is rigorous, and involved gathering her faculty advisers, SOP staff, and host teachers from Global Connect together to interview Nguy. She was grilled on her teaching abilities, knowledge on Taiwan, ability to serve as a cultural ambassador and more. Ultimately, she was awarded a campus endorsement.

Nguy received notification that she was a finalist on March 11. Of twelve applicants from UCI, Nguy is one of two who were awarded a scholarship. Nguy will be in Chang Hua, assisting in teaching English, modeling the language, and developing lesson plans as well as serving as a cultural ambassador.

Nguy sees this experience as an excellent bridge between undergraduate and graduate school, providing a global perspective for her to apply to her future teaching career.

Throughout her four years as an Anteater, Nguy has sought and welcomed opportunities that have pushed her out of her comfort zone, challenged her perspective and helped her grow. She is grateful for the experiences provided her during her time at UCI, and how UCI has helped shape her path.

Nguy recognizes that it isn’t always the things you seek that ultimately bear fruit, and the paths you didn’t know existed can be the most rewarding.

“I really think that the best things in life are the things you don’t look for.”

-Kara Roberts for the UCI School of Social Sciences