From Atwater to All'estero 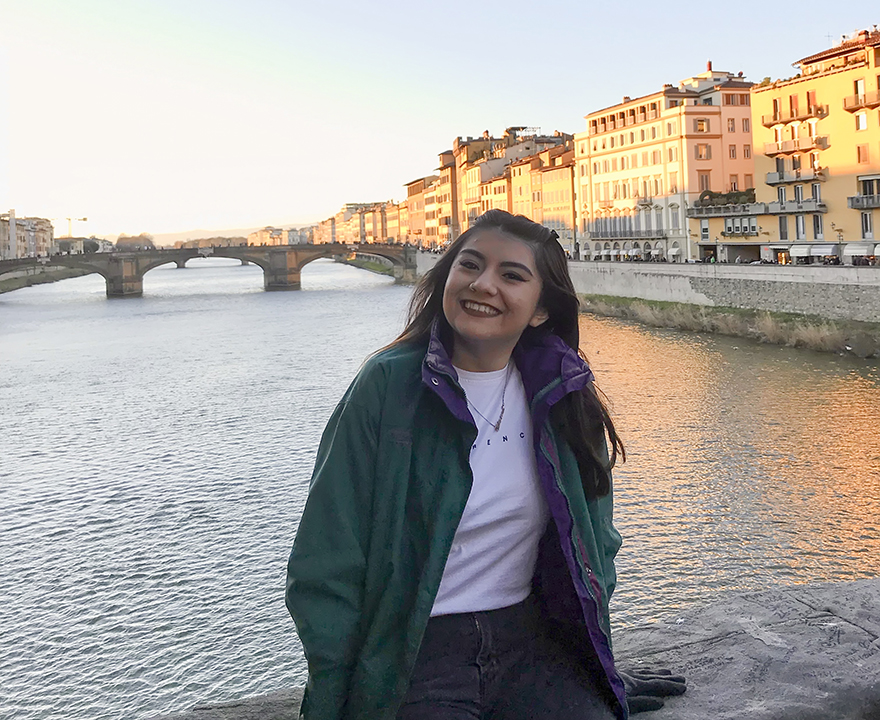 From Atwater to All'estero


Perspective is sometimes found close to home; other times it’s developed when one travels far away. For Elianet Romero, it has been a little bit of both. From a childhood in one of Los Angeles’ most ethnically diverse neighborhoods, to a college student on exchange in Italy, Romero continues to demonstrate that her desire for an understanding of cultural paradigms knows no borders.

At home in Atwater

Growing up in the Atwater Village neighborhood of Los Angeles, Elianet was surrounded by the highly diverse population that has defined her community since its founding. With roughly half of residents born abroad, the heritages found in her neighborhood inevitably shaped her worldview as well as her perception of her place within it. Her views on race, ethnography and culture were formed by observing the community around her.

Her parents, who emigrated from Mexico in the eighties, often worked multiple jobs to make ends meet. With more than ten years difference between Romero and her next sibling, she often found herself in the role of caretaker. She views this responsibility as being central to her identity, and it has motivated her to continue to provide guidance for her younger sister and brother, encouraging them to go to college.

As a young student, Romero set herself apart academically, and at the encouragement of her teachers, applied to and attended magnet schools outside her neighborhood boundaries. Romero says she took it upon herself to “craft her own education,” and as a result was surrounded by high achieving students with college dreams. Upon graduation from Francisco Bravo Medical Magnet High School in Boyle Heights, Romero knew that her next step was to become an Anteater.

When she first arrived at UCI, Romero believed she would pursue a career in law, and declared philosophy as her major. However, when she took an international studies course taught by lecturer Thomas Douglas, she realized she had found her true passion: “It wowed my mind,” says Romero “learning about different cultures.” With a new focus in sight, Romero switched her plans and declared double majors in international studies and political science.

When she was a freshman, Romero set a series of specific goals for her time at UCI, to focus her efforts as well as expand future opportunities. These goals included studying abroad, participating in UCDC, serving as a resident advisor (RA), doing research, and joining Greek life. As she nears her June graduation, she is especially proud that she has accomplished each one of these goals.

In particular, her time with UCDC was eye-opening and ultimately shifted her academic path. UC Washington Center (UCDC) is a program that allows for UC system students to live, work, and conduct research in the nation’s capital. Through UCDC, Romero was able to spend last summer serving as a business development fellow at the U.S. Hispanic Chamber of Commerce. There, she helped small Latinx businesses partner with global brands such as Google, Coca-Cola, and Apple, and coordinated a conference in Philadelphia to help these businesses network with each other.

This life-changing experience led her to walk into global & international studies assistant professor Ruth Goldstein’s office in the fall to explore ideas for her senior thesis. Romero made a strong impression on Goldstein, who says that she “was simply blown away with the depth of her insights and intellect. ‘Internalized colonialism’ is not something that most 18-year-olds in the United States are thinking about… not unless they have lived with and through experiences of a deeply stratified United States.”

With Goldstein’s guidance, Romero moved forward with her research.

“Her question about colonialism, how people come to fear one another and maintain lines of social hierarchies is an enduring and global one,” says Goldstein.

Romero cites the inherent racism amongst Latinx cultures toward other Latinx cultures as being a driving force for her to pursue a career in the study of race and culture. The question her thesis seeks to answer is “How is it that the very Latinx communities that should be supporting each other – supporting immigrants from Latin America – are instead deeply divided and against one another?”

If UCDC piqued Romero’s interested in immigration and politics, then Italy sealed the deal.

Wanting to expand the foundation of research for her thesis beyond the U.S., Romero applied for and was accepted into the UROP (Undergraduate Research Opportunities Program) and traveled to Rome, Italy for her spring 2019 term. There, she enrolled in Italian politics, Italian media, and, of course, Italian.

Already bilingual, Romero saw this as a chance to acquire a new language. Moreover, she viewed the experience as a unique opportunity to expand the scope of her thesis to include the study of racism in other cultures. In particular, she was drawn to the perception that Italians have toward African immigrants, and how these attitudes influence daily life in Italy. In particular, Romero noted the tactics of Italian politicians, learning more about “...the politics behind Italy, how politicians use racist platforms to gain more border support, and how they use anti-immigration platforms to get more Italians to vote for them.”

Philip McCarty, professor of teaching in global & international studies who led Romero’s honors seminar, recognized that her determination, along with her background, made for a powerful combination. “Students that take charge of their own education in this way end up with a capstone project that lets the world know they did more than just sit in classes,” said McCarty. “The thing that struck me was that Elianet wasn't sitting around waiting for permission to make the most of her own potential.”

Romero sees the similarities in the issues facing the U.S. and Italy as going well beyond immigration and race. She points to the way the Republican party in the U.S. uses anti-immigration rhetoric to draw more voters, much in the same way as is done in Italy. In fact, Romero feels as though she has barely scratched the surface when it comes to studying race, culture, immigration, and racism.

So much so, that Romero’s future plans include pursuing a Ph.D. to continue her research and expand her thesis. “Elianet Romero is a scholar-in-the-making,” says Goldstein. “She would do an incredible job at whatever she puts her mind to, but she has decided that graduate school and becoming a professor is her dream. I look forward to the day that professor Romero is teaching classes. Her students will be lucky to have her.”

One of her favorite experiences at UCI was serving as a Residential Advisor (RA) for international students. Working with exchange students from Brazil, Russia, China, Japan, Portugal, Spain, and other countries, Romero worked to help students integrate into American culture and navigate social and academic challenges. She states that preconceived notions that some international students have regarding America made her job challenging at times. She made it her goal to “cater to their needs, but at the same time, teaching them that American stereotypes aren’t true.”

Romero set up social events to help students mingle, both amongst themselves as well as the general UCI population. She also helped give them opportunities to practice their English, both formal and informal. She is grateful to have had this experience as an Anteater.

Interested in documenting her experiences visually, Romero has recently adopted photography. She enjoys capturing her surroundings in her daily life, but in particular, has found a way to use imagery to support her thesis. Additionally, she enjoys photographing her neighborhood in Los Angeles, as it undergoes significant cultural and aesthetic changes through gentrification.

A world of possibility

Romero is intensely proud that she will be the first college graduate in her family, and is thankful for the opportunities she’s had at UCI: “I’m grateful for the people I’ve met at UCI... people I’ve interacted with… even just little things have helped me to be here.”

Having sought and earned opportunities she never thought possible has opened up a world of potential for Romero, who looks forward to being an ongoing part of the discussion and research on race, culture, and ethnography.