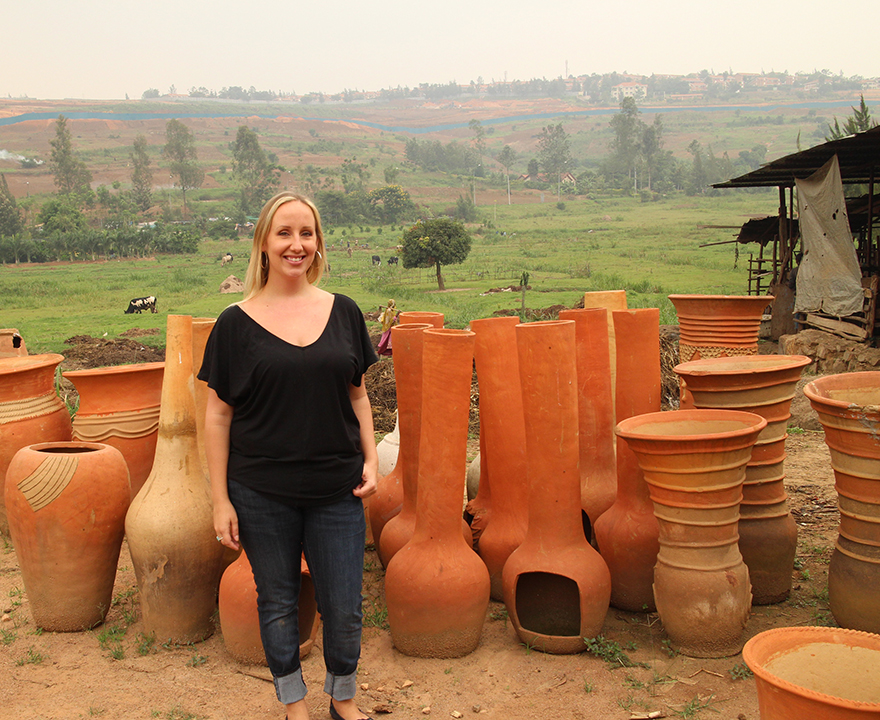 
For anthropology graduate student Anna Kamanzi, Rwanda has become like a second home. In 1994, the small central African country drew international attention in the wake of a horrific genocide where as many as a million people were killed within 100 days.

Kamanzi first visited Rwanda 17 years after its civil war ended, and by that time the government had outlawed any mention of ethnicity – trying to avoid anything that would further divide people. As Kamanzi did preliminary research with a human rights organization, she came across a group of people rarely talked about in Rwanda, the Twa. Making up less than 1% of the country’s population, these indigenous people used to live in the country’s tropical forests.

“I became interested in their experiences and why they were so excluded from dominant narratives about Rwanda,” says Kamanzi.

The Twa people were pushed out of their homes in the country’s lush national parks largely due to wildlife conservation efforts. Not only are the Twa landless, their previous livelihoods differ from the majority of the country’s farming communities. Regardless of whether their struggles as an ethnic group can be talked about openly, they often face discrimination in their day to day lives.

“Because reconciliation efforts have attempted to remove ethnic and indigenous categories in Rwanda, it makes it difficult for Twa people to make claims to land rights or specific protections based on their indigenous status,” explains Kamanzi, who speaks Kinyarwanda. “I am interested in how Twa people and various organizations who work with them craft alternative representations of their identity and position themselves in order to navigate transitional justice efforts which limit certain identity discourses in the country.”

Kamanzi’s advisor, anthropology professor Victoria Bernal, points out that most existing research on indigenous people focuses on the U.S., and this project will help understand the experience of indigenous people in the 21st century elsewhere in the world.

“Despite Western obsessions with notions like 'tribalism' and 'tribal conflict' when looking at Africa, the ways African ethnic identities are constructed, reproduced, and transformed in our rapidly changing world remain poorly understood. Anna's project will advance knowledge in this area,” says Bernal.

In July, Kamanzi will return to Rwanda for the fifth time, basing herself in the capital of Kigali and traveling to rural areas on the outskirts of Volcanoes National Park to conduct her research with Twa people and non-governmental organizations.

Her longest trip to Rwanda was in 2013-14 for a year, when she was the first Cal State Chico student to win a IIE Fulbright research grant. At that time, she studied how urban and rural Twa communities differed in their access to social services and livelihoods after being relocated into village settings.

This time, Kamanzi’s research is funded by a prestigious Fulbright-Hays grant, which will support 9 months of fieldwork in Rwanda.

“Fulbright-Hays is a very competitive award, so it is particularly impressive that Anna was awarded a Fulbright-Hays so early in her graduate studies,” says Bernal. “This is a stellar achievement.”

For Kamanzi, the benefits of winning the Fulbright-Hays go beyond the prestige.

“What I really love about Fulbright is that they build in a means of support for spouses and dependents,” says Kamanzi.  “So for me, getting a Fulbright grant really meant that not only was my research supported, but my family was supported.”

As she completes her fieldwork in Rwanda, Kamanzi will have her two children with her, as well as her husband, who is originally from there. Not only will the visit provide a vital research opportunity, but it will offer valuable time with extended family in the region.

Kamanzi admits that raising a family while conducting graduate research and teaching classes is not always easy. In fact, she worried that pursuing a Ph.D. as a mom would make her feel marginalized herself.

“Deciding to pursue a Ph.D., especially as a mother, was a huge decision,” says Kamanzi. “I didn’t want to commit to a campus that had an unhealthy environment for graduate students or where I wouldn’t be supported as both a student and a parent, so I chose UCI for its collaborative and welcoming vibe, especially among current grad students.”

Thankfully, not only the other graduate students but also the faculty at UCI helped make it manageable.

“I speak from personal experience when I say that academia is tough and unforgiving when it comes to motherhood, in particular,” says Bernal. “So I feel that I understand the obstacles Anna faces and I have greatly enjoyed mentoring her and seeing her project develop.”

Even before she accepted the offer to come to UCI, fellow graduate students who were also raising children reached out to Kamanzi to make her feel welcome. Eventually, she and several other parents formed a reading group that evolved into a strategy group to address the unique needs of parents in academia. Calling themselves the Ph.D. Mama Collective, the team published an op-ed about how universities can better support graduate students who are parents.

“There’s been a really wonderful community of student parents that I’ve become a part of,” says Kamanzi, “and that has made my experience so much more enjoyable.”

Pictured: Twa people are well known in Rwanda for their pottery making skills, a craft they have been practicing for many generations. Here in Kigali, Twa artisans have modernized their pottery-making techniques and formed a cooperative to attract both foreign and local customers.