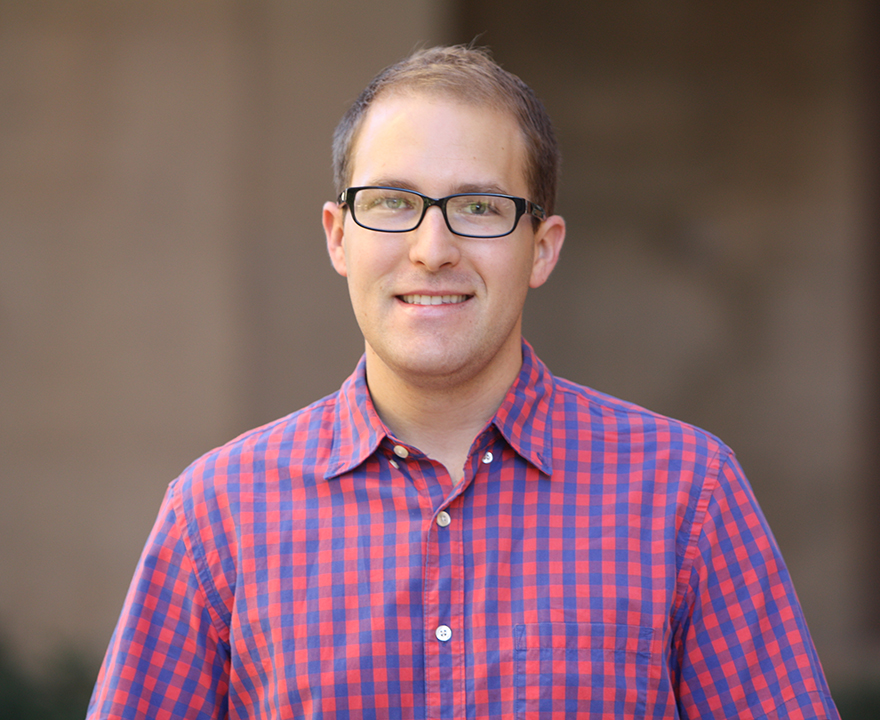 
An image that sticks with Ph.D. student John Emery is a wall of televisions alight with the bombing of Baghdad. He was thirteen and in a Walmart in his hometown of Stansbury Park, Utah. It was 2003 and the “shock and awe” campaign was in full force. Screen after screen projected the flashes from bombs and the flattening destruction.

Thinking back, Emery says, “I’ve been interested in war and politics since I can remember.” Today, he’s in his sixth and final year of his Ph.D. program in the Department of Political Science at UCI. His research explores how technology (e.g. drones and artificial intelligence) may change how we think about ethics on the battlefield.

“There’s a false belief that we can make war more predictable and therefore more ethical with an increase in technology. We assume that technology is better than humans, but we forget that humans wrote the codes that run the technology. We haven’t eliminated human error, just buried it,” he says.

To emphasize his point, Emery recalls the 2003 bombings of Iraq that he witnessed on TV as a teenager.

“The military ran an algorithm to determine the probability of collateral damage. It turned ethics into a keystroke. Just because you’ve run an algorithm, doesn’t mean you’ve exercised due care. Technology proports to get rid of human bias and error, but it also takes away the positives of human judgement, like empathy and compassion,” he says. “What worries me the most is technology often removes us further from the act of killing. The more divorced you are from the consequences, the easier it is to kill.”

In an effort to limit this distancing, Emery turns to more unconventional sources for a political scientist. He considers art and poetry to better understand, if not make sense of the consequences of war. As an example, he cites the personal account of Guy Sajer in his book The Forgotten Soldier:

There is nothing but the rhythm of explosions, more or less distant, more or less violent, and the cries of madmen, to be classified later, according to the outcome of the battle, as the cries of heroes or of murderers. And there are the cries of the wounded, of the agonizingly dying, shrieking as they stare at a part of their body reduced to pulp, the cries of men touched by the shock of battle before everybody else, who run in any and every direction, howling like banshees.

“Political scientists tend to view war as a cohesive narrative after the fact. The poet captures the horrors of war that many war ethicists miss,” he says. In a way, Emery’s interdisciplinary approach is his political scientist’s attempt at due care. He considers his subject from all angles.

“He’s comfortable having conversations in art history, anthropology, security studies, computer programming, you name it. His research is cutting edge and at the intersection of all these issues,” he says.

Emery’s success as a graduate student has, in many ways, operated like a series of opened doors. A paper he wrote for a class led to his presenting that paper at a conference, which led to his participation in another conference, which led to winning the Frances V. Harbor Essay Prize for the best graduate student conference paper, as well as an essay in Ethics and International Affairs, one of the leading journals in his field. This succinct summation, of course, belies all the hard work, networking, and passion that made all of it possible.

In addition, Emery was selected as one of five UCI Ph.D. students to receive a Technology, Law, and Society Fellowship funded by the National Science Foundation. He’s written book reviews, published more articles, and was invited to write a series of academic blog posts. He’s also a lecturer for the master of arts in international studies program at Chapman University.

Says Brunstetter, “He’s pushed me in new research directions. Whenever I have a new idea, I run it by him over coffee or dinner. He offers support and incisive discussion. I see him more as an intellectual peer than a student.”

If Emery’s interest in war and politics can be traced to a Walmart in Utah, his path to a Ph.D. can be traced to a basilica in Italy. As an undergraduate at Gonzaga University, Emery pursued international relations broadly as part of his European studies major, but it was really his time studying abroad that cemented his academic interest in politics. While in Florence, he worked as a tour guide at the Basilica di Santa Croce, which happens to be where Niccolò Machiavelli, the father of modern political science, is buried. Delving into the writings of Machiavelli for his role as tour guide sparked his interest in political theory. With the urging of his undergraduate professors, Emery decided to pursue a Ph.D. in political science.

Emery admits to having arrived at UCI with a little uncertainty.

“I’m not sure what I said I was going to research on my application,” he says laughing. Instead, he arrived at his dissertation topic through course readings and discussions with faculty and fellow graduate students. “I’ve been allowed to pursue my interests in a way other programs may not have allowed me to,” he says.

Personally, he says, “It’s hard to live in place you’ve never lived before while being thrown into the most difficult endeavor of your life. The graduate students here have really cultivated a community and praise each other in good times,” he says.

“He has really been instrumental for my success in the program and in helping me carve out my own space in academia. Everyone in the community has been open and accepting and has made me feel I have an academic home.”

A lot has happened since Emery was a boy baffled by the images of war he saw on those television screens in Walmart.

“Our country has been at war my whole adolescent and adult life. At Irvine, I’ve found a space to articulate the things that have been on my mind for a long time. Now I have a venue to tease out these dilemmas,” he says.