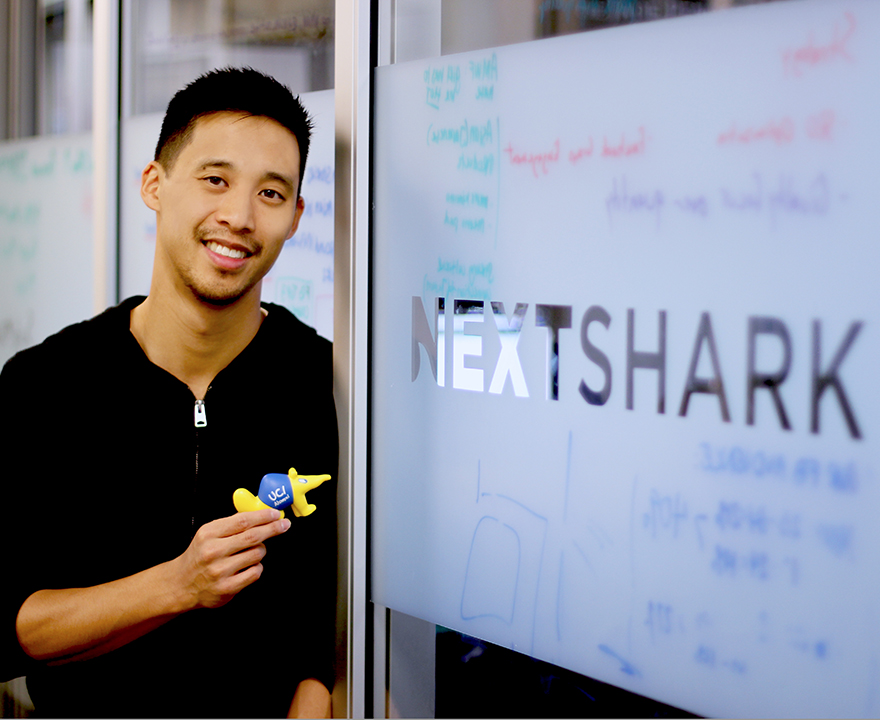 
Benny Luo, psychology ’10, is the poster boy for what a startup CEO looks like in 2018. He’s young (29), friendly, and his shared office space boasts a mix of colorful figurines lining the windowsills and desks (including a blue and gold Peter the Anteater next to his desktop). But don’t let his informal style fool you; it’s clear that there is nothing casual about his dedication to his work.

Luo is the founder and CEO of NextShark, an online media hub he describes as “the largest online publication targeting Asian-Americans and Asian youth.” The site, nextshark.com, covers topics that range from civil rights and politics to lifestyle, food, and travel, all relevant to the Asian demographic. Since its inception a little over four years ago, NextShark has run nearly 10,000 stories, has grown to support 10 full-time employees plus some part-time contractors across the U.S. and Asia, and reaches nearly three million viewers per month. The venture that Luo started with just $3,000 of his own money earned him a coveted spot on the 2018 Forbes 30 under 30 media list. But despite his success, this entrepreneur has no plans to slacken the reigns.

Luo got his start in media right out of college when he founded NewMediaRockstars.com, a company that showcased internet celebrities. He ran it successfully for two years, collaborating with big names like Coca-Cola and Warner Brothers and even getting some recognition from Justin Bieber (“he crashed our site twice”) before selling it. Then it was back to the drawing board.

“I actually started NextShark as a site geared toward entrepreneurs,” Luo says of his early vision for his company. “It did fairly well, especially considering we didn’t have funding, but we weren’t growing fast.”

When the company started noticing an uptick in engagement following posts about startups in Asia or Asians in business, they switched gears. Since then, NextShark has transitioned from simply an entrepreneurial site to an overall source for news and entertainment in the global Asian community. Articles range from lighthearted (Luo flew to Taiwan to try a famously expensive bowl of beef noodle soup) to informative (an interview with The Life-Changing Magic of Tidying Up author Marie Kondo), to serious (a profile on Peter Wang, a victim and hero of the Parkland, Florida school shooting). And what Luo appreciates most about his company is that it’s giving a voice to a demographic that he says has been largely underrepresented in mainstream media.

“We’re solving a clear problem,” he says. “The fact that we have been successful shows that there is a hunger and demand to consume our type of content.”

The company is growing, engagement is up, and the recognition from Forbes was a welcome affirmation, he says - especially since, as a startup CEO, it’s easy to get distracted by the struggles and stresses of the job and miss out on the success.

“Doing the work that I do, there’s always a fire to put out,” he says. “I love my job, but all the little things you have to do as a bootstrap company can get very draining. So I guess getting that recognition is validation that we’re doing something right here. Because when you’re in the process you don’t really feel it.”

Moving forward, Luo’s hopes for NextShark are to continue growing, eventually developing a NextShark media group. But he’s not in too much of a hurry. His biggest concern is writing quality stories that appeal to his audience. In his words, “the grind never stops.”

“There’s no end point here, at least for me,” he says. “If you want to be an entrepreneur it’s a journey. The finance part of it gets old quickly. Focusing on what you want to offer back to the world, I think, is the key.”