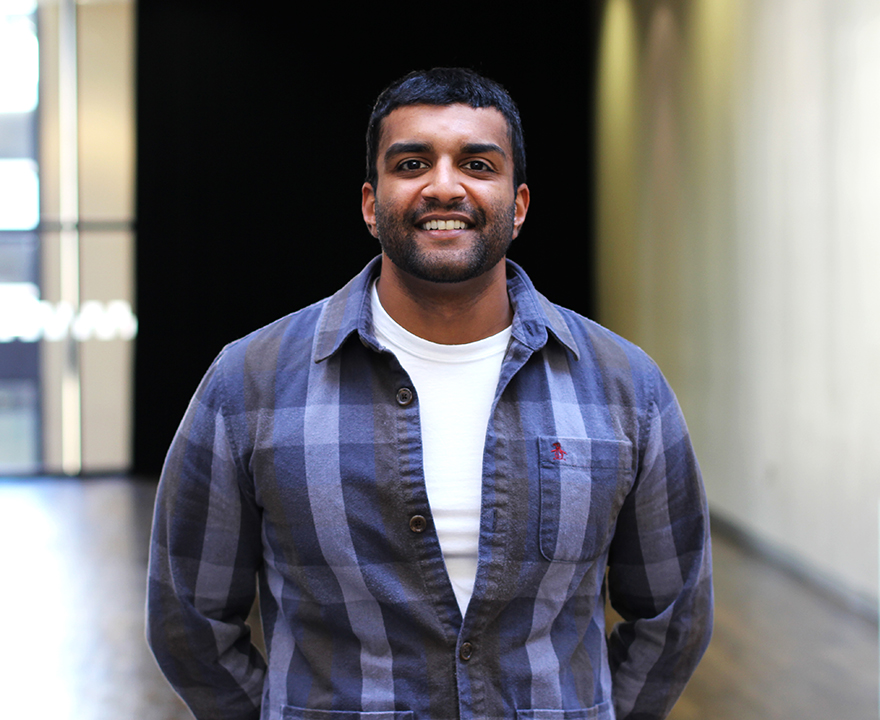 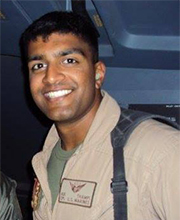 When UCI alumnus Advaith Thampi, political science ’16, was considering possible careers in the Marine Corps, the idea of working on airplanes in sunny San Diego sounded like a good gig to the then 18-year-old Bakersfield native.

“I didn’t have academic interests or really any idea what I wanted to be when I grew up,” he says. “So I hoped that enlisting in the military would help me learn some skills, as well as give me a chance to see the world.”

And see the world he did. After serving for five years – 25 months of which was spent overseas in Iraq, Afghanistan, and Japan –Thampi was honorably discharged and came to UCI to complete his bachelor’s in political science. He did so with flying colors, graduating cum laude and a member of the Phi Beta Kappa honors society. Now he’s working toward his J.D. at Chapman University in nearby Orange, and hopes to eventually go to work as a lawyer serving the veteran community. It’s not a future he could have imagined for himself as that teen in Bakersfield, but he’s pretty thrilled that he finally knows what he wants to be when he grows up.

The path to get to where he is now wasn’t always clear for Thampi. After finishing high school, his choice to join the military was partially due to a lack of options (“I struggled a lot in high school,” he says), but also because of his mother. She had immigrated to the U.S., and he had always felt that the country helped their family live the American dream. In short, he wanted to give something back.

So that’s how, without prior interest or experience in mechanical engineering, he ended up serving as a crew chief on C-130 aircrafts. It was a highly technical job that required his calculations to be precise in order to get his team safely to their destination. And though he could have continued on the engineering course after his service, he knew he wanted to put the numbers behind him once he arrived at UCI.

“Deploying over seas to Iraq and Afghanistan got me very interested in foreign policy and international relations – especially in the Middle East,” he says. “So I knew I liked political science, but I was still trying to figure out how to align my personal interests with a career.”

Luckily, he stumbled upon one of political science professor Cesar Sereseres’ classes early into his first quarter on campus. Thampi quickly adopted him as a mentor.

“I loved everything about Dr. Sereseres’ classes,” he says. “The topics, like the history of U.S. foreign policy, homeland security, and diplomacy, really appealed to me – I had actually read some of the books he assigned for class before I took his courses. And he’s just so cool. He genuinely cares about all his students wants to help us all succeed – not just in school, but in life.”

In fact, it was Sereseres who sold Thampi on his eventual career track. After many discussions about what his goals were following college, they found a path that he was excited to follow – to become a lawyer in order to advocate for improvements in veteran healthcare.

The choice was a perfect marriage between Thampi’s educational interests and his personal passions. After returning home from service, he had remained very close to the veteran community, spending time in the VA Long Beach Healthcare System, and working with both the veteran’s center at his community college and the Veteran’s Affairs Center at UCI. Being so close to the community for so many years, he was able to see shortcomings in certain areas that he felt needed to be addressed. In particular, he was disheartened to see how long it took for a veteran’s health care to become active once they returned home. According to what he’d witnessed and researched, the best-case scenario is around three months after returning – meaning if everything works as it should, a veteran will go that long without any health coverage. But he was also very troubled by certain stigmas among veterans, specifically that seeking medical attention is a sign of weakness, which leads to many veterans going untreated for PTSD and other mental health issues.

“For vets, I think a big problem we have is this mindset of, ‘nothing’s broken, nothing’s bleeding, I’m fine,’” he says. “And I think that’s a significant factor in the veteran suicide crisis, which is a tragedy that I want to spend my life trying to solve. We don’t look at a PTSD injury the same way we look at a broken arm.”

Thampi had concluded that the veteran healthcare system was a great asset, albeit one with some broken and missing pieces, long ago. So when he and Sereseres touched on the idea of enacting policy change to help, he knew they were on to something. And, since his mentor told him that the best way to achieve that goal was by going to law school, he decided that’s what he would do.

With a clearer goal and the motivation to help his community, Thampi set to work. Though he was a transfer student and only had two years on campus, he managed to pack plenty into his time as an undergrad. In addition to hitting the books hard to raise his GPA, he found time to study abroad in Italy and Spain, and complete a semester in the UCDC program where he interned at National Defense University, a foreign policy think tank funded by the U.S. Department of Defense. By the time he was ready to graduate, the hard work had paid off; he was named the UC Irvine Veteran Scholar of the Year, and graduated with a number of accolades including the Order of Merit from the School of Social Sciences, and the Chancellor’s Award of Distinction.

Now Thampi is in the midst of his second year at Chapman University’s Fowler School of Law and hopes to go on to work as either a lawyer for the VA, or with a pro bono firm such as the Southern California-based Veterans Legal Institute. But even though his focus has shifted to earning his J.D., he’s been sure to remain in contact with many of the people he met at UCI. He still visits Sereseres a couple times a year (“just to make sure my life is still on track,” he jokes), and back in May he addressed a crowd of his peers and supporters as the keynote speaker at the UCI Veterans Appreciation Dinner. In fact, he only has one regret regarding his time as an Anteater – that it wasn’t longer.

“Honestly, UCI was only amazing and a beautiful experience, I only wish I could have stayed longer,” he says. “The university has so many resources available not only for non-traditional students like me, but veterans as well. It will always be a special place for me, and I will always be thankful for the faculty and administration who make UCI the special place that it is."