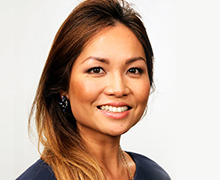 
It’s safe to say that Tami Bui ’02 made the most of her time as an undergrad at UCI. Instead of coasting through her college career, the political science major was constantly busy – traveling to Sacramento on scholarship, working with the Asian Pacific Student Association, and hitting the books in one of her favorite corners of the Cross-Cultural Center. And despite being so involved (or likely because of it) she managed to graduate with honors and glowing references from her professors. Now the associate vice president for government and community relations at Cal State Fullerton, Bui is thrilled to be serving the public university system, and is eager to help the next generation of students get the most out of their education, too. That is why she is proud to be returning to the UCI campus on Sept. 25 to impart some wisdom to the School of Social Sciences’ incoming freshman class at the annual Dean’s Welcome.

Raised by hardworking parents and with a go-getter mentality, Bui is a strong believer in the “life is what you make it” philosophy. It’s why, as a first generation college student commuting to the local university, she wanted to make sure that she didn’t take the chance to get a higher-education for granted.

“As a first-gen college student, I just felt like I wasn’t going to squander this opportunity I was given,” she says. “I was one of those students where, we were allowed to take up to 20 units, so I took 20 units. Because I thought, ‘this is my education, so I’m going to get every ounce out of it that I can.’”

Bui became involved with the UCI Cross-Cultural Center and the Asian Pacific Student Association. She also took advantage of various internships to help her home in on a career path in government affairs, and was sure to utilize on-campus resources like the Career Center and Office of Undergraduate Studies. She strongly encourages incoming students to do the same.

“In your first year as an undergrad, there are so many opportunities you can choose from,” she says. “Whether academic or cultural clubs, tutoring or Greek life. And the more you get involved, the more things you find that you can do.”

“It’s about making the most of your education,” she says. “You’re there anyway, so don’t you want to get as much out of it as you can?”

Aside from encouraging students to get involved, Bui’s top piece of advice to the incoming class is surprisingly simple, but she says not enough students do it: go to office hours.

“Some of your professors are going to be lecturing to 500 students, but if you go to office hours you really can create a close relationship with them and they can be super helpful,” she says. “They want you to succeed.”

From getting tips on which chapters to study for the midterm to clarification on a paper topic, Bui stresses that there is no one better to answer these queries than the professors themselves. But there are even bigger potential benefits to taking the time to get to know your instructors.

“One thing I think people inevitably need at one point or another is references,” she says. “And when you’re a recent college graduate looking for your first job, if you established genuine relationships during your academic journey, your professors can be those references for you. Think of them as potential lifelong cheerleaders and sponsors for you.”

She names social sciences associate dean of undergraduate studies and political science professor Mark Petracca as one contact she has been able to use as a reference at every position she’s applied to since graduating from UCI. But more than that, she places tremendous value on having a member of the faculty who cares and can help students find opportunities. In her case, Petracca’s guidance led her to apply to the California Senate Fellowship to work in Sacramento that eventually led to a career position in government affairs. From there, she took a position with Southern California Edison managing government relations, and just last year left as the head of corporate philanthropy. Recently, she transitioned into her role at Cal State Fullerton. In this way, UCI has changed the trajectory of her life.

“I literally wouldn’t be where I am without the education I received at UCI,” she says. “My kids will have a much different life than the life I had because of that education.”

Bui notes that her situation all goes back to having the self-motivation to make the most out of her education. But she says that for those who are willing to put in the work, UCI offers them everything they’ll need to succeed.

“You can customize your education to get everything you want out of it, you just have to be willing to take the reins,” she says. “If you’re willing to do that, you’re at an institution that will help you to flourish.”