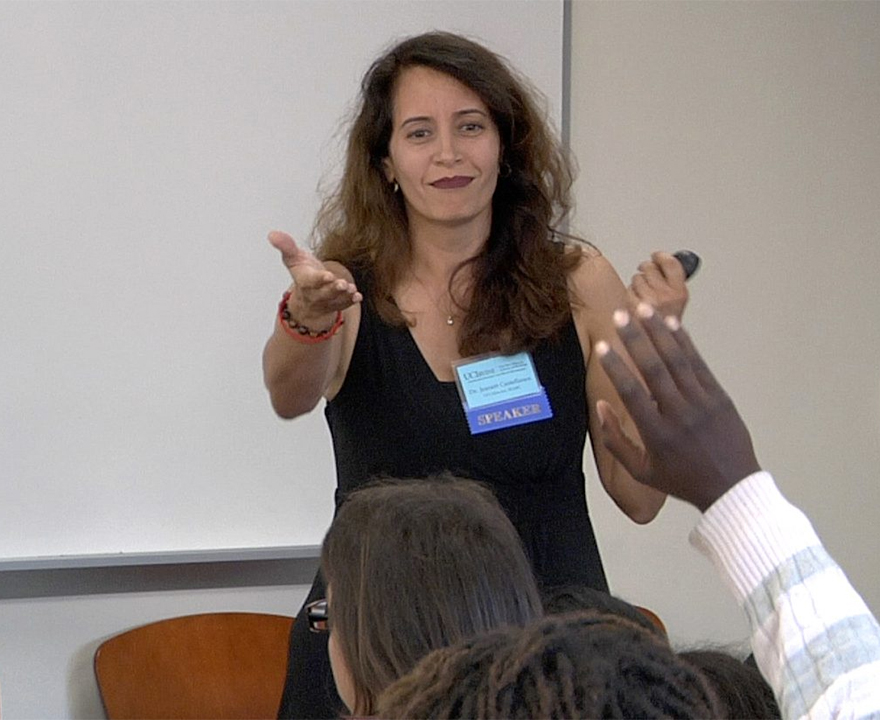 
Her list of “kids” – more than 150 Anteaters long – reads like a Who’s Who at the nation’s top graduate schools. Harvard, Michigan, Wisconsin, USC, Missouri, UCLA, NYU, Illinois, Berkeley, Chicago, Oregon, Texas, Ohio State, Washington, to name a few. They’re also in high level posts at esteemed institutions throughout the U.S. as professors, psychologists and administrators – including a current dean at the University of Michigan and the assistant dean at Oberlin College.

For Jeanett Castellanos, or “Dr. C” as she’s commonly known around campus, these former students aren’t just people who passed through her classes. They and her current charges are her mentees, her academic family, her kids – and a majority are first generation, under represented college students. From the time they enter UCI until they leave, she knowingly and willingly commits years of her time to develop them as young professionals vested in their communities. And when they leave, they take with them an edict from the social sciences lecturer – pay it forward.

“Being one of Dr. C’s kids means that you’re part of an academic family that will provide you with strong support and challenge you to reach your full potential,” says Marlen Kanagui-Munoz, ’07 UCI and a Ph.D. grad of the University of Missouri, Columbia, and one of Dr. C’s biggest advocates. “It means that you are expected to engage in scholarly research that is culturally competent, socially conscious, methodologically rigorous, and ethical. It means that you be prepared to be a competitive applicant for admission into top ranking graduate programs in education and the social sciences at a national level. Finally, it means you are willing to pass on the gift of mentorship to those who need it wherever your career may take you.”

Her guidance isn’t something to be taken lightly; Castellanos has strong expectations of those she takes under her wing. But the reward is substantial – and it doesn’t end when her mentees leave UCI.

“Good mentorship fosters purpose, public service, and social change. My mentees are taught the importance of community and social responsibility - the role of giving back,” she says. “I connect the degree to their role in the community and consequently the degree is viewed with greater value. Specifically, it is not simply a diploma that will guarantee extra money and social mobility (which are important) but a degree that leads to a meaningful career path that will facilitate social change and a valuable social contribution to society.”

It’s a lesson she learned more than 25 years ago from her own mentor, Joseph White, UCI psychology professor emeritus, and it’s one she’s been putting into practice ever since.

“They didn’t finish high school, so for me, getting a high school diploma was quite an achievement,” she says. When she was accepted to UCI, her parents were ecstatic. Her psychology classes drew her attention, and when a friend introduced her to White – the renowned “godfather of black psychology” – her path was clear.

“He took time to work with me and helped me understand that a bachelor’s degree was only the beginning,” she says. “At that point, I didn’t really know there was anything beyond an undergraduate degree.”

She graduated from UCI with majors – and honors – in psychology and sociology. But when she was accepted into Washington State’s doctoral program in education, she was a bit apprehensive about leaving home.

“Dr. White assured me it was only a pitstop and that I’d be coming back home to UCI,” she says. “He made it clear that a Ph.D. would open many doors. And when they did, my responsibility was to do the same – help and mentor other students along the way.”

White was right. Doctorate and master’s in hand, Castellanos returned home to UCI to work for the dean of students and Center for Educational Partnerships in 1998. The role offered Castellanos her first taste of the other side of the mentorship relationship as she led the campus’s Pre-Graduate Mentorship Program. The next year, she joined the School of Social Sciences as director of the Social Sciences Academic Resource Center (SSARC) and as a lecturer in the school. And in these roles, she found her calling.

“Mentorship goes beyond academic guidance - it is about personal connection and personal empowerment. It is about being invested in the student and their personal and academic development. It is fostering a space for them to grow as individuals and scholars,” she says.

UCI is a perfect place to put that concept into practice. The campus has earned top rankings on multiple scales for fostering diversity while providing a high-value education at a relatively low cost. It was recently named a Hispanic-serving institution for 2017-18, meaning that fully one-quarter of undergraduates identify as Latino and that half of all students receive financial aid. And The New York Times’ College Access Index found UCI to be the No. 1 university doing the most for the American dream because of its commitment to upward mobility.

Castellanos – who currently oversees the social policy & public service major and the Social Science Honors Program – has been critical to the campus’s success in creating this environment for students. But she’s quick to point out that she doesn’t do it all alone.

“As a product of multiple mentors, I do not mentor my students alone. Specifically, I have multiple colleagues across campus (and across the nation) that share the mentorship process with me. At UCI, I work with various colleagues in the School and across campus to maximize students' experiences, resources, and opportunities. My mentorship paradigm is a collective approach that is inclusive of others in the university - fostering collective responsibility and facilitating a collective outcome.”

Her approach and attitude about the importance of mentorship come through in her research. Her nationally recognized work merges the fields of counseling and higher education with a particular focus on Latina/os. She has published widely on the topics including two books entitled: The Minority in the Majority: Expanding the Representation of Latina/o Faculty, Administrators and Students in Higher Education and The Latina/o Pathway to the Ph.D.: Abriendo Caminos.

Over her 19-year career as a leader on the Irvine campus, she’s racked up 4 awards highlighting her service beyond the classroom. In 2007 she received the Samuel M. Turner MENTOR (Minority Education, Nurturing, Training, Organizational advocacy, and Research) Award from the American Psychological Association; in 2008 she received the Star Vega Community Service Award from the National Latina/o Psychological Association; and in 2012 she received the Outstanding Support of Hispanics in Higher Education Award from the American Association of Hispanics in Higher Education (AAHEE). Her most recent honor: UCI’s 2016-17 Academic Senate Distinguished Faculty Award for Mentorship, an award which highlights faculty who have made outstanding contributions through mentoring of students or other faculty that takes place outside of a traditional teaching or research relationship and beyond their formal advising duties.

“It’s a well-deserved honor,” writes Lindsay Perez Huber, UCI ’03 and a mentee of Dr. C’s. Huber received her Ph.D. from UCLA and is now an assistant professor in the College of Education at CSU, Long Beach. “Dr. C has served as one of my most important mentors for well over a decade. If not for her mentorship, I believe my educational trajectory would have been very different.  I would not be a leading scholar in the field of critical race studies in education or an assistant professor up for tenure at a four-year institution. . . . Her mentorship has lasted 15 years, through every stage of my academic career.”

Castellanos’ mentor, Joseph White, agrees: “Numerous of her mentees are professionals in academia, top administrators at flagship universities, tenure-track faculty, and community leaders.  Of most value, these students were instilled with the value of mentorship and the importance of giving back to the community. It is not often that one can demonstrate such mentee success at such relatively early stage of a career.”

For Castellanos, the award is proof that she works for a campus that so highly values student development and success, particularly among first generation and under represented groups.

“At its core, mentorship promotes a sense of personal value,  empowerment, community, belonging, and academic family. I’m so excited to be part of a system that values and fosters this student centered approach. We’re all working toward the same goal and we know that there’s potential and promise in our students. It’s so rewarding to be part of an academic community that espouses mentorship and embraces the greater effort of working collaboratively to maximize students’ success.”

And UCI is lucky to have such an advocate. With only 19 years under her belt and 150 kids to her name, just imagine what the next 20 years will bring.