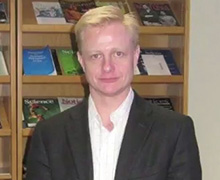 
Ragnar Steingrimsson, associate project scientist in the Institute for Mathematical Behavioral Sciences at UCI, passed away in his sleep on May 22. He was 50.

Steingrimsson received his Ph.D. in cognitive sciences from UCI in 2002 and went on to complete postdoctoral work on the Irvine campus and at New York University before starting work full time at UCI’s Institute for Mathematical Behavioral Sciences as an assistant project scientist. Alongside renowned cognitive scientists Duncan Luce and Louis Narens, Steingrimsson pursued research on subjective evaluation of sensory intensities – how people understand loudness, brightness, pain and other senses. At the time of his death, he was working to provide scientific evidence for a comprehensive theory of Luce’s that explained and integrated judgments of intensity within and across sensory domains.

“As a graduate student in cognitive sciences, Ragnar did his doctoral dissertation under the guidance of Duncan,” says Louis Narens, cognitive sciences professor. “Duncan developed new mathematical techniques to study how people understand and experience senses – and Ragnar developed experimental techniques to test Duncan’s theories. Together, they published many papers in top psychology journals and developed important new methodologies for conducting psychophysical research.”

Steingrimsson also studied under cognitive sciences professors David Laberge and Jean-Claude Falmagne where he focused on attention and psychophysics and knowledge spaces, respectively. Throughout his postdoctoral positions at UCI, his research was continuously funded by the National Science Foundation and Air Force Office of Scientific Research.

Steingrimsson was an avid runner and a native of Iceland. He earned a certificate in French language at the University of Paris, Sorbonne in 1989, and then headed to the University of Copenhagen, Denmark where he earned his bachelor’s in film and communication in 1991 and his bachelor’s in computer science in 1992. He came to Chapman University in Orange, California where he earned an MFA in 1994 and his master’s in English in 1995. He then joined the UCI Department of Cognitive Sciences graduate program, earning his master’s in 1998 and his Ph.D. in 2002.