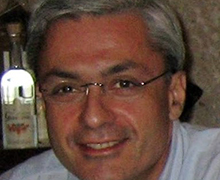 
The Department of Logic and Philosophy of Science is deeply saddened by the unexpected death of its founding member and former chair, Aldo Antonelli, on October 11, 2015. Professor Antonelli joined LPS in 1998 and served as its department chair in 2007-08 before moving to UC Davis in 2008. He was a leading figure in pure and applied logic, his contributions ranging from non-monotonic logic and the revision theory of truth through non-standard set theories to generalized quantifier theory, the foundations of arithmetic, and Frege scholarship. Professor Antonelli was instrumental in establishing the department's reputation in mathematical and philosophical logic as well as the foundations of mathematics. He will be remembered as a brilliant logician, a wonderful colleague, a dedicated and enthusiastic teacher, and a great friend.