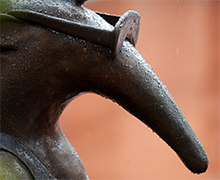 
--courtesy of the OC Register--
Orange County would save $42 million a year in health care, law enforcement and other expenses by placing people who chronically live on the streets into housing, according to a first-ever countywide study of the costs of homelessness.

The study, conducted by UC Irvine researchers and released in summary form Tuesday, aimed to pinpoint how much money was spent on services and other costs related to homelessness during a 12-month period in 2014-15 by local cities, the county and non-governmental agencies. Overall, the price tag came to about $299 million, with the lion's share – roughly $120 million – borne by the 34 cities that comprise the county.

While this is the first such analysis conducted in Orange County, similar studies have been done in other parts of California, including Los Angeles, San Diego and Sacramento, although those were not as comprehensive, the UCI researchers said.

The full UCI report is due in May but among key findings: It would be much cheaper to invest in a "housing first" approach to get homeless people off the street than to continue to pay for a revolving door of emergency and interim services.

The study was led by sociology professors David A. Snow and Rachel Goldberg at UCI and is the outcome of a partnership involving the university and two nonprofits, Orange County United Way and Jamboree Housing Corp.

The cost analysis was discussed during United Way's update on the organization’s FACE 2024 initiative, which aims to dramatically make a difference in housing, health and the financial stability of families. Special emphasis was put on homelessness with the release of the cost study and a keynote address by Nan Roman, who heads the National Alliance to End Homelessness.

The study's aim was twofold: Estimate the economic outlay for homelessness in Orange County by government agencies and non-governmental organizations and show how costs vary from people who live on the streets, in shelters and in housing programs.

The UCI analysis put the financial burden on local hospitals and emergency departments at $77 million. The county government spends an estimated $62 million. Non-governmental agencies that serve the homeless, such as housing agencies like Jamboree, made up the $40 million balance.

The study assigned an average annual cost of $45,000 per homeless individual in Orange County for all services provided. Care related to health and medical issues was the most costly, and homeless people on the street who use those services most heavily drive up the expense disproportionately, researchers found.

"If the most costly 10 percent are dropped from the analysis, the mean annual cost per person drops to approximately $10,000," the study states.

And 70 percent of Orange County’s homeless have lived here 10 years or more.

“These are our residents,” Carla Vargas, chief operating officer for United Way, told the audience Tuesday at UCI’s Beckman Center. “They’re not folks that are coming here from somewhere else.”

Other key findings include:

In addition to questionnaires sent to the 34 cities, local hospitals and service agencies, Snow, Goldberg, and UCI research assistants Sara Villalta and Colin Bernatzky interviewed 252 homeless people around the county. Most were living in shelters or some type of housing program. But 89 of them were on the street.

Snow recalled one older man in a wheelchair that he met at the Newport Beach bus center near the city's civic center. The man, whom Snow could not identify because of confidentiality rules governing his research, told Snow he had been homeless for 17 years and in the past year had been brought by ambulance to an emergency room eight times.

Snow estimated the cost of those ambulance trips and ER visits at $300,000. He called the man Orange County's version of "Million-Dollar Murray," a homeless alcoholic named Murray Barr in Nevada who was featured in a seminal 2006 New Yorker magazine article by Malcolm Gladwell: over 10 years’ time, Barr had racked up $1 million in costs for emergency room visits, jail time and policing, shelter stays, and other treatment and services.

The Orange County man had lived with his parents until his mother died and his stepfather kicked him out of the house, he told Snow. He has mental health issues and suffered heart attacks and other ailments.

Based on the Register's interviews, it appears that the man Snow referenced is Peter Rowley, 64. Rowley is someone that Newport Beach Police Officer Anthony Yim, the department's sole full-time homeless liaison officer, has been trying to help.

In an hourlong conversation last week at the bus plaza with Yim present, Rowley shared details of his life that match what Snow discussed. Yim said Rowley can walk but for some reason chooses to stay in a wheelchair. Rowley said he had paralysis in his legs but "they're coming back."

He suffers from diabetes, high blood pressure and has had at least two heart attacks. He is missing multiple teeth. He often quotes the Bible. He said he doesn't drink and stopped using drugs, mostly marijuana, years ago. Yim confirmed that he has never seen Rowley inebriated. Mentally disabled since his youth, Rowley said he was mostly raised in Orange County and always lived with his parents until his mother died and his stepfather threw him out.

He cried when he spoke of needing and wanting rest from life on the streets.

"I mean, I'm 64 years old, going on 65," he said, choking up. "I don't know how much longer I'll be here."
Rowley, who still holds a patent for a non-slip guitar pick he invented, gets a monthly disability check of $980. That money is typically spent in a week, he said, most of it to rent a motel room and buy food and hygiene products. Mostly, he spends his days riding the bus to Dana Point and Seal Beach. He returns to Newport Beach at night, sleeping on the ground across the street from the bus center, with two homeless buddies nearby.

"We protect each other," he said, puffing on a cigarette.

Yim has hope that Rowley will get housing soon with the help of an outreach worker from the nonprofit Mercy House.

"We'll get through it, right Pete?" Yim said, smiling at Rowley.

"Yeah, we sure will," Rowley said, bouyed by Yim's words. He added about his police officer friend, "He's done everything he can do, and he's done it well."

Across the way from Rowley, sitting in his own wheelchair was George Harvey Brundage III, another homeless man who stays at the bus center. Brundage, 78, has trouble getting out of his wheelchair – his legs and feet are severely swollen, red and scaly from a bacterial infection.

Brundage, too, has been in and out of hospitals. He also gets a monthly disability check of $940. He was unsure when he became homeless, perhaps in the late 1990s. He said he was recently released from a lengthy hospital stay and wanted to return because his feet continued to hurt.

"I go into the hospital and it's corrected," Brundage said.

Yim finds Brundage more difficult to help than Rowley: "He'll come here, then he'll be gone for awhile. So it's hard to keep track of him."

In recent years, investment in permanent supportive housing has increased in Orange County, driven by a shift in emphasis from the federal government. Most of the money from the Department of Housing and Urban Development earmarked to address homelessness is now tied to providing long-term subsidized housing for the chronically homeless.

Based on their own research and other data, the UCI study's backers are convinced that chronically homeless people like Rowley and Brundage would not only benefit from permanent housing, but so would the bottom line for local spending on homelessness. Other programs that include rapid re-housing for struggling families also should be expanded, they say.

There is a need for emergency shelter, but many homeless people he spoke with would rather be on the street than in a shelter, Snow said.

"It's really a stop-gap. It's not any kind of solution."