More than a mentor 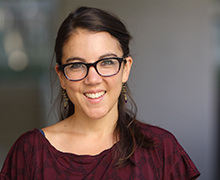 More than a mentor


As the daughter of an immigrant and a student of anthropology, Elizabeth Clark knows very well that the undocumented students at UCI do not, as she puts it, need her. They are quite capable of enacting positive change on their own. But that hasn’t stopped the Ph.D. candidate from doing everything in her power to be an ally and source of support for the more than 600 undocumented students at UCI.

Both her research and her non-academic pursuits since arriving on campus have been dedicated to helping provide a safe space for these students, and it’s precisely this passion to help—in any way she can—that has earned her the Tom Angell Fellowship.

The award is intended to honor its namesake—a longtime UCI graduate counselor—by recognizing graduate students, faculty, and post-doctoral scholars who have demonstrated excellent mentorship of UCI students. And Clark’s contributions fit the bill.

After completing her master’s degree and spending several years working as a community organizer for Casa de Maryland—an organization dedicated to advocating and expanding opportunities for immigrant people—Clark was determined to remain involved with the undocumented community once she arrived at UCI. She found a place to do just that at SOAR (the Student Outreach and Retention Center), providing support to UCI’s dreamers and the on-campus dreamers coordinator.

“With Casa de Maryland I was always involved in undocumented student struggles for higher education,” she says. “And when I came to do UCI, I didn’t want to leave those struggles behind me and feel like I somehow had less of a commitment to recognizing my privileges.”

The privileges she is referencing include being someone who was born in the United States and has citizenship, as well as being someone of a mixed race—her mother emigrated from Korea—but who most people see as white. As someone who can claim these privileges while studying activism in the undocumented community, she felt it would be hypocritical to not participate.

“I want to feel like I put my money where my mouth is,” she says. “I can’t be a scholar that writes on immigrant rights activism and the commitments we have to make and not practice that in my life.”

Her involvements include keeping up with the undocumented students she mentors—checking in on them and sending emails regarding new scholarship opportunities, for example—and providing whatever support she can to Ana Miriam Barragan, the dreamers coordinator. Some of her past actions include providing assistance organizing events and rallies and helping spread awareness to staff and faculty so that they too can offer support to the community. And as policies surrounding immigration continue to shift in this country, her support is more welcome than ever.

It’s not always an easy task to juggle her mentoring commitments with her own research, which examines how race operates in the immigrant rights activism community—specifically within often overlooked segments. But one of Clark’s own mentors, a former supervisor at Casa de Maryland, told her something that keeps her motivated.

“He said to me, ‘you, as a person who has a bed to go home to each night with no fear of immigration coming and picking you up, cannot ask of the people you organize something you would not be willing to do yourself,’” she says. “And that’s stuck with me. I can’t ask of people what I wouldn’t do myself.”

Which is why she continues to volunteer and mentor no matter how busy she is. If her students don’t have the option to put the political and social activism on hold, then she doesn’t either.

After dedicating her research and personal time to the undocumented community, Clark says that she feels honored to be receiving the Tom Angell Fellowship. However with the current uncertainty surrounding immigration regulations, she has chosen to donate the monetary award associated with it to the UCI dreamers.

Instead, she will let Barragan choose how the funds are spent, and she hopes that this action will demonstrate, at least on a symbolic level, how important it is to stand with the undocumented community.

“To me scholarship isn’t just about the change that we try to do through our writing and research, but it’s also about keeping our commitments in the process of that writing.”