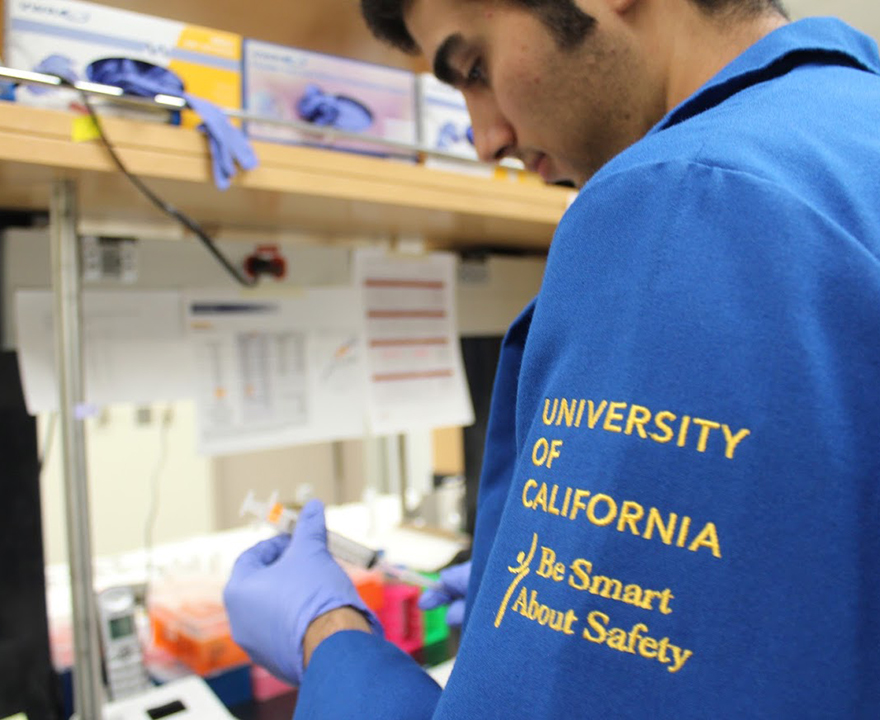 
Two questions come to mind when chatting with new anthropology alumnus Matine Azadian: First, how does one turn an anthropology degree into a career in medicine? And second, why would someone choose such an unconventional—and seemingly more complicated—path?

Azadian—a 2016 UCI graduate—seems to have the answers; he’s navigating the unusual road quite successfully. During his time as an undergrad, he earned the title of UCI’s Chancellor’s Scholar for the class of 2016; a place as the youngest UCI student to be named an Endowed Research Executive with The Bill and Melinda Gates Foundation; and—most recently—the prestigious Presidential Champion of Change Award.

The Champion of Change award, which recognizes those who are making tangible improvements in various fields across the nation, was presented in recognition of Azadian’s foundation, the Children’s Health Equity Project. Started in 2015 during his junior year, the initiative aims to serve socioeconomically disadvantaged children in Southern California dealing with disease and illness.

For the aspiring physician—who has been fascinated by the medical field since he was a small child—this project is simply one step toward his goal of changing the culture of the U.S. healthcare system from the ground up.

After being diagnosed with Type 1 diabetes, Azadian spent much of his youth in and out of hospitals where, instead of watching television, he would study the actions of his doctors.

“I remember getting in trouble because I would get out of bed when I was hooked up to an IV,” he recalls. “I would stand in the doorway of my hospital room so I could watch the doctors and then run back to my bed when someone came my way.”

Though he was fascinated by their work, he recalls feeling very distant from his doctors, many of whom he says treated him as a set of symptoms as opposed to an individual. In all his time spent in hospitals, Azadian said there were only two physicians who took a step back to look at him as a person. So when he met them, he tried to find out what made them different from the others.

“I learned that those two were not science majors in their undergrad,” he says. “One was an English major and one was an African American studies major. So they took a step back before they even got into medicine and learned to look at the bigger picture.”

It was then that he decided that he wanted to follow a similar path, which he believed would prepare him to take a less clinical, and more humanistic, approach to patients. By his second year at UCI, he left behind most of his pre-med cohort in the biology major and made a beeline for anthropology.

He instantly felt more at home there. He continued the necessary pre-med courses in the biological sciences as well, and thrived under the guidance of UCI Vice Chancellor Thomas Parham and UCI neurology assistant professor Dr. Yama Akbari—both of whom he says he could not have succeeded without. But while he says he can appreciate the laser-like focus of those in the hard sciences—and he still does focus like that during some of his research—he enjoys looking at the broader impact of the work he is doing. And the social sciences gave him the platform to do just that.

“I became an anthropology major because it makes you look at problems as a whole,” he says. “Sure, I’m still studying and memorizing neuropathways, but I can also pull back and, through my anthropological training, consider why my research is important.”

Making sure his work has an impact is of utmost importance to Azadian, and it goes hand in hand with his desire to utilize the privileges he has to help those less fortunate. It’s what eventually led him to create the Children’s Health Equity Project, after he recognized the disparity between his access to diabetes medications and the access of those who were covered under government-funded insurance.

Azadian, who has private insurance through the university, was continuously given more than he needed: Syringes, insulin, and test strips were going un-used each month. Yet when he volunteered at free clinics, he witnessed many people, including children, not getting enough of their medications to last the month.

For a type I diabetic, running out of these supplies means feeling sickly and exhausted until a refill of the medication is available. For kids, that can cause struggles in school and lead to the child falling behind his or her peers. Azadian experienced it himself before he came to UCI.

“That’s what clicked with me the most: That even children who were supposed to be fully covered were not getting enough medication.”

To combat this issue, he started an incentive program, targeting people - like himself - who had extra prescriptions. Once a person donates their medication, they are able to accumulate points that can later be redeemed for gift cards. Azadian then donates these medicines to free clinics so they can be distributed.

“Now when a kid comes back to the clinic after running through his supplies, he won’t be hit with a bill for hundreds of dollars for more medicine.”

The project has taken off, with backers such as the Shawn Carter Foundation. And now that he has finished his bachelor’s degree and the foundation is up and running smoothly—bolstered by attention the Champion of Change Award has garnered—Azadian plans to continue overseeing the project while keeping it in the hands of UCI students. He’s thinking about electing a president and government to run the day-to-day operations so he can focus wholly on his next steps: applying for medical schools and completing the Department of Anthropology’s Medicine, Science, and Technology Studies (MSTS) program. He will be busier than ever, but he’s thrilled to be participating in the graduate degree program.

“The curriculum looks really fun and amazing,” he says. “The process of applying to medical schools takes about a year between interviewing and secondary applications, and in that gap year while waiting to hear back I didn’t want to be doing nothing. So I thought about this months in advance and I decided I wanted to further my anthropological studies.”

Looking even further into the future, Azadian has big plans to effect change in the medical field. And he wants to start by shifting the way doctors look at their work from the very beginning of their training.

“What’s the point of understanding how a certain drug works if that drug can’t even be used by 99% of the population because of socioeconomic disadvantages?” he asks. “What’s the point of doing all this research if you don’t know who it’s going to help? That was always an issue for me. I want to try to shift the way physicians are taught from the inside.”

To do that, he hopes to find a career in an academic or governmental capacity—perhaps as the vice president of health affairs for the UC system, or on the State of California’s Health Board, he says.

“I want to go into a line of medicine where I can oversee systems of health, and I think that in order to enact change you have to be somewhere like that,” he says.

That change he wants to bring about is toward a more anthropological approach to medicine and getting more physicians to contemplate the “why” of their actions. And wherever he ends up, he knows he will be bringing all the knowledge and consciousness that he gained from his time in the social sciences.

“Being an anthropology major is going to craft me to be a more well-rounded physician. I feel that already.”