An alumna and advocate 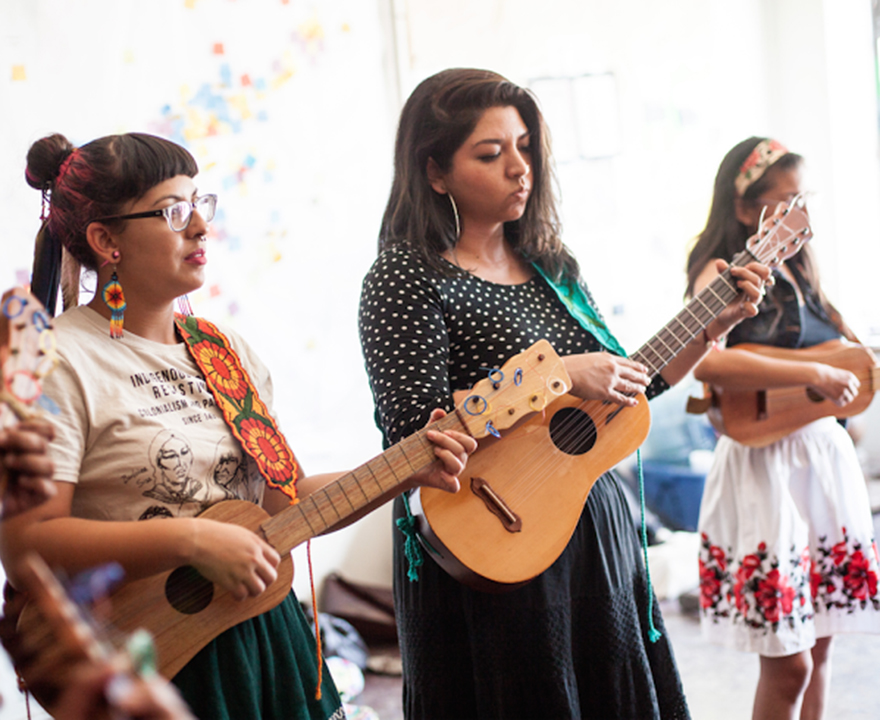 An alumna and advocate


Franchesca Ocasio admits that her reasons for coming to UCI as an undergrad were not what one would call purely academic. The California native and current foster youth liaison for the Pasadena Unified School District had moved to Chicago as a teenager, and she saw college as the perfect opportunity to come back to the friends and family she had left behind upon her move to the Midwest.

“Of course, UCI’s reputation as a leading research institution didn’t hurt,” she says.

As a freshman, Ocasio declared herself a biology major, planning on a potential future as a veterinarian. However after taking a Chicano studies class for fun, she realized the passion that she had for the subject. She became involved in student organizations such a M.E.Ch.A (Movimiento Estudiantil Chican@ de Azatlan), and felt like she had found a place she belonged.

“In M.E.Ch.A I found a second family and a love for education and community organizing,” she says. “When I found my community, I found a home, making my decision to attend UCI one of the best I’ve ever made.”

The organization soon brought her to other programs both on and off campus, such as UCI’s Raza Youth Conference, a day for Southern California high school students to explore UCI and participate in workshops; Mes de la Raza, a month-long series of cultural and political events; and La Escuelita, an after-school program for Santa Ana high school students. The more she connected with peers who shared similar cultures and interests, the more it became clear to her that science might not be the best field for her after all. Instead, she began to consider a career in education.

Still, she took her time deliberating before making the leap from biology to Chicano/Latino studies. It was a bold choice—one that went against her parents’ wishes—but Ocasio knew it was the right one for her. In her third year, she officially changed majors.

Having made the choice to pursue this degree, Ocasio fully immersed herself in the Chicano/Latino studies community. She counts the people she met there as some of her closest friends and mentors, and she is still involved with the Raza Youth Conference today. She also still performs as an Aztec dancer during UCI’s annual Dia de los Muertos celebration with fellow alumni.

It was—and still is—these outside the classroom activities that made the most lasting impact on Ocasio. She encourages current students to be proactive in both seeking out their own places in the campus community, and in taking advantage of the resources and information that are out there for students.

“I feel that my time at UCI prepared me for my current career, but partly because I took advantage of the opportunities to work outside of the classroom and to get to know some of my professors,” she says. “Many students don’t learn until it’s too late that doing well in class is only one aspect of a successful college career. I would advise graduating seniors to take advantage of as many opportunities they can find to assist in research on campus, as well as look for internship opportunities and get to know their professors if they haven’t already. Those connections will have more value than they can imagine once they leave college and begin looking for a job.”

For Ocasio, one such connection is Chicano/Latino studies’ director of undergraduate studies and associate professor, Ana Rosas.

“As a student in her class I felt that she pushed me to be the best academic I could be,” she says. “Her classes were tough. They forced us to read—which college students hate—and encouraged us to think critically. There are essays I wrote for her class that I continue to use as writing samples to this day. Not only is she a tough educator, in the best way, she is empathetic and caring. In the years since I graduated I have kept in touch with Professor Rosas and continue to feel supported and encouraged by her.”

These same traits—support, empathy, and caring—are vital in Ocasio’s role with the Pasadena Unified School District today. She currently serves as their foster youth liason, and works with foster children in the school system to ensure that they are succeeding academically. Conducting her work means collaborating with social workers, foster parents, group homes, and community partners.

But she didn’t know that she wanted to work with the foster children until she began working with the Children Youth and Family Collaborative a few years ago. As a youth education specialist, she served as a mentor and tutor for foster children at high school and elementary school campuses. The work was challenging, but it was apparent to Ocasio how much these kids needed an advocate.

“These are young people who have experienced many traumas and, for many of them, school is the only constant in their lives,” she says. “Oftentimes, foster youth’s history of trauma and inconsistency in multiple aspects of their lives make it difficult to do well in school and other areas of their lives. The overwhelming majority of these young people are Black, Latino and Native American youth, many of whom become homeless or incarcerated upon emancipation due to a lack to resources and access to employment and higher education. Through this work at CYFC I became passionate about being an advocate for foster youth rights and educational access.”

Recently she has been able to open foster youth resource centers at several campuses, which will soon be present at all schools in the Pasadena Unified School District. She hopes that these centers serve as a safe place for foster youth to go for information, community, and support.

She will be returning to school in the fall, beginning a master’s program in education, and hopes to continue working with foster youth at the district level. For her part, especially having seen the struggles of students in foster care, she doesn’t take the opportunity to receive an education for granted. She hopes that recent graduates will keep this in mind as well.

“Don’t forget where you came from,” she says. “Remember that obtaining a college degree is a huge privilege that many before you had to fight for. It’s our responsibility to continue that legacy by taking the knowledge we gain from a college education back to our communities to give back and help others.”