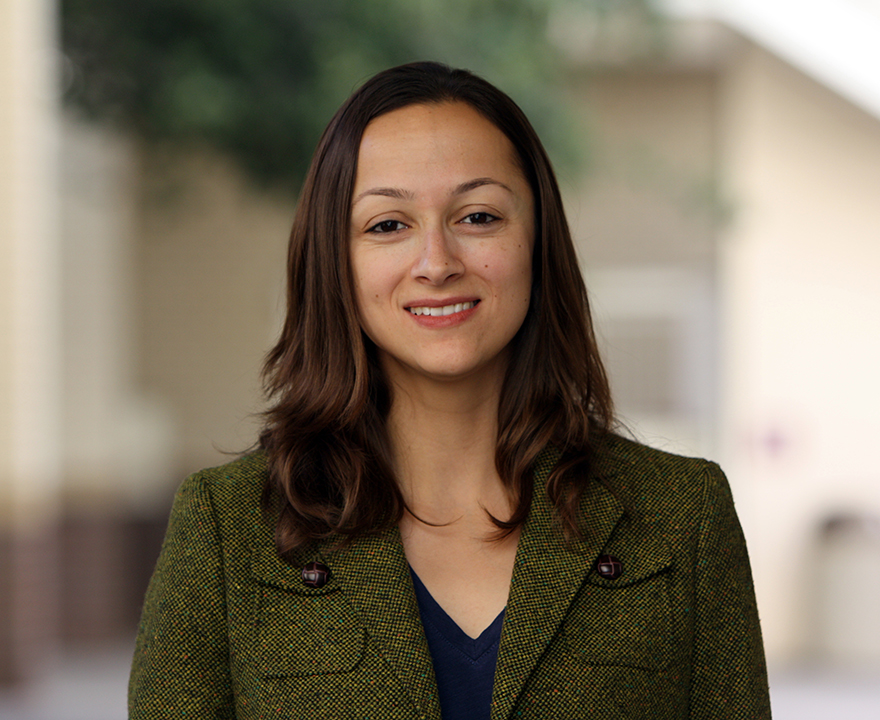 
Among the awards offered at the university level, one of the most distinguished and celebrated is the UCI Alumni Association’s Lauds and Laurels Awards. Comprised of 18 individual honors for staff, faculty, students and alumni, the Lauds and Laurels have been celebrated for 46 years now. Among this year’s recipients are three representatives from the School of Social Sciences, including Outstanding Graduate Student Dana Moss.

Moss—whose hard work and dedication to her studies made her an obvious candidate for the award—comes from a unique academic path. She grew up outside of Washington D.C. and completed her B.A. at Loyola College (now Loyola University) in Baltimore. After earning her bachelor’s, she moved to Philadelphia with her future husband and began working as a research associate in the Department of Sociology at Villanova University.

“It was a really great position because I got to learn a lot about the day to day of being a sociologist through the lens of a staff support person,” she says.

It was during this job that Moss was presented with the opportunity of earning her M.A. from Villanova. Because they did not offer a sociology graduate program—her first choice—she decided instead to work toward her master’s in liberal studies, which allows the student to design their own multidisciplinary degree. Villanova has a number of faculty whose research focuses on Middle Eastern politics and history, and Moss found herself drawn to the discipline due to her budding interests in the region.

In fact, she became so interested in the culture and history of the Middle East that she and her husband took an extended trip to Yemen to study Arabic in 2009. This eventually led to their co-founding of the Yemen Peace Project—an organization dedicated to advocating on issues of U.S. foreign policy toward Yemen, and promoting awareness about the country through films and art—that her husband, Will Picard, still runs today.

Upon the completion of her first master’s, Moss decided to continue on to earn her M.A. and Ph.D. in sociology, focusing on social movements in the Middle Eastern region.

“I studied stratification and social problems as an undergrad and found it to be extremely depressing,” she says. “It’s very hard, day in and day out, to grapple with issues of systemic inequality, sexism, and racism. So I decided that I wanted to understand how people contest their circumstances and try to change them.”

Upon her acceptance into top graduate programs across the country, she carefully examined each one and concluded that the best place to do such research was UCI.

“I believe that UCI has the best program in the study of social movements out of anywhere,” Moss says. “There are 14 faculty members who study social movements in one form or another in the department, and that’s just unprecedented.”

So she and her husband made the long trek from Philadelphia to Southern California with dogs in tow—a decision she couldn’t be happier with.

Moss has certainly made the most of her six years here. She has earned nearly 20 fellowships and awards in that time and is a self-described workaholic. But she believes the effort has been worthwhile, and she is making an impact with her work already. Her current research—which earned her the National Science Foundation’s Doctoral Dissertation Improvement Grant and the Department of Sociology’s Outstanding Research Award—examines the role that diasporas played in the Arab Spring revolutions of 2011. Specifically, her work compares the mobilization of Libyan, Yemeni and Syrian diasporas in the U.S. and Great Britain.

She’s been published in several peer-reviewed journals to date, with several articles forthcoming and additional works being published in places like The Washington Post. In 2014, her co-authored article with Distinguished Professor of sociology David Snow was published in the American Sociological Review, and—that same year–she was published in Mobilization: An International Quarterly, the leading journal in the study of social movements. Recently, an article she wrote addressing the reluctance of Middle Eastern diasporas to speak out against dictatorships in their home countries (for fear of retaliation against their families back home) was accepted into the sociological journal Social Problems, a top generalist journal in the field.

She’s hopeful that by getting her findings published, they will be able to play some role in bringing under-studied social dynamics to light. .

“I really hope my work is interesting to other sociologists and raises some provocative questions,” she says.  “I was just contacted by researchers in Canada who want to help Syrian refugees and had found one of my papers; they want me to discuss policy implications with them and how they can apply some of these ideas to assist Syrian refugees in Canada. That is a sociologist’s dream; that anybody in the policy realm will actually read our research and find something useful in it.”

One would think that between finishing her dissertation and publishing that Moss would be fully booked, but she still makes time to present her work at conferences around the world. She recently presented her findings at the International Studies Association Annual Meeting in Atlanta, and last fall she traveled to the University of Amsterdam to speak on the Syrian regime’s online surveillance and counter-mobilization during the revolution.

It’s not always easy to juggle the responsibilities of a Ph.D. student, but Moss makes it work, in part thanks to the support of the UCI staff and faculty.

“First and foremost I credit my advisor, David Snow,” she says of her faculty advisor and co-author. “He’s an incredible mentor. He encourages his students to develop their own individual identity as sociologists, but he will still mentor them every step of the way and do everything he can to help them to be successful. He’s genuinely interested in helping his students to discover their own sociological voice.”

She also recognizes fellow Lauds and Laurels recipient, Graduate Student Director John Sommerhauser, for his contributions to the School of Social Sciences as a whole.

“He not only has to keep tabs on all of us graduate students in multiple departments, but he does so with grace and with professionalism,” she says. “He has an incredible amount of responsibility and I recognize how hard he works. I just can’t think of a staff person who is more deserving than John.”

In addition, Moss is profoundly appreciative of the support of her dissertation committee—David Meyer, Charles Ragin, Judy Stepan-Norris, and Yang Su— whom she says she can go to with any problem whenever she needs guidance.

“They’re just wonderfully supportive of me, and they’re tremendous advocates for their students in general,” she says.

The esteem to which she holds her committee members makes being nominated for the Lauds and Laurels that much more meaningful to Moss. She recalls not only feeling honored upon learning that they chose to put her name in for consideration, but also appreciative that they have helped her achieve a level of success that has enabled her to pursue a career in academia. Thanks to much preparation on her part and the support of her mentors, she will be joining the faculty at the University of Pittsburgh this fall as an assistant professor in the Department of Sociology.

As her time at UCI comes to a close, Moss is still hard at work, but she is also taking time to appreciate where that hard work has gotten her—both in terms of awards and her new faculty position at an acclaimed university.

“My joke with my family is that receiving the Outstanding Graduate Student Award made all those weekends that I did not go to the beach worth it,” she says. “I’ve tried to pour every single thing that I can into getting this degree and doing it well, and it really is very nice to be recognized.”

Moss will be presented with her award at the Lauds and Laurels Awards Ceremony on May 12 along with the other recipients. Additional School of Social Sciences honorees include social science graduate student director John Sommerhauser and current U.S. ambassador to Ukraine and social science alumnus Geoffrey Pyatt.