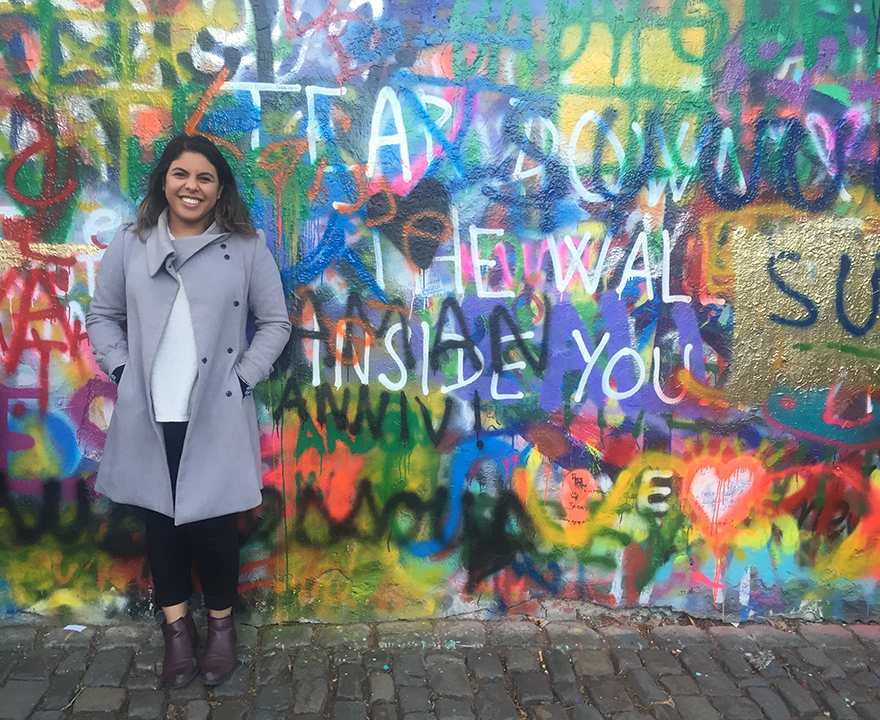 When asked what the takeaway from her upcoming commencement address will be, Aliza Asad has a simple yet profound answer.

“Take comfort in discomfort,” she says. “It’s an important step to using your perspective and identity to create some sort of meaningful impact on someone.”

The international studies and public health policy double major has faced her fair share of challenging situations, including a move from Colorado to Anaheim Hills, CA halfway through her high school career. But she firmly believes that experiences like these have made her a more well-rounded and compassionate person. That’s why in her commencement address—to be given at the 12:30 p.m. social sciences graduation ceremony on Friday, June 10—she hopes to inspire her peers to embrace a little discomfort in their lives.

In fact, Asad’s entire first year at UCI could be described as one long, uncomfortable situation. She admits that when she arrived on campus, she was reluctant to make friends, join any clubs or campus organizations, or really step out of her comfort zone at all—much like how she handled transferring high school a couple years before.

“As a high school student everyone tells you that college is so fun and it’s the best years of your life—and in hindsight I can say that—but coming in it’s a hard transition,” she explains. “College campuses can take a little bit of exploration in order for you to find your niche. I don’t think you can just come in and say ‘this is it, this is where I belong.’ There has to be some amount of trial and error that has to go into that.”

For Asad, the searching paid off in her second year at UCI when she discovered several groups that helped mold her into the person she is today. The first was New U, UCI’s on-campus, student-run newspaper. She loved that it offered her a space to express herself through written word. And since she had luck with this new group, she was open to branching out even further.

“I loved that I was able to take what I was learning at UCI and really apply it somewhere where it had a tangible impact,” she shares. “You can see the kids start to ask questions and get really interested in these topics throughout the year, and I don’t think that’s something you get to see all the time. It’s really rewarding to see that what you’re doing actually impacts someone.

Around the same time that she joined Global Connect, Asad’s resident advisor brought her to an Olive Tree Initiative (OTI) meeting. She felt at home almost immediately.

“I walked in and thought, ‘this is it,’” she says. “I liked the environment, I liked the people—I felt like I always knew these people existed but I didn’t know where. And then there they were in that exact room.”

With her new group, Asad truly came into her own. She became co-president of OTI during her third year, and traveled to Israel and the West Bank as part of the organization’s experiential education program. She also had the opportunity to guest lecture in one of political science associate professor Daniel Brunstetter’s upper division international studies classes, where she presented information on the militant group Boko Haram.

Opportunities like those—where she was able to practically apply what she had been learning about in the real world—were her most valued experiences as an undergrad.

“It gave me a lot more motivation,” she says. “It made me realize that what I do in the classroom doesn’t have to stay there. It’s something I can actually materialize and take with me and impact people in different spaces. Whether it’s the people I met in the Middle East on the trip with OTI or if it’s the high school kids I teach through Global Connect or through the writing of a paper.”

The challenge though, she notes, is that reaching for these opportunities takes quite a bit of courage in itself. Failure and disappointment are distinct possibilities, and many people would rather shy away from these situations than take that risk, experience that discomfort.

She cites the moment Brunstetter asked her to guest lecture as an example. She was shocked and honored, but also felt a wave of self-doubt approach.

It would have been easier to turn him down than to deal with the stress leading up to her moment at the front of the classroom, but Asad decided to let the request expand her thinking: Maybe she was qualified after all.

“It’s through opportunities like that, where I was given things that I thought were far beyond my potential, that I started to believe that maybe these things are really achievable if I put in the effort and push myself,” she says. “If you don’t challenge yourself and make connections, then why are we here? That’s what gives meaning to things.”

Asad was finally able to challenge herself in a real-world scenario during the fall quarter of her senior year. She spent that time studying abroad in Istanbul, and the experience ended up being a defining moment of her college career.

Aside from the expected discomfort of being in a new country with unfamiliar cultures, the language barrier in particular was a struggle. For instance, though it was an English-speaking program, the other students and instructors did not speak English outside the classroom.

“I had—kind of arrogantly—expected that they would speak my language,” she says. “Instead, I had to accommodate them as opposed to the other way around.”

But she was able to adapt, and found value in the challenge.

“It was just such a personally enriching experience. It was sort of a test. It forced me to learn to adapt to a new situation and being able to trust myself to figure it out.”

Asad gives major credit to the School of Social Sciences faculty and staff for making her UCI career challenging in a way that prepared her for life beyond graduation. Along with Brunstetter, she calls out Daniel Wehrenfennig, executive director of OTI, and Jessica Chan, the director of Global Connect. In fact, she might not be speaking at commencement at all if not for Chan, who encouraged her to submit her application when Asad began to question herself.

“I think it’s because of a lot of the relationships I’ve had with faculty and program directors and peers that I’ve been able to recognize what I have the potential to do. That as opposed to gliding through, I have the ability to really achieve something.”

And that is precisely the sentiment she hopes to convey in her commencement address; that the challenges graduates may face should not be seen as roadblocks, but as opportunities to grow. And that a little discomfort can be a huge stepping-stone.

For herself, Asad isn’t quite sure what the future holds yet. Graduate school is on the table, but she would love to take a few years off to work and travel first. She also wants to take some time to decide how her degrees with play into her future career.

“That’s what’s hard is that I am a double major in international studies and public health policy,” she explains. “They have the potential to merge, but at the same time I have to choose a direction to take. In the future I see myself pursuing healthcare administration, but maybe later on branching out to global health.”

She will no doubt arrive at a decision the same way she became co-president of OTI, a guest lecturer at a prestigious university, and her class commencement speaker; with some hard work, a little nudge from friends, and the thought that maybe comfort is overrated after all.