Ben Feintzeig to be assistant professor at University of Washington 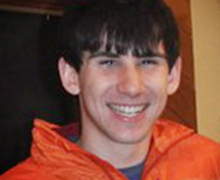 Ben Feintzeig to be assistant professor at University of Washington


Ben Feintzeig, currently finishing his fifth year in LPS, has accepted an offer to join the faculty at the University of Washington as an Assistant Professor of Philosophy in Fall 2016. Ben's primary area of research is the philosophy of physics. His dissertation, which was supervised by LPS Associate Professor James Weatherall, concerns a number of conceptual problems in the foundations of quantum field theory. Through a series of new mathematical results and arguments concerning the proper interpretation of the relevant formalism, Ben clarifies how the understand the relationship between quantum theories and their classical counterparts. Along the way, he shows that an attractive interpretive option, known as "algebraic imperialism", can avoid some of the most significant problems philosophers have identified with it. Congratulations, Ben!