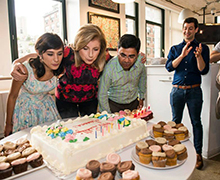 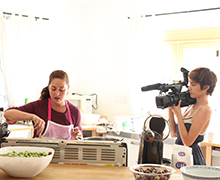 The UCI graduate, who now spends her days (and often nights) creating video content and graphics for The Huffington Post, was even voted ‘Most Opinionated’ in her Yorba Linda high school’s graduating class.

“I was always politically active in high school,” she says. “I wrote for the school newspaper, I was in the debate program, I started the Model United Nations club at my high school, and I was always involved in current events and politics really early on. I was super Goth and I hated the establishment—I was kind of a weird kid.”

Weird though she may have felt, Chiaramonte’s steadfast approach to life’s various social issues made her quite the student, and an excellent candidate for any college she had her heart set on. The problem was, her longtime dream to study journalism was somewhat squashed when the industry took a downward turn in the early 2000s. Instead, her parents nudged her toward law school, and UCI seemed like a great starting point.

She went through the motions completing pre-law courses her first year, but she couldn’t ignore the itch to join the journalism world. 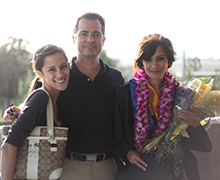 “Law seemed like a fair compromise with my parents, because I could still be involved in politics somehow, but I could never really kick the fact that I wanted to work in media,” she says. “So I secretly started taking the media classes offered in the political science department.”

After that first class, a religion and media course offered by former lecturer and alumnus Bill Lobdell, ’82, she was officially hooked—despite being told by Lobdell that journalism was an especially risky career choice. She let her parents believe that she was still interested in a law degree, while in reality she was taking courses from faculty members like Lobdell, lecturer Ricardo Chavira, and associate professor Daniel Brunstetter focused on broader topics. She joined UCI’s Model United Nations group, which allowed her to travel to Europe and Washington, D.C., and completed the Middle Eastern studies certificate program.

Having access to so many disciplines all under the social science umbrella, Chiaramonte was in academic heaven. She worked hard to absorb as much information as possible, and says that the multi-disciplinary approach she took while at UCI was instrumental in her success later on in both grad school and the work force.

“Professor Brunstetter really helped me conceptualize that there is a lot more out there than just Orange County and how important it is to think about things in a bigger space,” she says. “When I think back to UC Irvine, the classes I remember the best and most fondly are his because he really got me to think outside of the box.” 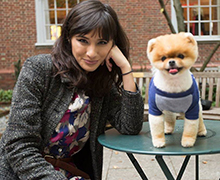 As graduation approached and her love of journalism continued to grow, Chiaramonte knew that it was almost time to drop the law school façade. She sat for her LSATs—her parents had been sending her to prep classes—but came clean to her parents soon after.

“It was very hard for my dad to hear that I had been lying to him for four years,” she says. “He was mad.”

Though she admits to feeling bad about lying to her parents, she was confident in her decision to pursue a path in journalism. She decided to take a year off after graduating from UCI to hone her skills in graphic design at a local community college, and it wasn’t long before she was admitted into the graduate program in broadcast journalism at USC’s Annenberg School for Communication and Journalism. It was there that she realized just how well UCI had prepared her when she saw some of the courses fellow students were taking.

“A lot of my fellow grad students were taking classes around political reporting and world theory, but I felt like I got a great understanding of all of that at UC Irvine and I was really far ahead of everyone else,” she explains. “I also had a thorough understanding of complex Middle Eastern conflicts because UCI had such a great Middle Eastern studies program that really prepped me in a way that a lot of people didn’t get. So having that background from UC Irvine allowed me to focus on the video and graphic design courses.”

Such classes led her to a very successful internship at Yahoo, writing stories and creating visually engaging slideshows to be featured on their homepage. When her stories started to break millions of views, the team decided to hire her on full-time—before she had even finished her master’s degree.

After cutting her teeth at Yahoo for a while, she accepted a gig designing graphics for The Advocate and Out Magazine, but it was a mere six months before her work there caught the attention of The Huffington Post.

The online news juggernaut offered her a six-month fellowship that would require two months of training in its New York City offices. It was a risk, but the 25-year-old figured that there was no better time than the present.

“I had always wanted to work somewhere like The Huffington Post,” Chiaramonte says. “So I took the risk and I took this crazy fellowship even though I had been working full time and there was no promise of a long-term position after my contract was up.”

With no guarantee of a job once her fellowship was over, she threw herself into the work, hoping to impress her new employer. She became the brand’s first social graphics editor, cultivating its Tumblr presence and building graphics and quote cards for breaking news stories from the Huff Post’s Los Angeles offices. She loved it from the very beginning, and her work spoke for itself.

As the end of her fellowship approached, Chiaramonte met Arianna Huffington while photographing a book-signing event in Los Angeles. As they said goodbye, she thanked the startup guru for the invaluable opportunity. But Huffington took her by surprise.

“She said, ‘I need you to move to New York and work for my team,” Chiaramonte shares. “Arianna’s assistant just looked at me and said, ‘you should say yes.’”

The next thing Chiaramonte knew, she had two months to get her affairs in order and make the move across the country—something she never thought she’d do.

“I never thought that I would move to New York,” she admits. “I think California is the greatest state—it’s always going to be home—but sometimes opportunity comes calling and you kind of have to take that risk.”

So far she’s been thrilled with the choice she made. She was able to transition from graphic design to video editing—her true passion—eight months ago, and creates video shorts on topics ranging from recipes to makeup tips to sexism and catcalling at comic book conventions. She loves the variety of topics she works on and the creative freedom the job allows her, and she especially loves being at the center of breaking news. She says that the day the Supreme Court overturned Proposition 8 was one of the most exciting days on the job.

“To be in the newsroom with people that had been so dedicated to this major historical event was so exciting,” she says. “Someone from the Queer Voices team got pink Champagne and sprayed it over everyone. And as I’m building graphic after graphic about this very thing they’re celebrating, it’s happening around me and I’m experiencing history and being a part of it in a very real way—I wouldn’t trade it for anything.”

Though she may be settling in to her role in the working world, Chiaramonte continues to utilize the education that she received at UCI. Even the classes she disliked as an undergrad have proven to be essential.

“I hated that one year of statistics I had to take as an undergrad,” she admits. “But now, stats is something I use in my job more than anyone. Everyday I have a huge dashboard open with social media analytics to see what performs best, what’s trending, etc. to see what I’m going to do for the next video I make to make it go viral. That one year of social science stats is something I use every day.”

She also credits the Model United Nations program for honing her public speaking skills and her political science professors for pushing her to change how she thinks about world issues. But she learned more than just practical skills during her time at UCI.

Having the experience of following a path she wasn’t passionate about made her want to work that much harder once she discovered journalism, and that experience is what continues to motivate her today.

“When I was pursuing law, I did the bare minimum in terms of effort,” she explains. “And I was fine with it. It wasn’t that I was dumb or that I didn’t like it, I just didn’t love it. And in doing what I didn’t love, I kind of—in a weird way—discovered what I really wanted.”

“What motivates me now to do above and beyond and stay in the office until 8 p.m. a lot of nights is just that I love it. I tried to run from that and make my parents happy, but even when I was at UCI I was carving out a major for myself that didn’t exist yet because in my heart of hearts I knew I wanted to work in media. So now I try to do everything I can to put out work that I am proud of and that reflects how much I love the industry I work in.”

Chiaramonte plans to continue with her career in video production and hopes to be at the forefront of the newest trends in the industry, eventually directing a team and producing videos on a larger scale. Whether that means for television, documentaries, or some yet-to-come medium, she doesn’t know, but the UCI family can expect to see her name in the main credits before too long. After all, when this Anteater wants something, she finds a way to make it happen.