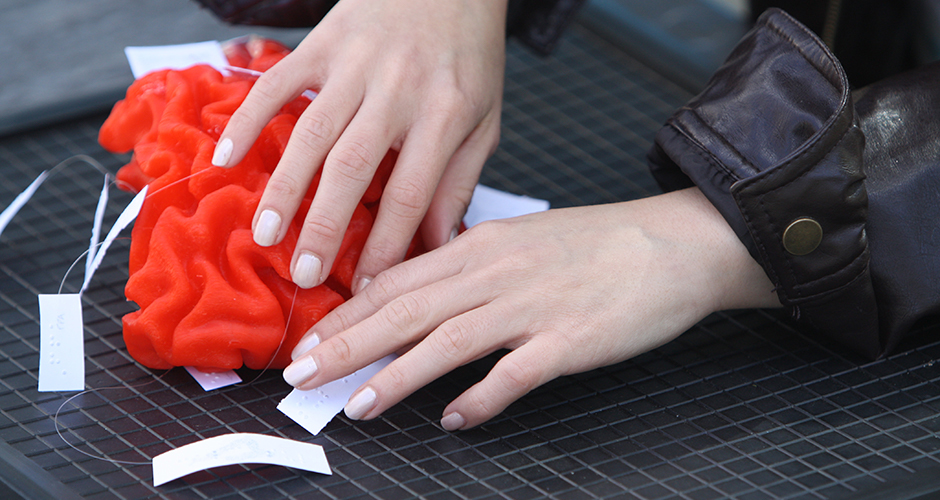 Graduate student Karen Arcos explored the UCI campus extensively before she arrived for her first quarter in the Department of Cognitive Sciences. She learned walking routes to labs and classrooms, and became familiar with identifying landmarks around campus—she even learned train travel. Many incoming students adopt a more casual, ‘I’ll figure it out’ attitude, but for Arcos—who is totally blind—that wasn’t an option.

The National Science Foundation Graduate Research Fellow has faced many challenges to get to where she is today—that is, completing a prestigious Ph.D. program with a nationally renown fellowship under her belt. So taking these extra steps to prepare for her arrival at UCI was nothing out of the ordinary. Her research proposal to the NSF tackles one such challenge in particular—the decline of braille usage among the visually impaired.

According to Arcos, research shows that when a person reads using braille, the area of the brain that activates when sighted people read print—the visual cortex—activates in non-sighted readers as well. She would like to find out what this means for reading comprehension, and as a first step, she seeks to understand how working memory ability varies among braille readers and non-braille readers. “Braille is starting to die out, and a lot of people see screen readers as the way to go in terms of reading information because it’s a lot faster,” Arcos says. “But if you’re just listening to text all day, how are you going to learn spelling or punctuation? How will you learn where the top of the page is relative to the bottom, or even what indenting is? You can’t understand spatial layout through listening in the way that braille offers.”

As Arcos relies on a strategic combination of screen readers and braille for everything from schoolwork to getting directions, she’s found the diminishment of braille resources to be troubling. She hopes that through this proposed research—utilizing fMRI to determine how reading comprehension is affected by the medium used—she can justify more focus on braille education.

“I propose to do research looking at how people comprehend information depending on the environment they’re placed in,” she says. “When you’re visually impaired, you access information in different ways. Whether it be a human reader—like having a friend read a restaurant menu to you; versus reading with a screen reader; versus reading in braille; versus reading in large print if you have some vision. I want to look at how reading mediums affect your long-term comprehension.”

To aid her in her quest for answers, Arcos’ faculty advisor Emily Grossman, cognitive sciences professor, secured a UCI ADVANCE Spirit Grant, which will fund the development of computing tools to make brain imaging data analytic software—essential for Arcos’ research—accessible to the visually impaired. In fact, Arcos is incredibly grateful for just how encouraging Grossman and the Disability Services Center staff at UCI have been. “I went from hearing all these no’s [from other schools] to her saying ‘Oh, I’ve never worked with blind people before, but your research sounds so interesting, let’s talk about it,’” Arcos says of Grossman. “She was really enthusiastic from the get go, which is what I was looking for—supportive faculty."

This support has been especially welcome considering that Arcos has strived to prove her capabilities since elementary school. Actually, she’s been fighting the odds since birth.

Arcos was born several months premature in a country unfamiliar to her mother, who was visiting from Colombia. Delivered at only 23 weeks, it was unclear at first whether the infant would even survive. She had quite a fight ahead of her, but after being hospitalized for three months, Arcos was finally strong enough to enter the real world.

It wasn’t long before her mother realized that the baby wasn’t responding to visuals. Doctors confirmed that both Arcos’ retinas were detached, and she had only light perception.

“I was the first in the family to have something like this happen, so my mother had no idea what to do, where to go, or how to seek help,” Arcos says. “She was a first-time mom, and to raise a child that has a disability in a foreign country with only some understanding of English is even more challenging. She’s my lifesaver—both my parents are.”

The family found support and resources at the nonprofit Blind Children’s Center in Los Angeles. There, six-month-old Arcos and her family learned how to manage life without sight—and she volunteers there to this day.

Arcos doesn’t sugar coat the fact that being visually impaired in a sighted world is difficult, but the staff at the Blind Children’s Center always stressed that she didn’t have to change her goals just because she couldn’t see. After graduating from the Center at age five, Karen learned braille at a special public school for the blind, followed by mainstreaming to elementary school. Here, she hit one of her first big hurdles when the new school was hesitant to test Arcos for Gifted and Talented Education, claiming it would be difficult for her to keep up with the advanced course load. But Arcos and her parents pushed back. It paid off, and she participated in accelerated coursework through high school.

Having her parents in her corner as advocates taught Arcos to fight for herself, and not to take ‘no’ for an answer. This perseverance came in handy when, as a high school student, she once again had her abilities questioned by school authority figures. This time, they suggested that her goal of going to a four-year university was not advisable.

“The special education transition staff, who are meant to help students with disabilities find resources for after high school, were hesitant, too,” she says. “They encouraged me to attend community college or an independent living skills center because they were concerned that being on my own at a university would be too difficult.”

Arcos had always wanted to go to a four-year college, so these attitudes were discouraging.

“When I was growing up, my parents would ask me ‘where are you going?’ and I would have to fill in the blank—first preschool, then elementary school, then middle school, high school and, finally, university.”

So, instead of accepting their suggestions, she applied to QuestBridge National College Match, a program that helps high-achieving, low-income high school students acquire four-year scholarships to some of the nation’s top universities. This decision led her to accept a four-year scholarship to the University of Southern California.

“I think I’ve learned resilience and perseverance because of all the no’s I’ve heard,” she says. “And creativity—I’ve learned to think outside the box to find solutions to difficulties that others might not have.”

This knack for finding solutions led to her research interests as an undergrad and as a McNair Scholar. It was at USC, while studying psychology and Spanish, that the newly-minted Trojan noticed the lack of visually impaired students and faculty on campus: Arcos was one of only four students, the only female, and the only braille reader. This knowledge, coupled with her continued volunteer work at the Blind Children’s Center and co-founding of a support group—Survive or Thrive—to help students with disabilities and their families plan post high school goals, brought her to the question of why braille was becoming extinct.

“Part of what got me interested in the topic is that it’s under-researched in the first place,” Arcos says. “From the literature I’ve read, studies mainly address reading fluency rather than retention or comprehension. In addition, the number of participants in the research is not very high. It comes back to us being such a small population. According to the Department of Education, blind students comprise less than half of one percent of the school-aged population nationwide. And of that small percentage, ninety percent do not read braille. If you imagined that with print, where would society be?”

As she approached commencement, Arcos proposed her research to graduate programs across the country—and received plenty of rejections. Instead of getting discouraged, however, she kept trying and, again, her persistence paid off—she impressed faculty at both UCI and Harvard. Though she was tempted by the allure of the Ivy League, ultimately it was Grossman and UCI that made the biggest impact on her.

Now, Arcos is focusing on finishing her first year on campus on a high note and finding her groove with the workload. She is also calculating just how she will utilize the $46,000 grant from NSF.

In addition, she stays plenty busy outside of academics, having recently completed her 18th 5K as part of the LA Marathon in benefit of the Blind Children’s Center, and advocating for an amendment to the Americans with Disabilities Act to make online information accessible to people with disabilities.

Obstacles or not, it’s clear that no matter where this Anteater is, she will be championing for change.