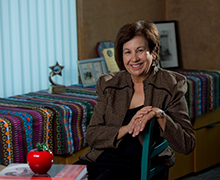 An expert in 20th century U.S. history, Ruiz has dedicated much of her nearly 40-year academic career to reclaiming the stories of Latinas who have fought for civil and labor rights.

“We all know stories about neighborhood women, but if you look at the panorama of their experiences, their names are often hidden in organizational minutes, in government documents, in diaries, in newspapers,” Ruiz said. “Once their stories emerge, you get a sense of their quiet courage.”

In 2012, Ruiz was elected a fellow of the American Academy of Arts & Sciences, and in 2013, she was named Distinguished Professor of history and Chicano/Latino studies at UCI, an honor considered the campus’s highest for faculty. In May 2015, UCI’s Alumni Association bestowed upon her the Lauds & Laurel Faculty Achievement award and in September that same year, she received the National Humanities Medal from President Barack Obama at a formal White House ceremony.

The first in her family to earn an advanced degree, Ruiz joined the UCI faculty in 2001 and was named dean of humanities in 2008. She completed her term in 2012 and now chairs the Department of Chicano/Latino Studies in the School of Social Sciences.

“Vicki Ruiz has served the Western History Association formally through her service on the Western Historical Quarterly Editorial Board and the WHA Council, and even more through her outstanding leadership in the field of Latino/a history and in the historical profession. Her stature as a scholar of Latina history and the histories of women of color is unrivaled; her extensive publications includes Cannery Women, Cannery Lives; Unequal Sisters; Latinas in the United States: A (3 vol.) Historical Encyclopedia; From Out of the Shadows; Latina Legacies; and Memories and Migrations: Mapping Boricua and Chicana Histories. Her service as President of the Organization of American Historians and of the American Historical Association has enhanced the national prominence of Latino/a histories and of inclusive western histories. Less visible, but equally essential, have been her long decades of professional leadership, advocacy, and administration establishing the academic resources for these fields, and the energy she has devoted to supporting her colleagues and teaching and guiding the next generations of western historians.”