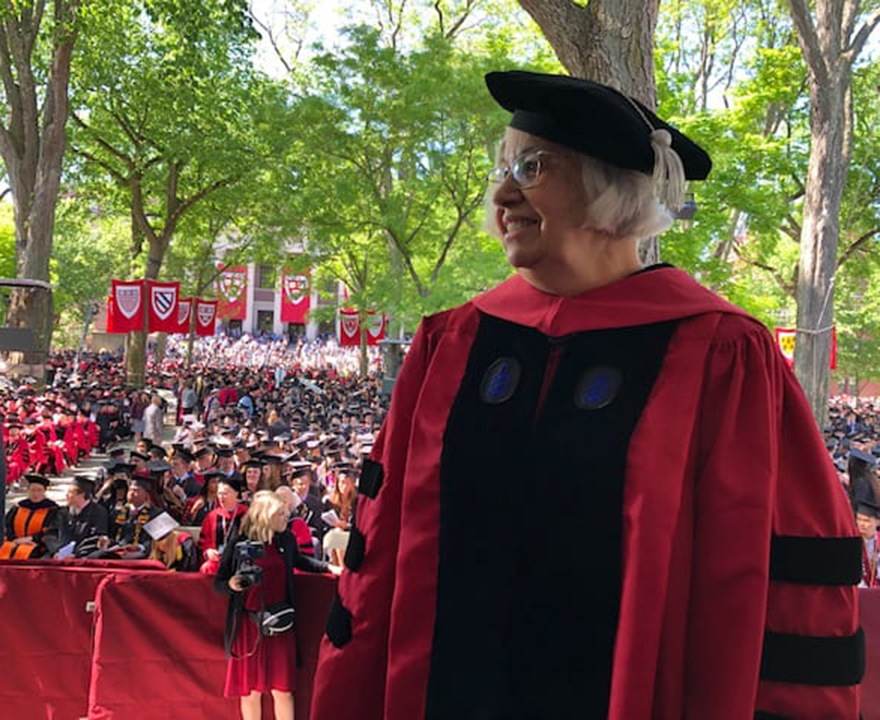 
Harvard University held its first in-person commencement since 2019 – and 371st overall – on May 26 at Tercentenary Theatre. And attending on stage was UCI’s Vicki Ruiz, Distinguished Professor emerita of history and Chicano/Latino studies, to receive an honorary degree, joining an eminent group of seven honorands from around the globe.

With over three decades of scholarship, research and instruction in Latino/a history, Ruiz is widely heralded as a preeminent historian of U.S. Latinas. The title of Ruiz’s honorary degree from Harvard is Doctor of Laws and the citation that accompanies it reads: “Fabled founding mother of Latina studies, weaving spirit threads of memory into tapestries of tenacity; she draws stories of food workers, field hands, and flappers from out of the shadows and into the light.”

“I consider this thrilling, and totally unexpected, honor a recognition of Latina history as a field, not just me as an individual,” said Ruiz, who served as dean of UCI’s School of Humanities from 2007-2012.

It’s the latest recognition in a highly decorated career. Elected in 2012 to the American Academy of Arts and Sciences, Ruiz received the 2014 National Humanities Medal for her “contributions as a historian.” In a sentiment similar to that of Harvard, the White House citation reads that Ruiz “pioneered the history of twentieth-century Latinas in a distinguished career that began with collecting oral testimony from Mexican immigrants who worked in U.S. canning factories.”

When Ruiz graduated from Stanford University in 1982, she became the fourth Mexican-American woman to receive a doctorate in history in the United States. Ruiz’s books include Cannery Women, Cannery Lives: Mexican Women, Unionization, and the California Food Processing Industry, 1930-1950 and From Out of the Shadows: Mexican Women in Twentieth-Century America.

Ruiz and Virginia Sánchez Korrol co-edited the three-volume Latinas in the United States: A Historical Encyclopedia, which received a “Best in Reference” award from the New York Public Library in 2007. The first encyclopedia to chronicle contributions of Latinas in the United States contains close to 600 entries from over 230 unique sources. Ruiz has said it “represents a coming-of-age for the field.”