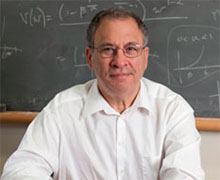 The National Medal of Science is the highest presidential honor bestowed upon individuals in science and engineering who have contributed to knowledge in the fields of physics, chemistry, mathematics, biology, behavioral and social sciences, and engineering.

Levin has held an IMBS visiting professorship for the past 10 winter quarters at UCI.

From The Daily Princetonian:

Professor of ecology and evolutionary biology Daniel Rubenstein said that Levin’s work involves trying to understand patterns in nature and how they come to be. Rubenstein explained that he has worked with Levin to research patterns in herds and flocks and the application of these patterns on a larger scale, adding that he has extended this work to problems associated with exchange, including how decisions about sharing and cooperating will shape an entire governance system and the resultant feedbacks of the landscape.

Levin said that his research centers on the advancement of basic science and the environment, noting that he is always seeking a partnership between basic and applied work.

What truly sets Levin’s research apart, however, is its multidisciplinary character, said Ramanan Laxminarayan, senior research scholar and lecturer at the University, as well as director of the Center for Disease Dynamics, Economics & Policy. Laxminarayan said he has worked with Levin on problems of managing the commons — technology that concerns how the actions of the few affect the welfare of the many — including antibiotic effectiveness as a shared resource and immunity as a public good.

“He works with the widest range of people that I can think of. It’s very unusual for an academic, and particularly an ecologist, to think that broadly, and that’s what makes his work so impactful,” Laxminarayan added.

Levin explained that he has never limited his thinking to disciplinary boundaries.

“I like to try to bring methods from whatever disciplines are appropriate to those problems, whether it be mathematics, or ecology, or evolutionary biology, or epidemiology, or economics and the social sciences,” he said.

Rubenstein said that Levin’s incisive mind and probing questions make him a wonderful collaborator, and that Levin has a way of organizing thinking in groups so that precise predictions emerge from the concepts and ideas that are discussed.

As a scholar and a teacher, Levin is genuine, generous and encouraging, but also immensely productive, Laxminarayan said.

“He truly is one of these very warm individuals who undoubtedly leaves an impact,” Laxminarayan added.

Levin cited the University as a major influence in his works and success. One of his primary reasons for joining the University faculty was the immense opportunity for partnerships, he said.

“The ability to do research and to mentor at the same time and to be mentored by my students has been wonderful, and Princeton has supported that,” Levin said.