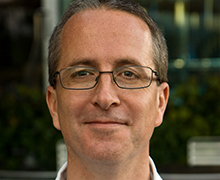 
Kai Wehmeier, UCI logic and philosophy of science professor and director of the Center for the Advancement of Logic, its Philosophy, History and Applications (C-ALPHA), has won a competitive fellowship from the National Endowment for the Humanities to re-examine conventional philosophical views on the logic, metaphysics and semantics of identity and necessity.

“My alternative theory dispenses with identity in the sense of a two-place relation that every object bears to itself, and to itself only, and proposes a more sophisticated conception of logical form for necessity statements that accounts, by way of explicit notation, for the distinction between indicative and non-indicative verb moods,” Wehmeier said.

“I expect that a number of prominent philosophical theses, many of which were first articulated by Saul Kripke in the 1970s, require substantial revision or become outright untenable when the background logical framework is modified in this way – including the necessity of identity, the existence of contingent a priori truths, and the principled non-synonymy of proper names with definite descriptions.”

Findings will contribute to a book-length study that combines philosophical, logical and linguistic approaches.

Wehmeier’s project is one of 295 recently announced studies that the NEH will be funding with more than $21.8 million. Learn more online: http://www.neh.gov/news/press-release/2015-12-14.