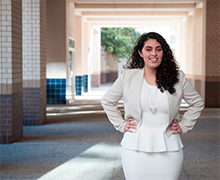 The current freshman in the School of Social Sciences’ business economics program watched as her peers coasted through those last few months of classes before heading off to college, but she remained hard at work at her Lawndale, CA high school developing a piece of jewelry that she believed could save lives. Fast-forward to October 2015, and her Guardian Locket—a necklace equipped with a panic button and GPS capabilities to alert the authorities in case of sexual assault—earned Sanchez the $25,000 first prize in the Network for Teaching Entrepreneurship’s (NFTE) 2015 National Youth Entrepreneurship Challenge.

Following her win, the budding entrepreneur was invited to visit the White House by the Office of Science & Technology Policy. On Nov. 25, with five other inspiring young entrepreneurs, she met President Obama in the Oval Office.

“Within the span of 24 hours I flew across the country and shook hands with one of the most influential political figures,” Sanchez says. “Those 24 hours were exhilarating and well worth all of the hard work. Being able to travel to Washington D.C. and meet the president was one of the most memorable experiences of my life.”

As exciting as this time is for Sanchez, the idea for her invention stemmed from a much darker place. She first realized the need for a product like the Guardian Locket when she found out that her best friend was raped during her first year of college. Seeing her loved one go through that pain and become distant and isolated made her want to take action.

“I remember when she told me what happened, I was so taken aback,” Sanchez says. “She’s such a strong person and seeing this woman that I look up to and knowing that happened to her—I felt very protective.”

Then her mother came forward to tell her about the time she had almost been sexually assaulted. She was able to escape, but the fact that her mom had been so close to that danger really resonated with Sanchez.

“I was so grateful that she was able to get away, but then I started thinking that not everyone is so lucky,” she says. “So I wanted to create something that would combat sexual assault in a discreet manner.”

The opportunity to turn that desire into a real company presented itself during Sanchez’s final year of high school. Her economics teacher tasked the senior students with creating their own businesses, a project that coincided with the writing of their senior theses. Sanchez decided to merge the two assignments, using her thesis to address sexual violence in the U.S. and how society tacitly encourages sexual violence against women.

“Not only do we see objectification of women everywhere (billboards, magazine covers), some of the most mainstream films today glorify abusive relationships,” she says. “This causes the viewer to normalize abuse. We need to begin showing the public that objectification and abuse is not ‘normal.’ We shouldn't be okay with the way that women and victims are portrayed in the media because when the public accepts this, they begin teaching their children to accept it and soon a whole generation becomes infected with this toxic mindset."

While she couldn’t change the thinking of an entire generation with one school paper, she still decided to use her economics project as an opportunity to actively tackle the issue.

Her solution was the Guardian Locket, a wearable and fashionable device that allows for quick and easy access in the case of an assault. Utilizing circuit boards hidden within the necklace, a single push of the button on the back of the locket sends the wearer a false phone call to potentially scare off an attacker. With another two clicks, the wearer’s exact location, photo, and other relevant information will be sent to local authorities and three emergency contacts.

Her invention demonstrates obvious advantages over products like pepper spray and Mace, which have been the only real options in self-defense available to college students.

“Not only is Mace illegal in California, New York, and other states, but there is a high likelihood that the person needing to defend themselves may get sprayed on accident,” Sanchez says.

In addition, a canister of pepper spray doesn’t easily fit in pockets or smaller clutch bags, and it can take awhile to find in a larger tote bag, wasting time that could make the difference between a close call and a tragedy. Alternately, the Guardian Locket is worn around the neck so it is always within reach.

The idea impressed Sanchez’s economics teacher, who encouraged her to enter the school-wide classroom competition where she took first place. From there, she went on to compete against other schools in the area, and after coming out on top in two more rounds of competition, she was granted the opportunity to take part in NFTE’s Startup Summer Program that aims to help low-income students develop entrepreneurial skills.

“All of the students in the program just worked on their businesses for about two months for up to eight hours a day,” she explains. “We were also paired up with mentors who they thought would be a good fit for our product.”

It was there that Sanchez was introduced to her business partner who had developed an app that worked well with Sanchez’s vision. Together the two prepared for the final round of competition in New York City, and on October 6—just a week after starting classes at UCI—she was on stage presenting her idea to a panel of business and technology experts. The panel was impressed by her idea and awarded her the $25,000 grand prize to use toward getting Guardian Locket up and running.

Since then, she has been planning out what the next year will look like for the business. Sanchez and her team will be spending the award funds over the next year to build up their inventory and develop the circuit boards that make the lockets functional. The hope is to launch just before the 2016 school year begins, and Sanchez plans on taking some design classes next quarter so that she can layout the lockets herself. Though the goal for the next year is to establish a line of lockets in different lengths, metals, and with interchangeable faces, Sanchez hopes to expand the line to include chunky bracelets, statement necklaces, and even watches for men.

“It’s not only a more convenient way to combat the rape culture, but it’s a fashion product as well,” she explains. “So it’s all-in-one really.”

With so much work to be done, Sanchez is thrilled to be at UCI where she receives encouragement and has access to helpful programs.

“UCI is a comfortable environment, but it still pushes its students toward success through its challenging curriculum,” she says. “The school also works with various organizations that benefit student entrepreneurs. They really help their students develop an entrepreneurial mindset."

Sanchez is taking full advantage of such facilities. Following her recent return from Washington D.C., she moved her workspace to Applied Innovation’s The Cove. The 31,000-square-foot facility is the hub of UCI’s efforts to collaborate with the larger economy, and it provides consultation for startups. Sanchez also has received help from the Blackstone LaunchPad—the student entrepreneur program with offices in the UCI Student Center.

Though it’s been a busy start to Sanchez’s college career, she says she wouldn’t have had it any other way.

“It’s been a difficult transition but it’s all worth it,” she says. “We live in a world where a person is raped every two minutes. And you don’t know who has been a victim because a lot of times people try to hold it in. If I can create this product and protect people, all of this extra work is nothing.”