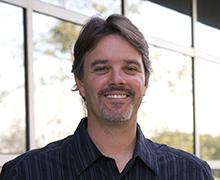 
Researchers from UCI, Arizona State University, Medical College of Wisconsin and the University of South Carolina have received a five year, $2,851,000 grant from the National Institutes of Health to expand research on a region of the brain linked to autism, schizophrenia, and stroke-induced aphasia. Called the planum temporale (PT), a human brain contains two; the left hemisphere PT tends to be slightly larger compared to the right hemisphere. The region is responsible for spatial hearing and auditory-motor control and aspects of musical ability.

Leading the research team is Gregory Hickok, cognitive sciences professor and director of UCI’s Center for Language Science. The study builds upon 15 years of work he’s done on this specific region using fMRI to map its organization.

“We learned what we could from fMRI and uncovered the internal organization of this region: it’s a patchwork of different functions rather than a catchall hub as others had proposed,” he says. The new grant brings his total funded work on the region to more than $12 million as the researchers home in on how stroke impacts three specific functions that occur within and around the PT. Below, Hickok explains the new research trajectory and how his team’s past findings are guiding them further toward results with both basic science and clinical translation implications.

Function 1: Hearing speech in noisy situations, like a busy restaurant
Hickok: “The auditory system has a mechanism for separating different streams of acoustic signals allowing us to attend to the person we are talking to while partially filtering out all the other noises and voices in a room. It does this, in part, using spatial cues: sounds coming from different locations are segregated by the brain into different streams. The PT region appears to be involved in this, according to our fMRI findings. With the new grant, we will study the effects of damage to the PT on spatial hearing, auditory stream segregation, and understanding speech in noisy environments. The work will tell us how much of an individual’s difficulty hearing speech in noise—a common complaint of many people—is a result of problems with a more basic spatial hearing deficit. This knowledge could lead to new approaches to alleviating difficulties with hearing speech in noise.“

Function 2: Audiovisual speech integration
Hickok: “Another source of information that the brain uses to segregate speech streams and aid speech processing in noisy environments comes from visual cues when people are talking. Our speech perception can improve dramatically in noisy environments if we can watch the talker’s mouth. In some cases, observed lip movements can even change what we hear when listening to speech. We know from functional imaging that a region near the PT is important for putting together auditory and visual speech signals. No one, however, has systematically studied the effects of stroke on audiovisual integration. Interestingly, in our preliminary data we have found that some people with brain injuries actually have MORE trouble hearing speech when they are looking at the talkers’ lips. This may be because the brain damage has affected the timing of the AV speech integration process, effectively misaligning the signals and leading to perceptual interference. If this turns out to be true, we may be able to improve some people’s speech perception ability simply by instructing them NOT to look at the lips when listening to speech.”

Function 3: Integration of auditory and motor systems during speech production
Hickok: “Most people don’t realize that our auditory systems play an important role in speech production not just in speech perception. This has been a focus of my research for 15 years. Just like visual information about an object’s location, size, and shape is necessary to reach out and grasp that object, so, too, the motor speech system needs to have access to (previously learned and stored) memories about the sound targets of words that we speak. Our past work has identified the brain circuit involved, including the area we discovered (area Spt) and now we are assessing the effects of damage to the circuit. Stroke often affects people’s ability to speak and we have developed computer models that allow us to pinpoint the processing or computational source(s) of deficiency based on an analysis of errors in a simple picture naming task. What we will do in this project is validate this diagnostic procedure and map computational operations involved in speech production onto their corresponding brain circuits. This knowledge could lead to simple diagnostic tools for clinicians or even to new treatments using neural prostheses.