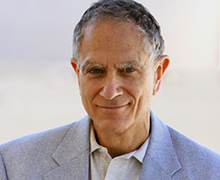 
David Malament, logic & philosophy of science Distinguished Professor emeritus, has been named a recipient of the 2014 Lakatos Award. The honor annually recognizes outstanding books published in the philosophy of science. For Malament, the award was given for his 2012 book, Topics in the Foundations of General Relativity and Newtonian Gravitation Theory, which presents the basic logical-mathematical structure of general relativity while considering a number of special topics concerning the foundations of general relativity and its relation to Newtonian gravitation theory.
Malament has spent his career working on the border between theoretical physics and philosophy; between space and time; and between science and science fiction. He is a leading figure in the specialized field of philosophy of physics, which straddles these fields.

“One often hears that there is no progress in philosophy,” says James Weatherall, logic and philosophy of science associate professor. “But David’s work shows how wrong that is. There are debates that dominated the field forty years ago, but which David simply ended by proving a theorem. And today, the discipline has been shaped by David’s approach to philosophy, which is on full display in the award winning book.”

Malement’s career, focused on mathematical and philosophical foundations of modern physics, started with a bachelor’s degree in mathematics from Columbia University, followed by a doctorate from Rockefeller University’s elite graduate philosophy program. He began consideration of large questions in the borderlands with his doctoral dissertation (on causal structure in relativity theory). Later, he expanded on the work of mathematician Kurt Godel: Godel had found a new solution to Einstein’s field equation (in the general theory of relativity) that allows for the possibility of “time travel,” and Malament investigated the energy requirements for such travel (how much fuel to put in the rocket ship). He’s worked on the “delicate and interesting question” of just what one means by “rotation” in the context of general relativity.

In 1992, he was named a fellow of the American Academy of Arts and Sciences while at the University of Chicago. He came to UCI in 1999 as a Distinguished Professor, after more than 20 years in Chicago where he held an endowed chair and was chair of the Committee on Conceptual Foundations of Science. Although he officially retired to emeritus status in spring 2012, Malament continues to be an active member of the research community in philosophy of physics at UCI.

Malament is UCI’s third Lakatos Award recipient; past UCI winners include Brian Skyrms and Pen Maddy, both logic & philosophy of science Distinguished Professors. UCI is now one of only two universities worldwide with three award winners; the other is the University of Michigan.

Joining Malament in receipt of this year’s honor is Gordon Belot, philosophy professor, University of Michigan, for his 2011 book, Geometric Possibility. Both will receive £7,500 and deliver a public lecture at the London School of Economics Department of Philosophy.