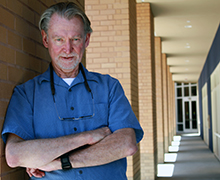 
Is the flu contagious? How would you rate your favorite college instructor on a 7-point scale? What do you estimate the probability of a Republican President to be in 2016?

Collecting group answers to questions like these employs Cultural Consensus Theory – one of the major statistical approaches used in the social and behavioral sciences – particularly anthropology – to learn if a group of people shares a consensus view. It was invented at UCI in the late 1980s by professors Bill Batchelder, cognitive sciences and Kim Romney, anthropology, along with several students, and Batchelder has now received a $260,000 grant from the National Science Foundation to expand the cognitive models and inference strategies behind the theory to handle more complex questioning.

“In the examples above, each question can be assessed independently,” he says. “But many questionnaire types involve responding to the relationship between two terms rather than a single aspect. For example, determining if two countries share a border, if two people are friends, or if two people share the same preferences for movies.”

These questions are complex to analyze, Batchelder explains, because each term can appear in several different questions, e.g. "Is John a friend of Mary?", "Is Bill a friend of Mary?", and "Is John a friend of Bill?" By extending current models to more accurately account for these types of questions, Batchelder hopes to expand the use of Cultural Consensus Theory as a methodological tool in areas such as education, forensic psychology, medical science, international relations and forecasting.

“There are real, applied areas where this type of modeling could be useful,” he says. “Expanded CCT could help us more accurately determine folk medical beliefs, extract truth from eyewitness reports, determine shared beliefs about grammaticality or ties in a social network, discover shared views about forecasting world events or optimal grades of essays examined by multiple graders, and so on.”

Funding for his work began September 1 and will run through August 2018.