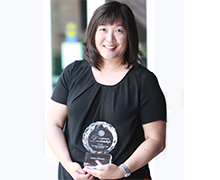 
As director of Social Sciences Undergraduate Affairs, Helen Morgan is in charge of making sure more than 20% of UCI’s undergraduate student population stays on track academically. Helping her in this far-from-small task is a staff of five full time advisors and 12 peer advisors, all of who provided full support for Morgan’s nomination as a recipient of this year’s Excellence in Leadership award. Awarded by UCI Staff Assembly, the honor annually recognizes up to three staff members who demonstrate outstanding leadership on campus.

Morgan’s professional career at UCI began with numerous treks through the tree-lined trails of Aldrich Park. A sociology alumnus, she worked her way through school as a campus tour guide and later as an academic peer advisor and graduate student recruiter. After finishing her degree in 1992, she continued on at UCI as a student services coordinator with the Office of Research and Graduate Studies (which has since split into two appropriately named campus divisions). Among her many accomplishments there, she counts meeting her husband, who currently directs the Office of Research, as the best. In 1997, Morgan returned to social sciences as an academic counselor where she quickly moved up the ranks to office manager and in 2001, was promoted to her current post as director.