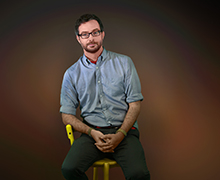 
Responsible. Democratic. Ethical. While these may sound like terms in a political science textbook, they’re actually pulled from furniture descriptions in IKEA catalogs and stores. That’s not by mistake, says UCI anthropologist Keith Murphy – it’s by deliberate design.

The author of the newly released Swedish Design: An Ethnography, Murphy has spent the past 10 years studying how furniture design in Sweden – home of IKEA, the world’s largest furniture retailer – has come to represent the country’s social democratic views. Through interviews with designers, academics, and government officials, he traces its roots to the 1920s and 30s when modernist design – simple squares, straight lines, basic circles – was beginning to take hold in Germany.

“The 30s were really a key period in Sweden’s history,” says Murphy. “Politicians were thinking about ways to improve society, and some of them were friends with Swedish designers who were looking to Germany and liking this new modernist design,” Murphy says. “Designers and architects, politicians and activists were all kind of behind this move toward bringing this look and feel into Sweden.”

As that happened, the simple, clean look of everyday things, like chairs and tables, was increasingly talked about with the same kind of language as the developing social democratic political system (unofficially dubbed “the people’s home” in the late 1920s), including words like “egalitarian,” “rational,” and “care.” The logic of this connection, says Murphy, was just as plain: if the new welfare state was meant to be a “home” for Sweden’s citizens, that home needed décor to match its political style. Over the course of the 20th century, the Social Democrats built what they saw as a simple, rational, and caring political system furnished in no small part by a simple, rational, and caring style of everyday design. Modernist design became Swedish, and it became the country’s symbol for political culture which is still strong today.

“It’s really one of the most successful forms of product placement you can think of - how things in our world, designed to populate our everyday life, are political,” says Murphy. “Politicians thought about the home as a site to target for political intervention. Everyone has a home, you want to make lives better, invest time and energy and resources into making home life something people enjoy.”

Enter the designers who helped make it happen through simple, modern furniture. While IKEA is the most prominent example for those in the U.S., this set of ideas and practices has been common in Sweden for nearly a century.

After interviews helped Murphy understand how the trend began, he wanted to know how and why it’s persisted and become such a mainstay in Swedish culture. With funding from the J. William Fulbright Foreign Scholarship Program and American-Scandinavian Foundation, he visited Sweden frequently from 2003-13, living in country from 2005-06. He spent a good chunk of time in design studios recording designers on video as they worked, collaborated with others and talked shop.

“This was kind of novel in anthropology; no one has ever looked at designers designing things,” says Murphy. “Researchers have talked to designers about what they do, but none observed or recorded them doing their designs.” This gave him an insider’s view on how these ideals have persisted in design, despite changing trends. He found that while the modernist move may have been intentional in the 30s, it persists now out of preference, not political pressure or angle.

“Designers aren’t intentionally reproducing squares and round images; they’re keeping the trend alive because they like the looks. What’s interesting is that even when they sometimes distance themselves from ‘typical-looking’ Swedish design, they still keep on making it, because the power of modernist design is still very strong.”