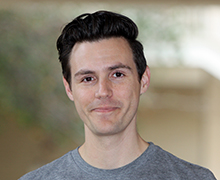 
John Manchak comes to UCI from the University of Washington, where he became an associate professor of philosophy in 2013. A philosopher of physics, his particular expertise is in general relativity and the structure of spacetime. His work has appeared in such venues as Philosophy of Science, Foundations of Physics, and The Oxford Handbook of Philosophy of Physics. He received both a B.A. in philosophy and a B.S. in physics from Brigham Young University in 2004, and a Ph.D. in logic and philosophy of science from UC Irvine in 2009.

Manchak joins Jeffrey Barrett and James Weatherall in LPS’s strong, active research group in the philosophy of physics which was recently ranked second in the world by the Philosophical Gourmet Report (tied with University of Michigan, Ann Arbor and University of Western Ontario).