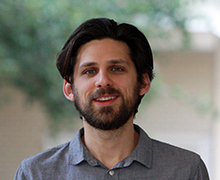 
How do international laws become domestic policy? Political science graduate student Mark Berlin has received a $21,600 National Science Foundation Fellowship Award to study this process. His research looks specifically at atrocity crimes – war crimes, genocide, crimes against humanity, torture – and the process through which nations have adopted domestic criminal prohibitions against such actions. His findings show that a redesign of a country’s criminal code provides an opportune time for anti-atrocity laws to become domesticated, allowing items to be made into law that would otherwise have not been high on a government’s agenda. Through statistical analysis and an in-depth look at the case of one country’s adoption of such laws, Berlin is hoping to provide a roadmap for policy makers interested in advancing international human rights norms at home. Funding for his work began in July and will run through June 2015.