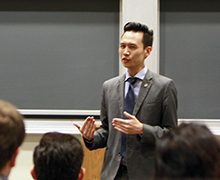 
Bao Nguyen is to a politician what Peter the Anteater is to a college mascot – different, kind of quirky and real enough that you find yourself wanting to get to know him. The 34-year-old UCI political science alumnus took his oath of office as mayor of Garden Grove December 9 and in doing so, became the youngest known leader in the city’s history. He’s also got another one for the record books, being the first Vietnamese American mayor in a U.S. city of more than 100,000.

But ask him about either and he’ll shrug them off, calling both his age and race labels. Hours before being sworn in, he explained the importance of diversity and label-less interests to a class of UCI undergraduates on California politics taught by Mark Petracca, one of Nguyen’s former professors and mentors.

“It’s the intersection of all points – age, race, gender, etc – that really matter,” he said. “Politicians try to cater to one point and that pigeonholes people with only one message.”

His has been a consistent one throughout his campaign; a message of transparency, no matter what the audience.

“I want to bring new politics to Orange County – be real and be the same in all spaces. You establish trust through transparency and you tell people this is your government,” he said. “Transparency holds everyone accountable.”

The message resonated with voters, landing him 15 votes ahead of the city’s 20+ year incumbent. One of his first items of business: putting the city’s financials online so voters will know where their dollars are going.

“You should expect politicians to explain themselves,” he said. “It’s important to the people – politicians are your representatives. The more people are engaged with politics, the better the system will be.”

When asked how he got interested in policymaking, he said, “I didn’t know I was going into politics – these are just the things I care about.”

He came to the U.S. when he was three months old. His parents fled Vietnam with his three siblings through an underground passageway; Nguyen was born shortly after in a refugee camp in Thailand. His family’s experience played a large role in shaping his identity, he says.

“I consider myself a bit of a risk taker,” he says. “My parents took a risk when they escaped Vietnam when my mom was 8 months pregnant with me – it’s in my blood.”

He credits his sister for opening his eyes to a college education while she was a student at UCSD, and both his Pacifica High School and UCI alma maters for his exposure to politics. As a high school student, he worked on Congresswoman Loretta Sanchez’s campaign. While at UCI, he interned with Democratic former California State Senator Joe Dunn.

“I have a unique opportunity to engage in OC politics because of UCI and my Garden Grove roots,” he said.

When Nguyen took his oath of office Dec 9 at Garden Grove’s City Hall, his UCI colors were flying high with School of Law dean Erwin Chemerinsky presiding over the ceremony.