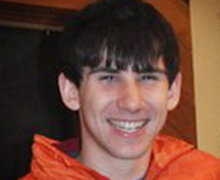 
Fourth year LPS graduate student Ben Feintzeig was awarded the 2014 Hanneke Janssen Memorial Prize for his papers “Hidden variables and Incompatible Observables in Quantum Mechanics” and “Can the Ontological Models Framework Accommodate Bohmian Mechanics?” The Janssen Prize, which is sponsored by Radboud University in Nijmegen, Netherlands, is awarded annually to the best paper(s) submitted in order to obtain a master's degree in the field of history and foundations of physics. Feintzeig's papers explore the role of probability theory in the foundations of quantum mechanics. Both papers have already been published in The British Journal for the Philosophy of Science and Studies in History and Philosophy of Modern Physics, respectively.  The prize includes 2,000 euros and an invitation to present lectures in Nijmegen and Utrecht.