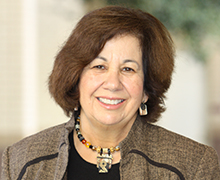 Ruiz was the first in her family to earn an advanced degree and has been a major force in shaping the field of Chicano/Latino studies. She has written extensively about the role of Mexican American women in the history of the U.S. Southwest and Pacific Coast. Her more than 35-year academic career has been spent studying and telling the historical accounts of Latina women as they fought for civil and labor rights.

In 2012, she became the first Latina historian inducted into the American Academy of Arts & Sciences. She is currently president-elect of the American Historical Association.

Her past honors include a presidential nomination to the National Council on the Humanities and Latina magazine’s “Woman of the Year” award in 2000.

In 2006, she co-edited Latinas in the United States: A Historical Encyclopedia. The three-volume set with more than 600 entries and 300 photographs documents contributions by women of Latin American birth or heritage to the economic and cultural development of the United States. It is the first comprehensive gathering of scholarship on Latinas, and it was named a 2007 Best in Reference book by the New York Public Library, and an Outstanding Title by the American Association of University Presses.

A graduate of Stanford University, Ruiz was inducted in 2009 into her alma mater’s Multicultural Alumni Hall of Fame, established in 1995 to recognize distinguished alumni of color.

She serves on one advisory board for the Smithsonian National Museum of American History. She also serves on the board of Imagining America: Scholars and Artists in Public Life, the national action research consortium. She has served as president of four major scholarly associations, including the Organization of American Historians and the American Studies Association.