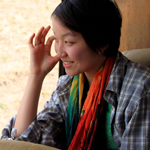 It’s one thing to say you want world peace. It’s another to go out and make it happen.

For political science undergraduate Christina Ong, that’s the goal, and in July, she received a boost from Microsoft for her efforts. Ong was one of five U.S. students named a winner in the technology giant’s Challenge for Change contest.

The $2,500 prize money and tech goodies she received – including an Xbox 360 and Windows 8 phone – are helping her create the groundwork for a global peace curriculum that will push the current and future generation to become “solutionaries” – using creative methods to solve problems in their communities and beyond. She’s working with Students for Global Peacebuilding, a UCI group associated with the Center for Citizen Peacebuilding at UCI, to develop a peace curriculum that could be made available to educators, students and policymakers. She’s also expanding the project to include new after school programs and conflict resolution training.

As part of the prize, she will also become a Microsoft YouthSpark Ambassador and travel to Kenya to see, firsthand, “change” projects in action. The trip will build on her previous experience working with Kenya Dream, a non-profit organization dedicated to building educational facilities in Africa.

Check out Ong’s contest video to learn more about her plans for peace.