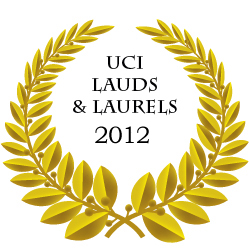 
Michael Gottfredson, executive vice chancellor and provost at UC Irvine, will receive the Extraordinarius award May 17 at the 42nd annual Lauds & Laurels ceremony, sponsored by the UCI Alumni Association. He is among 20 campus faculty, staff and students who will be honored. Social sciences recipients include David Snow, Distinguished Professor of sociology, with the Faculty Achievement award; James Weatherall, logic & philosophy of science graduate student, with the Outstanding Graduate Student award; and Nadia Bermudez, political science `98, with the Social Sciences Distinguished Alumni award.

“Lauds & Laurels is our opportunity to publicly recognize and thank those people who make a positive impact on the university and our community,” said Jorge Ancona, assistant vice chancellor for alumni relations and UCIAA executive director.

The event, which is being held in the UCI Student Center’s Pacific Ballroom, begins with a reception at 6 p.m.

Gottfredson has been widely praised for seeing the campus through unparalleled growth, even as the university faced significant budget challenges. In addition to his considerable workload as EVC/provost, he is a highly regarded criminologist who teaches freshman- and graduate-level classes.

He has also served on the endowment committee for Orange County United Way and on the boards of directors for the Orange County Technology Action Network and the Elliott Family Foundation.

This year’s Outstanding University Service recipients, Liz Toomey and Daniel Aldrich III, have lifelong ties to the campus. They are the children of UCI’s founding chancellor, the late Daniel G. Aldrich Jr. Toomey is assistant vice chancellor for community and government relations, and Aldrich recently completed a stint as interim vice chancellor for advancement.

James Newkirk is being named Honorary Alumnus. He and his wife, Martha, Ph.D. ’81, are longtime campus supporters. They have endowed two fellowships in social ecology, and their name is on the Newkirk Pavilion at Anteater Ballpark and the Newkirk Center for Science & Society. The couple recently made a donation allowing work to begin on the Newkirk Alumni Center, which is expected to be completed this fall.

Since the first Lauds & Laurels event in 1971, the UCI Alumni Association has recognized more than 700 people, but Lauds & Laurels is more than an awards ceremony, Ancona said. Net proceeds from table sponsorships and individual ticket sales go to the UCIAA student scholarship fund. Last year’s Lauds & Laurels gala raised about $55,000.

The complete roster of 2012 Lauds & Laurels honorees is: