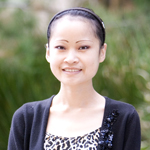 Zhang, a fourth year graduate student with degrees in economics (high honors) and legal studies from UC Berkeley, studies the emergence of international currencies and how dollarization, or adoption of a foreign currency by local citizens, impacts domestic economies.  She has developed an economic model that could be used by policy-makers to determine whether dollarization or continued use of a native, national currency is most conducive to a country’s welfare and stability.

Using historical experiences in Russia and several Latin American countries as case studies, Zhang finds currency substitution occurs in response to high inflation, but persists despite future stabilization. Her model shows that, though difficult, dollarization may be reversible through implementation of a simple government transaction policy that limits the use of foreign currency for payments.

"The model implies that small changes in economic fundamentals can induce a sizable regime shift where the economy’s payment system changes permanently,” she says. “This finding suggests that the current status of the dollar as the premier global currency cannot be taken for granted."

Her findings are especially relevant in terms of the current currency union crisis in Europe, says Guillaume Rocheteau, economics professor and one of Zhang’s advisors.

“Cathy’s work can explain the effect of inflation on exchange rate arrangements and why some arrangements are persistent even though they are socially inefficient,” he says. “Cathy is one of our very top students, and her research on liquidity in multi-currency economies is exciting and bound to have a big impact.”

“Cathy’s research has shown that economic decisions are not as sensitive to news as most economists would assume,” says William Branch, economics associate professor who is also a graduate advisor of Zhang’s.   “Her research has implications for many policy decisions that implicitly assume that any news about future policy changes will immediately impact people's spending and working decisions today.”

She has presented her findings at the Western Economic Association International Annual Conference in San Diego and she will be a presenter at the 2012 American Economic Association ASSA Annual Meetings in Chicago.  This fall, she is a visiting scholar at Monash University in Melbourne, Australia.

Zhang is the sixth student to receive the Kassouf Fellowship since its founding in 2006.