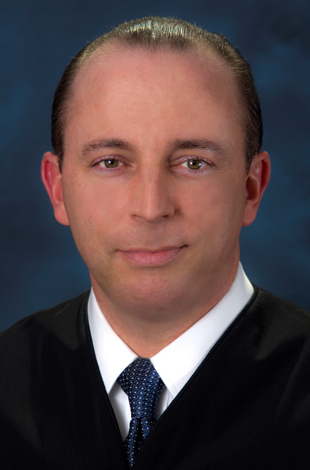 Scott A. Steiner, political science ’96, has held an interest in the justice system from an early age; at twelve-years-old, he showed up to his first formal costume party as a judge.  Now, 25 years later, he’s doing much more than dressing the part.  In June 2010, Steiner was elected to the bench of the Orange County Superior Court, following 11 years as an Orange County deputy district attorney where, among other duties, he headed the hate crimes prosecution unit.   A frequent campus career panelist and mentor, undergraduate political science guest lecturer, and presiding judge over UCI’s annual mock trial invitational, Judge Steiner’s continued connection to UCI and the local Orange County community in which he was raised have earned him the 2011 UCI Lauds & Laurels Outstanding Social Sciences Alumni Award.  Below, Steiner discusses his pathway to his current post as judge, and his love for both the law and his alma mater.

Q: What sparked your passion for a career in law?
A: As far back as I can remember, I always wanted to be involved in the justice system.  At a very young age, I was enchanted by the law and by the political processes which create and interpret it.  The law struck me as an area where if one is willing and able to devote considerable intellectual effort, the benefits of doing so are obvious in a way that seems more attenuated in other disciplines.  Work hard and learn the law, and very quickly thereafter, one will be given an opportunity to see the results. Now, as a judge, I preside over misdemeanor and felony jury trials and occasionally handle preliminary hearings and other law and motion matters.  My primary goal is to make a difference by making sure, on a case by case basis, that those who seek justice and the protection of the courts receive both.

Q: How did UCI and your major in political science help hone your interests?
A: I was born and raised in Orange, California and attended Villa Park High School. Having grown up in a political family (my father, William G. Steiner, was an elected official who had great influence on my career choice), I always found the political and legal processes that govern our daily lives fascinating.  Majoring in political science was an obvious choice, enabling me to explore those processes in greater detail, to understand them better, and to see how participating in them intelligently could affect my own life and the lives of others. I was always interested in receiving my education from the University of California, and knew of UCI’s reputation, particularly in the social sciences.  It was also my intent to live and work here in Orange County, so graduating from UCI, a school deeply connected to the very community in which I hoped to one day work was a great opportunity.

As an undergraduate, I was asked by several graduate students to work with professors Bernard Grofman and Russell Dalton on a few graduate level research projects.  As my understanding of political science began to take shape, I developed a keen interest in American politics and society especially, and my involvement with graduate students and their professors nurtured that interest.  Eventually, I undertook a senior honors thesis under professor Mark Petracca’s guidance that focused exclusively on the Orange County bankruptcy.  I loved being involved in research, so much so that I continued in law school at the University of California Hastings College of the Law and while pursuing my LL.M. in prosecutorial sciences at Chapman’s School of Law, using the experience I gained at UCI to author published articles in both those settings.

Q: On your road to the bench, what kinds of challenges did you face?
A: I think the biggest challenge I faced was my unsuccessful bid for election to a local city council.  It was a tough pill to swallow at the time, but I learned a great deal about how to conduct myself on the campaign trail, and how professional success is often a function of just how bad one wants a job and how much work it takes to get there.  So while losing that race over ten years ago was a disappointment, I think that that defeat did more to help me succeed in my campaign for judge than any other single event.  Prior to being elected judge, I had the opportunity to be appointed to the City of Orange Planning Commission in 2006, and to chair that commission for two years.  The chance to handle administrative hearings there, some of which were quite complex and occasionally contentious, was invaluable training for my work on the bench.

Q: What role has UCI played in your success?
A: I look back on the four years I spent at UCI and I know that they changed my life in ways I’m still just beginning to realize.  All the accomplishments since that time are rooted in the foundation UCI provided.  I’ve just been building on the experiences I had there.  Everything that’s happened to me, all the career achievements and personal success is because of four short years in my life, years I spent at UCI. Of course, I attribute one of my greatest accomplishments of all to UCI; as a sophomore there, I met and later married a certain UCI undergraduate who now has been my wife for going on 13 years, Caron (Tam) Steiner.  We now have a daughter, Sylvia, whose presence has marked a sort of turning point for me, in that now everything in my life either happened before she was born, or after.