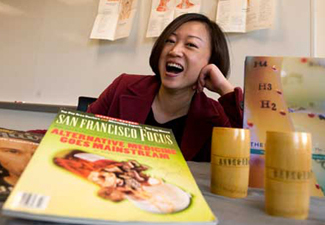 Since it began offering Ph.D.s in 1994, UC Irvine’s Department of Anthropology has quickly become one of the country’s leading graduate programs, evidenced by 2011 National Research Council rankings which place the doctoral program among the nation’s top ten in anthropology. While one of the youngest, the program – which annually enrolls roughly 50 students -  sits comfortably alongside prestigious and much larger programs at Stanford, UC Berkeley and UCLA, says acting department chair and professor Karen Leonard who provided an interpretation of the council’s ranking methodology.

“Our anthropology department is at the forefront of innovation in anthropological research,” says Leonard. Topics explored include ethnomusicology; gender issues; immigration; markets and finance; science, medicine and technology; transnationalism and virtual worlds - studies which have taken UCI anthropologists everywhere from rural and urban Asia, Africa and Latin America to the virtual world of cyberspace to better understand global cultures and societal norms.

Research findings, she adds, have led to major advances in these fields including the discovery of a link between poverty and diabetes, answers to how and why Chinese leadership came to adopt the one-child policy, and discovery of new ways in which technology can and is helping people in the developing worlds save money.

“We are extraordinarily proud to see four of our doctoral students — working under four different faculty supervisors — among the 40 writers of the most exciting cultural anthropology North American dissertations in 2010,” says Bill Maurer, anthropology professor and advisor to Allison Fish, one of the students recognized for her graduate work.

Two graduate students from other UCs – one from UCSD and one from UC Berkeley - were also among the top 40.

“UCI’s success in the field of cultural anthropology, and anthropology in general, is a testament to the hard work, diligence and academic strength of our faculty and students,” says Leonard. Learn more about UCI anthropology online.