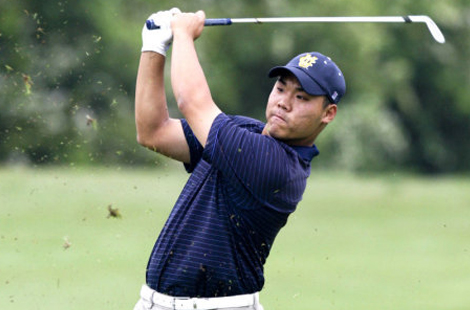 John Chin, a 2010 All-American at UCI, received the Golfstat Cup trophy at the Jan. 22 homecoming men's basketball game in the Bren Events Center. The nation's top-ranked collegiate golfer last season, Chin was awarded the trophy by Golfstat founder Mark Laesch (pictured). As a senior sociology undergraduate at UCI in 2009-10, Chin ranked No. 1 in the final 2010 Golfstat Cup, with a 70.05 average, and finished first in four tournaments. He also made the 2010 Golfweek and Ping All-America first team (a first in UCI's NCAA Division I history) and was named to the 2010 All-Nicklaus team. Additionally, Chin was a three-time Big West Conference Golfer of the Year and two-time medalist at the Big West championship - including in 2010, when he won the 54-hole tournament by nine shots. Chin made his professional debut at the Reno-Tahoe Open last July.