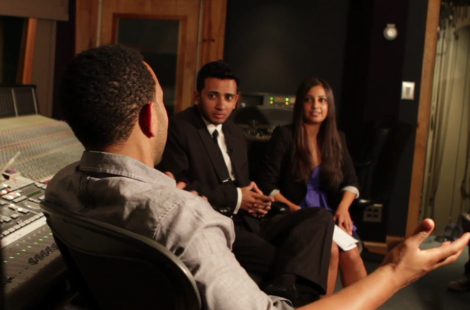 When 20-year-old Shawn Isaac began working for the Coachella Valley Economic Partnership  (CVEP), he never expected the job would lead to winning a "Get Close to John Legend" Wendy's and MySpace Music contest.  But that's exactly what happened.

Isaac entered the contest after watching recording artist John Legend on a MySpace video advise viewers to submit a two minute video answering the question, "What have you done to make a positive impact on your community?"

An admirer of John Legend's dedication to community, Isaac submitted an entry in which he explained how his volunteer work at homeless shelters led to his decision to apply for work with CVEP because of its mission to bring jobs and improve the regional economy and quality of life.  A former California Boys' State Delegate and a Rotary International Youth Leadership Award recipient, he is co-founder of a technology company, ALU Enterprises, founder of Shawn Isaac Productions and Management, and has been featured on MTV.

To further enhance his contest entry, Isaac flew from Southern California to Springfield, Ohio, Legend's hometown, where he videotaped community improvement projects to include in his two-minute video submission.

Isaac was selected as the Grand Prize winner from the entire MySpace international community of applicants. He chose his sister Tonya, a longtime Legend fan, to accompany him on the five-day New York visit. The prize included an opportunity to interview John Legend, enjoy a private studio performance, and hang out with the six-time Grammy award winner.