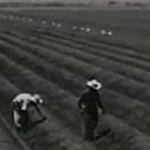 Arizona’s controversial new immigration law has reignited heated debates on how best to address the country’s growing number of undocumented immigrants.  In looking to future policies and programs, says Gilbert Gonzalez, Chicano/Latino studies professor, it’s important to reexamine the past. In a new documentary, “The Harvest of Loneliness: The Bracero Program,” Gonzalez and Vivian Price, an alumna of UCI's political science doctoral program, explore the historical accounts of migrant Mexican farm workers brought into the U.S. from 1942-1964 under the temporary contract worker program known as the Bracero Program. Prior to the film's premiere at the UCI Film and Video Center’s “Cosecha Latina” series, the co-directors offered insight on its creation and lessons it can teach us about potential new immigration reform.

How did the Bracero Program come into existence?
In 1942, the United States embarked upon a series of guest worker agreements with Mexico known as the Bracero Program on the grounds that a wartime labor shortage existed and that extra workers were required to supplement the domestic labor force in agriculture and railroads. Employers requested so many men – and only men – that Washington sent the request to Mexico, and men were recruited by the Mexican government. They were physically evaluated and transported north to work.  When the war ended, the imported workers were channeled exclusively into agriculture. Some 28 states received several million braceros, as the men were known, in a wartime program that lasted until 1964, long after the war ended.

What did you seek out to accomplish when you started filming your documentary on the program?
The film is an extension of research into why the program existed far beyond its intended stop date.  Did the labor shortage persist – or did it ever exist?  We sought answers in the responses of subjects we interviewed which included researchers who studied the program extensively.  According to their historical accounts, the program was created to undermine labor unionization and secure a controlled labor force in agriculture. During the 1930s, California experienced 170 agriculture labor strikes.  One of the landowners hit hardest by the numerous worker strikes was Charles Teague, president of Sunkist and a key lobbyist in the Bracero Program’s beginnings. He made the case to Washington that a labor importation program was necessary for the war effort, and Congress approved. However, there was never any concrete evidence produced which indicated that a labor shortage existed. Following the signing of the agreement and the arrival of imported Mexican labor, neither successful union organizing nor strikes occurred because, as one interviewee said, “braceros were a growers dream.”  According to the contracts each bracero signed, they could not join a union, negotiate over wages, or strike. Moreover, research revealed that when domestic workers were available, growers petitioned instead for cheaper braceros and employed them in violation of the international agreement.

How are your findings important in the current immigration debate?
The documentary sheds light upon one of the more important historical examples of guest worker programs, a major component in current immigration reform policy debates. During the 22 years of its existence, the Bracero Program was presented to the public via newscasts, newspapers, journals and government publications as an ideal program that uplifted the economy of Mexico and satisfied the need for workers in the United States, a  "lifts all boats" thesis.  The reality was much different as former braceros recollect harsh treatment, poor working conditions, low pay, wage cheating, bad food, poor living conditions and loneliness being away from their families and villages. The women and children left behind speak of villages emptied of men who were shipped out to work and the loneliness and insecurity they experienced in having to fend for themselves. Promoted as a means for boosting both the U.S. and Mexican economies, interviewees tell that nothing changed in the Mexican countryside while the U.S. rose to become a world agricultural powerhouse. The Bracero Program is an example of a guest worker program that was implemented solely to ensure accessible, cheap, controlled and disposable labor with little regard for the negative impact it had on Mexican families involved.  As we explore new guest worker propositions in current immigration policy discussions, program intent must be scrutinized in order to ensure the best interests of all involved parties are taken into account, and lessons learned from the Bracero Program are a good place to start.

“The Harvest of Loneliness: The Bracero Program” will premiere Thursday, May 20, 2010 in the Humanities Instructional Building (HIB) 100 with a reception at 6:15 p.m. and screening beginning at 7:00 p.m.  A Q & A with the directors will follow.